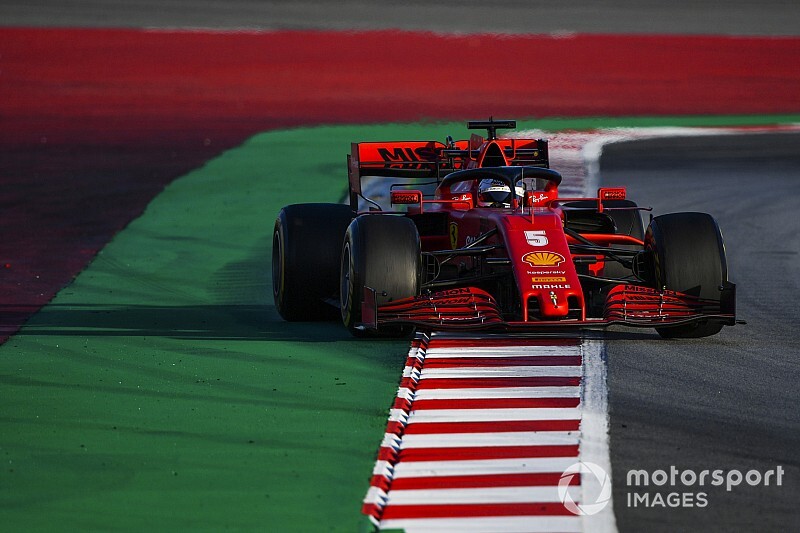 Sebastian Vettel says Ferrari’s new Formula 1 car is a “bit draggy”, causing it to trail its rivals for straight-line speed through pre-season testing.

Vettel completed his final extended run in the 2020 Ferrari car on Thursday before the start of the season, racking up 144 laps en route to setting the fastest time of the day. But Vettel’s time was still over a second slower than the best overall lap, set by Mercedes rival Valtteri Bottas last week.

Ferrari has downplayed its chances in the early part of the season throughout testing, saying it is a step behind Mercedes and Red Bull. The team placed a focus on improving the cornering ability of the new car – somewhere it struggled in last year – but its straight-line speed has been compromised as a result.

Asked by Motorsport.com about the cornering performance, Vettel explained that while the car had improved in this area, it was now on the back-foot on straight-line speed.

“We can feel the car is better, I think Sector 3 feels better,” Vettel said. “We also know that it does come with a trade. We still have some work to do, we are slower than we want down the straights because we are a bit draggy.

“We are aware of that, but the objective was to put more downforce on the car which I think we did. Sector 3 does feel better, but obviously getting out of Sector 3 and down to Turn 1 doesn’t feel as good as last year.

“Certainly in the corners is where you feel the difference, and where we improved, but it looks like others are even a bit faster. That’s where we are I guess. There’s a lot of work to do.”

“We worked very hard over winter, and I think our car is a step forward. Currently it does come with some more drag, but I think we are aware,” Vettel said. “We are pushing as hard as we can to get rid of the drag and make it more efficient. But we also believe that come race day, it gives us an advantage the way it is set up now, so we will see.

“I think it will be key to obviously develop the car, especially since it seems that we’re not the very fastest right now.”

Mercedes hinted last week that Ferrari had been deliberately running its power unit at a low level – something the team denied – in order to downplay its true pace.

While Vettel conceded it was “hard to compare” the front-running teams given their varying testing programmes, he said Ferrari’s performance had still done little to wow the F1 paddock.

"I think if you look at the big teams, then nobody is really trying to do anything fancy,” Vettel said. “I think most of the work is done in the background and you don’t really see. I’m curious to really see where we are in Australia. But for sure, it’s not like we leave the very strongest impression right now.

“I’m not worried, and if it is so then it is like this, but we will know in a couple of weeks’ time – not now, not tomorrow.”

Why Vettel is not yet done with annoying Ferrari