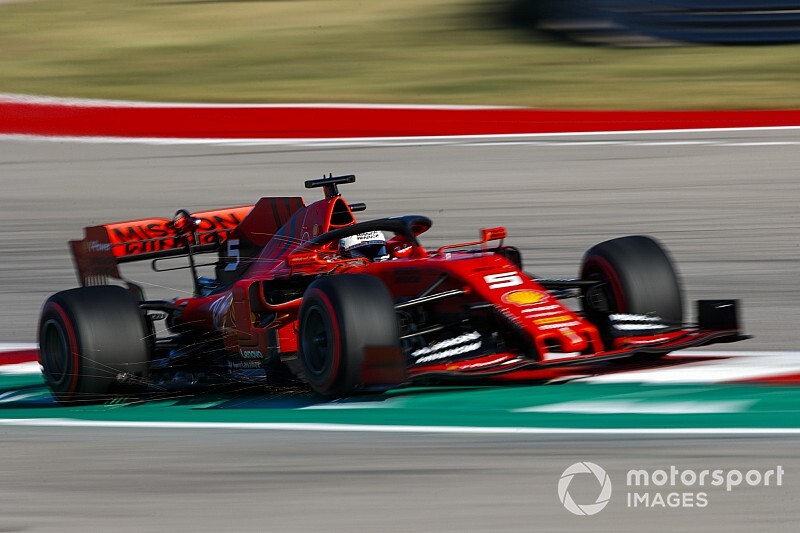 Sebastian Vettel has admitted he regrets being so conservative on his first run in Q3 for the United States Grand Prix after missing out on pole position to Valtteri Bottas by just 0.012 seconds.

The Ferrari driver finished the first Q3 attempts just behind his Mercedes rival, but was confident about doing better on the final run because he had taken things quite easy in the final sector to ensure he had a solid banker lap.

But Vettel's hopes of snatching the top spot were derailed when the track conditions fell away at the end of the session, leaving both him and the pole position man unable to improve on their final laps.

Speaking afterwards, Vettel said such a small margin of difference between second and first was hard to accept – especially because he left time on the table during his first run.

"Obviously it was a very nice session, really fun to drive the car this afternoon, but if you are so close to pole and just on the wrong side of it, then I guess Valtteri had a bit more fun.

"It was okay. The gap was very small, only one or two hundredths, that is always there.

"I had a very good first lap and had some margin in the last sector. I was maybe taking it a little bit too conservative making sure I should have finished the lap and set the lap first, and then improve on the second lap.

"Unfortunately I didn't improve, so my plan didn't quite work. Overall it was good. I think we will have a strong race tomorrow as the car felt better today than yesterday which is also what we needed."

Bottas said that the key to his turnaround in form from a difficult practice day on Friday was a big overhaul of his setup overnight.

"I am really happy about that, it was a nice lap at the beginning of Q3 to get those kind of laps, and on a track like this it is a good feeling," he said.

"Yesterday was tricky, there many things not quite right with my car but we managed to find all the reasons and it was good work this morning with finding all the details and good time. I knew how to bring it together but to bring it together was a nice feeling for Q3."

With the Finn needing to win the race to have any hope of taking the world championship battle on to the next race in Brazil, he said there was a level of confidence about his chances based on how strong Mercedes normally is in the race.

"We've seen recently normally on Sundays we've been competitive, so it's very good starting from pole here," he explained.

"There are some corners that are difficult to follow for the cars behind, and we have the pace. That will be the only thing in my mind for tomorrow. Only a very, very small part of the weekend is done."