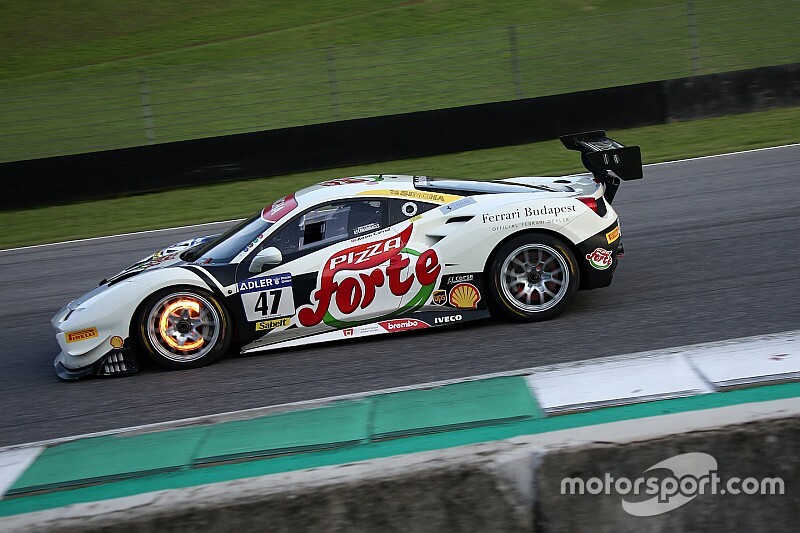 Ex-Formula E racer Carroll started from pole courtesy of setting the fastest qualifying lap in any session during the weekend, and saw off heavy pressure first from Ferrari Challenge Europe runner-up Niccolo Schiro (Rossocorsa) and then Grossmann (Octane 126) to score his fourth win of the year by 0.4s at the flag.

Schiro, who was temporarily awarded the title until a steward's review into overtaking under yellow flags at the start of race two instated Louis Prette as champion, made the best start from third and shot down Carroll’s inside into turn one.

But he had to take a very acute angle into the corner, which allowed Carroll to duck underneath and re-pass him on the corner exit.

Schiro tried again to pass Carroll at the outside of turn one following a safety car for an incident involving Pirelli-Am competitors John Megrue and Emanuele Tabacchi, but was unable to stay with the Northern Irishman thereafter and appeared to miss a gear on the pit straight starting lap 11, which allowed Grossmann through.

The German, who had passed front-row starter Prette for third into turn one on lap five, then closed in on Carroll but was unable to launch a passing attempt into his favourite corner, with yellow flags flying following an off for Ross Chouest.

Schiro completed the podium in third, with Grossmann’s teammate Fabienne Wohlwend coming through to fourth.

The W Series racer had spent much of the race stuck behind Prette before diving up the inside of the final corner on lap eight, only to lose out to both Prette and Thomas Neubauer on the corner exit.

Undeterred, Wohlwend fought back past Neubauer and was in position to capitalise when Prette ran wide at Arrabiata 2 on the penultimate lap, with Prette also falling victim to Neubauer shortly afterwards to finish a disappointing sixth.

European Pirelli-Am champion Tabacchi fought back from a poor start and his clash with Megrue at turn three to win class in seventh overall. His late pass on Matus Vyboh (Scuderia Corsa) at turn four secured victory, with Tommaso Rocca completing the class podium.

Nobuhiro Imada was the top Asia-Pacific finisher in 11th after five-time series champion Philippe Prette spun on the first lap. Imada was one place ahead of sole North-American finisher Marc Muzzo, as both title protagonists Cooper MacNeil and Benjamin Hites elected not to start.