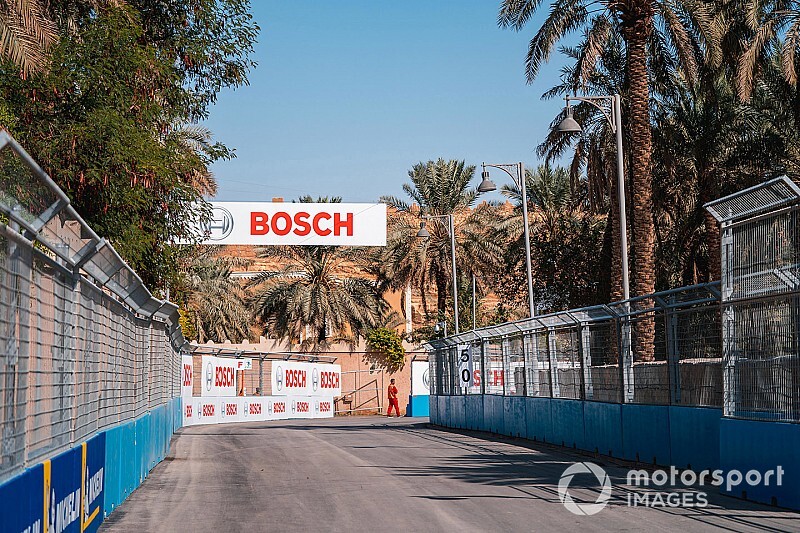 The track surface at Formula E’s Diriyah E-Prix circuit has been largely re-laid ahead of the 2019 event following the drainage issues that blighted the inaugural event last year.

Motorsport.com understands that approximately 80% of the asphalt has been re-laid at the 1.5-mile circuit, with several large manhole covers now installed in the undulating first and second sectors – where pools of water collected during the rain-affected practice sessions and caused the timetable for the 2018 event to be heavily revised.

When asked about the changes by Motorsport.com in the pre-race press conference for the 2019-20 season-opening event, reigning champion Jean-Eric Vergne said they had made that section of track “quite slippery and therefore a little bit bumpy”.

Porsche’s Andre Lotterer explained that “it's more the dirt [sitting on the new surface] that will play an affect in changing the grip” for the drivers – an issue that several racers highlighted after inspecting the track.

“They've obviously added more drainage because of the issues we had last year, and the Tarmac around the drains already seems to be like it's crumbling a little bit after the I-PACE [Jaguar eTrophy support series running]. So, we need to see how that goes.”

Nissan e.dams driver Sebastien Buemi pointed out that for drivers in the first qualifying group – the top six finishers in the 2018-19 championship, Vergne, Buemi, Audi’s Lucas di Grassi, Virgin driver Robin Frijns, Mitch Evans (Jaguar) and Lotterer’s replacement at DS Techeetah, Antonio Felix da Costa  – the sandy surface “unfortunately might be very hard” as it will likely lead to a significant track evolution advantage for the drivers in later groups.

“I've seen some of the new Tarmac - some places are already ripping apart,” he added to Motorsport.com.

“It might be something like Santiago [back in January where the track broke apart significantly in the intense heat] in a few places.

But regarding the slippery state of the new track surface, NIO 333 driver Oliver Turvey said: “The natural environment [in Riyadh] is quite dusty”.

“The [actual] track surface, the Tarmac looks quite OK, quite good quality – compared to some of the tracks we're race on it's quite smooth,” he continued to Motorsport.com.

Thursday’s timetable at the Diriyah track included the usual shakedown session, with the drivers limited to running at 110kW.

When asked by Motorsport.com why this change has been made, BMW Andretti team boss Roger Griffiths said: “The thinking behind it is, we come back to many of these places time and again, so we really started to question: do we need a shakedown session at all?

“Then on the flip side, we're also looking at how we become a cost effective championship. And do we really need that shakedown?

“The movement from six laps to three is a step in that direction – to easing us away from potentially having a shakedown in later seasons.

“Maybe we’d keep it for new races but not for ones we're coming back to.

“If you think back to where Formula E started, we were shaking-down two cars. So, two cars, three laps each, six laps [total]. Now, back to one car, just logically you go back to just three laps.

“The original concept of it has changed dramatically and hence that maybe its relevance is important [but it’s] perhaps diminished somewhat in why we need it.”