Pascal Wehrlein became the first driver to take a second pole in the 2018/19 ABB FIA Formula E season as he topped a blustery qualifying session for the Paris E-Prix. 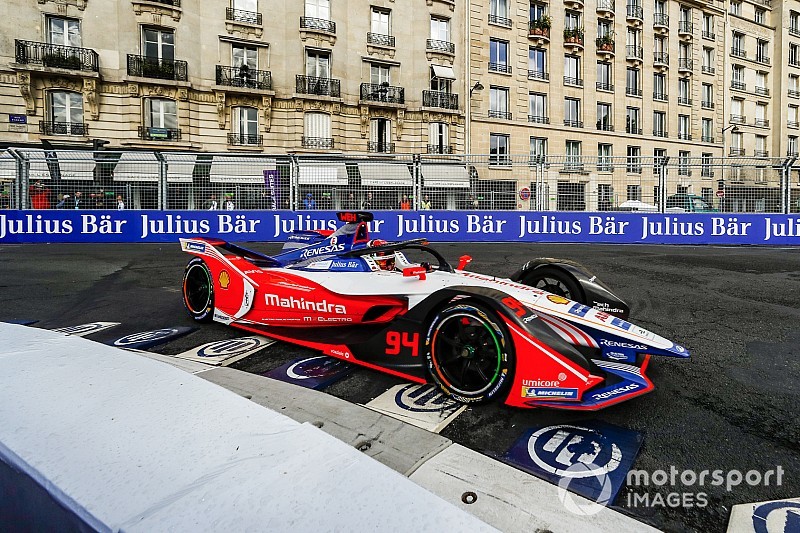 The Mahindra Racing driver will start ahead of Nissan e.dams pair Oliver Rowland and Sebastien Buemi, with the current standings leaders scattered down the rest of the grid.

Wehrlein, Rowland and Buemi all made it through to Super Pole from the third set in the initial group running, with the latter session featuring a significant amount of debris blown from the trees lining the start-line straight.

The more-technical second sector proved to be the key to getting pole as Wehrlein nailed that segment as he raced to a time of 1m00.338s in Super Pole.

Rowland was up after the first sector but lost time at precisely the point where Wehrlein was fastest and although the Briton clawed back a chunk of time in the final sector he wound up 0.152s adrift. Buemi finished a further 0.02s behind his teammate.

Robin Frijns (Envision Virgin) produced the most aggressive lap in Super Pole – coming very close to clipping the wall at the fast and tight exit from the Turn 10 right-hander – and briefly topped the times before he was shuffled back to fourth.

Felipe Massa (Venturi) was another group three runner to make it through to Super Pole and wound up fifth, later complaining about the build-up of tree droppings on the exit of Turn 2 on the approach to what will be the grid for Saturday’s race.

Championship leader Jerome d’Ambrosio was the only group one runner to qualify for Super Pole and will start sixth after setting a second lap that was 0.924s slower than his teammate Wehrlein.

Maximilian Gunther took seventh for Dragon Racing as the top driver not to feature in Super Pole, ahead of Andre Lotterer (DS Techeetah). Daniel Abt and Lucas di Grassi rounded out the top 10 for Audi.

Reigning champion Jean-Eric Vergne (DS Techeetah) headed a small gaggle of championship contenders in 14th, with Sam Bird – who did not get to complete a dry lap in practice after he crashed at the end of FP1 – and Antonio Felix da Costa P15 and P16.

Rome winner Mitch Evans ended up down in 20th as the slowest of the group one runners for Jaguar.

HWA’s Stoffel Vandoorne locked up at Turn 3 – the race’s first corner – and lost time on his effort, with that corner also costing Jose Maria Lopez. Vandoorne will start 21st.

Lopez (Dragon Racing) had to take to the escape road and ended up losing so much time he finished with a 1m07.494s, which is outside the 107 percent rule for this track. The stewards have given him permission to start the race.