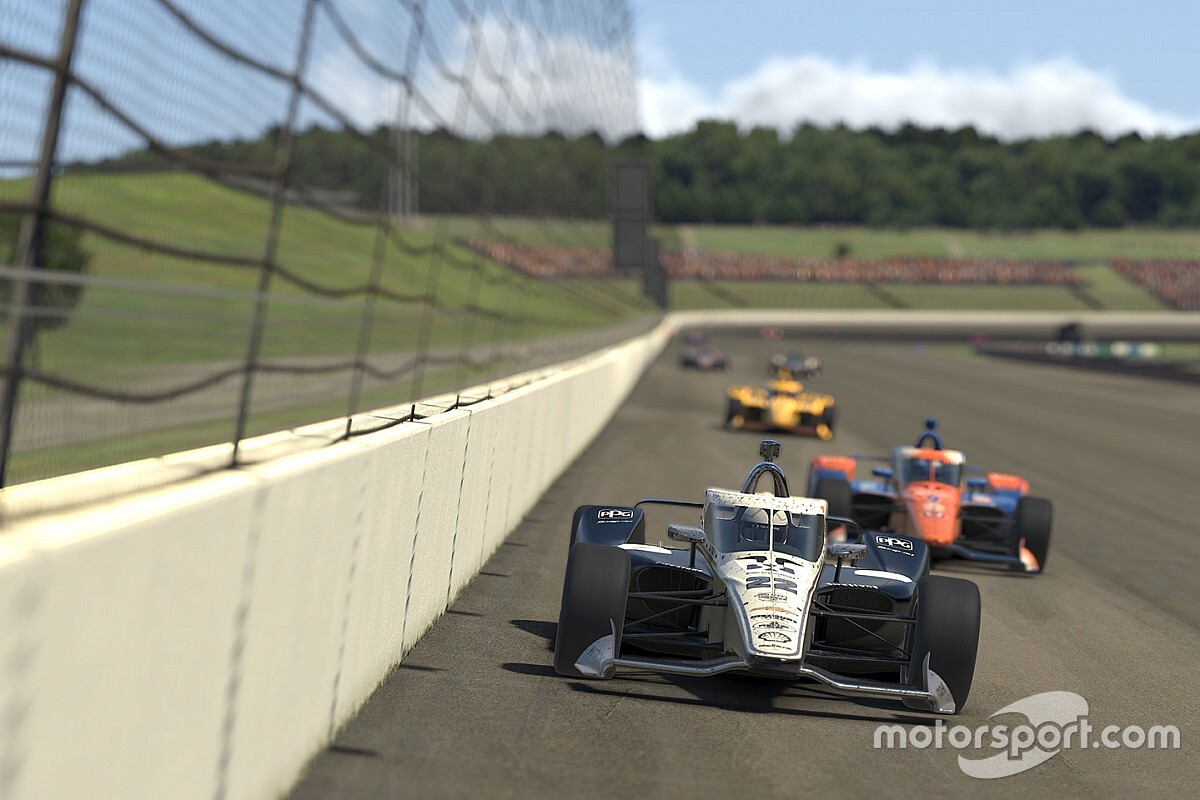 For the second week running, the 2016 IndyCar champion and 2019 Indy 500 winner Simon Pagenaud won an IndyCar iRacing Challenge race, this time after watching his Team Penske-Chevrolet teammates Will Power and Scott McLaughlin collide after Power was struck by a lapped car at virtual Twin-Ring Motegi.

The Arrow McLaren SP-Chevrolet of Robert Wickens took a fine pole position and led away from Power, but Jack Harvey’s Meyer Shank Racing-Honda and Oliver Askew in a second McLaren hung tough. As they hassled Wickens and Power, the two leaders rubbed against each other and lost momentum, Power dropping to fourth, and Wickens to 11th. Then the yellow flew on Lap 5 after the fifth Penske entry of Challenge debutant Helio Castroneves saved a slide but was then collected by two backmarkers.

At the restart, Power moved past Marcus Ericsson who also lost a spot to Chip Ganassi Racing-Honda teammate Scott Dixon, and then the 2014 champ moved into the lead ahead of both Askew and Harvey.

Soon Harvey was not only trying to keep up with Power but also defend from the increasingly impressive Dixon, who until three weeks ago hadn’t raced on this platform. This trio separated themselves from Askew who ran just ahead of Ericsson and virtual Barber Motorsports Park winner Scott McLaughlin of Penske until Lap 27, when Ericsson lost out to both. Askew’s next task was to watch his mirrors for virtual Michigan winner Simon Pagenaud and the recovering Wickens.

As Power moved one second ahead of his pursuers, Dixon passed Harvey for second, leaving the MSR driver to fend off the increasingly threatening McLaughlin, the double Supercars champion sweeping past into third on Lap 40.

Pit stops started on Lap 43, but McLaughlin didn’t stop until Lap 49, while Power left it until 50, and Dixon and Pagenaud pitted on Lap 52.

Early stoppers Sage Karam of Dreyer & Reinbold Racing-Chevy, Josef Newgarden (Penske) and Takuma Sato (iRacing debutant in the Rahal Letterman Lanigan Racing-Honda) briefly moved into the top three. Once they pitted, Power was back up front, pressured by two fellow Antipodeans, McLaughlin and Dixon. In fourth ran Pagenaud ahead of Ericsson and Harvey.

On the 66th of the 113 laps, Dixon finally made it around McLaughlin and swiftly drafted up on Power but his inside pass for the lead lasted just half a turn before Power swept back ahead. On Lap 74, the Ganassi driver’s diving maneuver worked for a little longer, this pair swapped the lead back and forth before Dixon started edging away. Power started dropping back into the clutches of teammates McLaughlin and Pagenaud.

Pagenaud dived for pitroad with 28 laps to go, and the three leaders did the same next time by. That left Ericsson up front until he too pitted, promoting Zach Veach’s Andretti Autosport-Honda to P1.

Power performed best in the pits and out of them, and McLaughlin and Pagenaud also got ahead of Dixon. Up front, Newgarden was trying to eke out his fuel, drastically cutting his lap times but with 14 to go, Josef pitted. Despite that, it was still a Penske 1-2-3 up front, Power ahead of McLaughlin, with Dixon not quite able to get on terms with Pagenaud.

Then Askew, trying to unlap himself, took a dive down the inside of the battling Penske leaders, washing up into Power who tagged McLaughlin. The collision sent McLaughlin spinning into the wall and ripped off Power’s right-front wing. That allowed Pagenaud to take the lead – after banging wheels with a very defensive Power – and although Dixon closed up on the #22 Penske driver and took a look down the inside at Turn 1 on the final lap, the 2019 Indy 500 winner held on by 0.342sec to score his second consecutive iRacing win.

Behind Dixon, Power maintained his top-four finishing record with another podium, ahead of Ericsson, Wickens, and Harvey.

Round 1 (Watkins Glen) winner Karam was first of the early stoppers home in seventh, ahead of Veach, Dale Coyne Racing with Vasser Sullivan’s Santino Ferrucci, and the ever improving Graham Rahal (RLLR).

Reigning and two-time NASCAR Cup champion Kyle Busch was a very respectable 13th on his virtual IndyCar debut – despite running a stick-shift simulator – while the unfortunate McLaughlin was classified 24th.