Turner Motorsport’s dominant win at Canadian Tire Motorsport Park on Sunday marked the 20th consecutive season in which the team has scored at least one pro win, and the 59th IMSA triumph for Bill Auberlen.

Following Robby Foley’s inaugural IMSA WeatherTech SportsCar Championship pole position on Saturday, he and Auberlen went on to lead 92 of 94 laps of the 2.459-mile CTMP track on Sunday, their BMW M6 rarely looking under threat.

The blue and yellow car sustained slight body panel damage in the opening stint when Trent Hindman’s Meyer Shank Racing Acura NSX nuzzled alongside it in an overly optimistic passing attempt through Turns 5 and 6. Then, following the final restart, Hindman’s co-driver Mario Farnbacher was able to sustain the pressure on Auberlen and crossed the line within one second of the BMW. Besides that, the M6’s victory charge rarely looked under threat.

Thus, after a near-miss at Watkins Glen a week earlier, Auberlen recorded his 59th IMSA win – all scored with BMW – which lifts him to within one victory of Scott Pruett’s all-time record.

“This win came at just the right time for all of us at Turner Motorsport,” said Auberlen. “It feels amazing to get this win after working so hard to get to the top step of the podium. I can’t say enough about all the guys at Turner Motorsport and of course my co-driver Robby Foley.”

Added Foley: “There is just so much to say here. I clinched my first career pole this weekend and converted it into my first career win in IMSA as well. The Turner Motorsport team has been amazing this season and their extremely hard work finally paid off today.”

Team owner Will Turner commented: “I’m so happy for our entire team who have worked so hard over the last year since our last win at Watkins Glen last season. We have had a good deal of tough luck and adversity but we kept our heads up and found some rhythm to clinch a second and a first place back-to-back.” 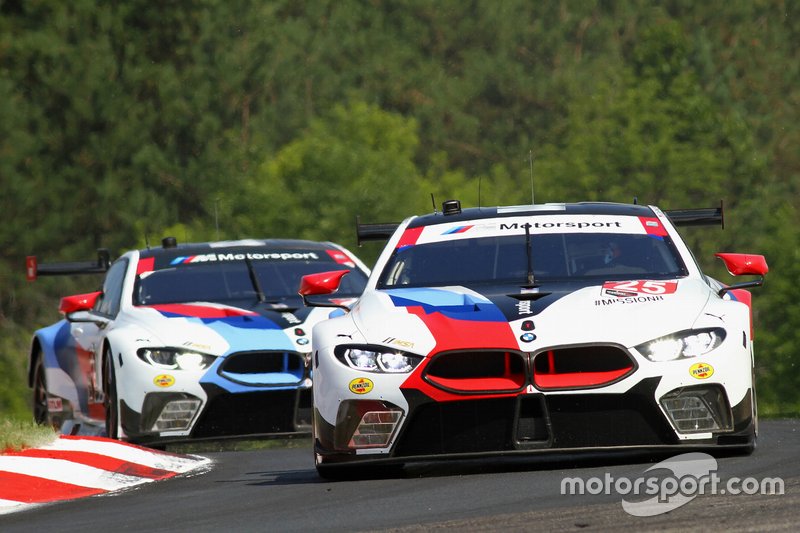 The works BMW M8s run by Rahal Letterman Lanigan Racing locked out the front row of the grid in the GT Le Mans class, but the chances of a double BMW triumph at CTMP were ruined when the #912 Porsche 911 RSR went slightly off-strategy by making its first stop 11 laps earlier than the competition. Its driver Earl Bamber then nailed some scintillating laps on a relatively clear track and jumped ahead of all his rivals once they made their first stops.

Following the late-race restart, the pole-winning M8 of Jesse Krohn/John Edwards kept the Porsche under pressure but while Edwards could match the 911’s lap times, he couldn’t find a way past by the checkered flag.

Meanwhile the #25 BMW of Tom Blomqvist and Connor de Phillippi dropped to fifth at the start which would define that entry’s race. De Phillippi, like Edwards, spent the final stint staring at the rear of a 911 – that of Nick Tandy and Patrick Pilet – trying in vain to displace it from the final podium position.

Zanardi, Auberlen to be inducted into Long Beach Walk of Fame