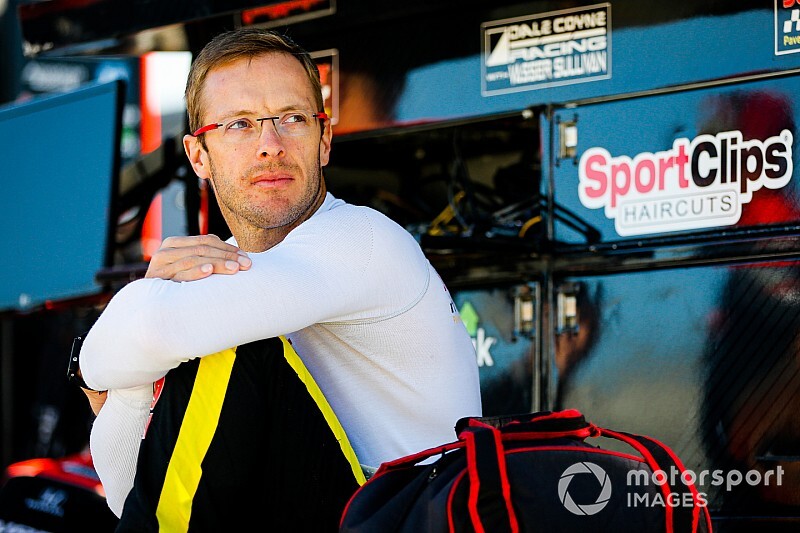 IndyCar wrapped up its own trial runs of the aeroscreen with a simulated street course test at Sebring Raceway today, and Sebastien Bourdais says he was left deeply impressed by the quality of the work.

WThe Dale Coyne Racing with Vasser-Sullivan driver said the visibility from the cockpit was near impeccable – a surprising achievement given the tightness of the beam around which screen curves.

“You always have reservations going into something like this, but I think IndyCar, Red Bull and the team behind it have done a really nice job,” the four-time champion told Motorsport.com. “The quality of the screen is remarkable, and they’ve come up with enough cooling options where they can definitely get it right."

While fellow Sebring tester Pato O'Ward in the Arrow McLaren SP-Chevrolet struggled to get enough air channeled to his helmet, Bourdais said that remedies would be easy to find.

“It was pretty hot today, and although it wasn’t as comfortable as an open cockpit, they should be able to get it to an acceptable place heat-wise, so I definitely give it a thumbs-up. The pallet of tools for dealing with the heat are there.

“I could definitely use a little bit bigger scoop for the helmet vents, but that’s just details, and I think IndyCar is still tweaking it to learn the best place to take the air. I don’t see anything that’s insurmountable.

“I suppose there’s a couple of scenarios we don’t know about yet, like in the wet if someone goes off in front of you, and throws up a bunch of dirt, it’s harder to clean a screen than it is to clean a helmet visor. But mostly we run in the dry.

“I don’t know… I just think the screen is such a major advancement for safety that anything else we put up with and get around the problem.”

One of the pre-test concerns over Bourdais and the aeroscreen is that he wears glasses, which could have amplified any distortion issues. In fact, he said, there was very little irregularity through the Red Bull Applied Technology screen.

“I have driven a lot of sportscar prototypes and GTs that had very poor screen quality even though it wasn’t a very complicated windscreen, but I was very happily surprised by the quality of the IndyCar aeroscreen. The curvature it’s got meant that I expected a lot of distortion but I was really impressed. There is a little distortion at around 45 degrees in that peak of curvature – you can see people go a little slimmer or a little fatter – but it’s really, really not a big deal. I’m really impressed that they pulled it off.”

Handling wise, Bourdais said the car did feel noticeably different with its higher center of gravity and more forward weight balance, both caused by the screen.

“It feels heavier, like you’re always carrying a full load of fuel,” he remarked. “You feel the inertia and the car doesn’t have the same kind of retardation that it normally has: it’s easier to lock the tires earlier than you should. I think the cars will be half a second to three-quarters of a second per lap slower just due to weight, because that’s just physics with a 55lb piece in a not-ideal place on the car. But in terms of the spectacle, it’s going to have no effect: no one will see those differences.”

Bourdais also played down expectations that the revised weight distribution would require radical changes by Firestone to its front tires.

“Well the first thing to say is that I do believe we could do with harder tires on street courses anyway,” he said. “It reduces the marbles, and I always like harder tires because you can just punish them and push hard and get more and more and more speed. So I’m always in that favor.

“But we ran on a hot day today with normal tires and even with the extra weight, the tire wear wasn’t really any worse than we have on similar days [without the screen], so it’s not a must. And actually, we’re going to start the season with what we’ve got because Firestone’s street course batches are made already. Down the road, are they going to make adjustments? Yeah, probably – I think all things are under consideration right now.

“For the ovals, I think the right front is going to change for Texas, but from what I’ve heard about the other ovals, I didn’t see any predictions that there would be concerns. Nothing that can’t be fixed by setup at least.”