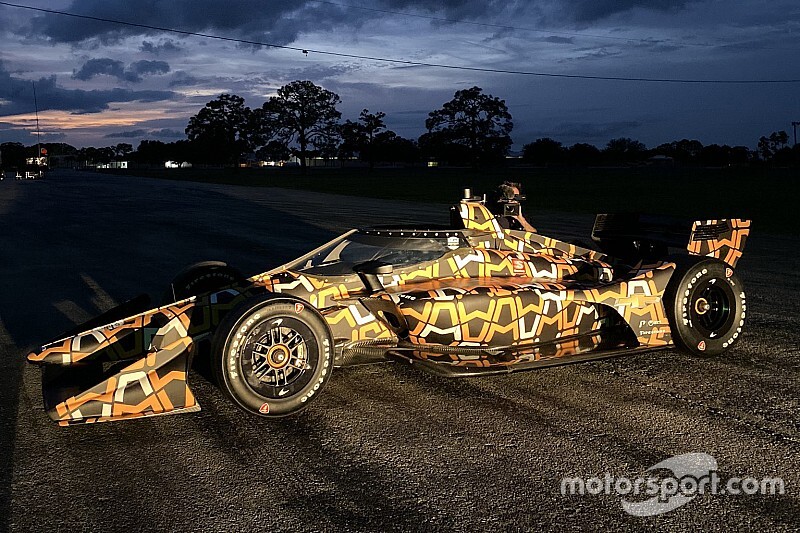 Patricio O’Ward had his first IndyCar test since departing the series in June, turning around 100 laps at Sebring Raceway in the Arrow McLaren SP-Chevrolet, but said getting airflow toward the helmet with the aeroscreen in place is something that still needs to be addressed.

The 2018 Indy Lights champion, who was a Red Bull Junior driver in Super Formula through the summer, has joined the Arrow McLaren SP team for 2020 where he will be joined by his successor as Lights champion Oliver Askew.

Although, Askew was at Sebring, he attended as an observer only, because the test was for IndyCar rather than the team, as the series attempts to finalize the configuration of the new aeroscreen. The other team in action was Dale Coyne Racing with Sebastien Bourdais and, briefly, Santino Ferrucci.

O’Ward told Motorsport.com: “It was really good to be back, and I think I adapted back pretty quick so I could start giving feedback to the team.

“The seating position compared with Super Formula is quite different so it took one or two laps to get acclimated. Braking-wise the IndyCar feels different, power-wise and downforce-wise they’re pretty similar, but the Super Formula car is quite a bit lighter. But I honestly didn’t struggle that much.

“I went through five sets of tires and put about 20 laps on each, and me and Will [Anderson, race engineer for the #5 car] got along right off the bat. Everything I asked for from the car, he found a solution to, and everything I had to change technique-wise I could do very quickly. We progressed really well.”

Regarding this first test for both team and driver with the aeroscreen in situ, O’Ward was happy with his view from the cockpit but less so with the temperatures.

“The halo structure and windscreen are fine – visibility-wise, we see everything we need to see,” he said. “The biggest issue was getting air into the cockpit where we wanted it to be. We found a pretty good solution to channel air to the top of my legs, but sending air to the visor opening when the visor was up is something that needs to be fixed. It was decently hot – probably the high 80s – and humid as well, which made it a good test for hot conditions. And getting a strong air current to the visor opening is something that has yet to be found.

“We tried a lot of different configurations, which consumed a lot of time, but that’s fine. That was the nature of the day. We only started really working on the setups.”

O’Ward will next test the car along with teammate Askew in mid-January.

Despite the disrupted day, Anderson – who previously engineered at what was Schmidt Peterson Motorsport for Simon Pagenaud and then James Hinchcliffe – felt his new driver provided feedback that belied the fact he has made just eight IndyCar starts.

“Pato’s feedback was really good,” Anderson told Motorsport.com, “better than I had initially expected, given his limited experience. He could split up the corners into segments, diagnose and describe what the car was doing at each point – I was impressed. That’s something you really look for in rookies – how much have they learned through previous years, working in different cars?

“And then looking at the data in terms of how he drives the car, I think that’s encouraging too. His driving-style suits what this era of IndyCar wants.”

Anderson said the team’s initial preparations for the aeroscreen, in terms of the CoG moving higher and the balance moving more toward the front, had paid off.

“I think we arrived at the track pretty close to where we wanted to be,” he said. “We had done a lot of homework on the simulation side and we arrived at the track with a package that we felt would be pretty good balance-wise for Sebring. I mean, it’s hard to judge because Sebring is Sebring and the grip levels shift quite a bit, but I think we can still do better once we’re allowed to test for ourselves rather than IndyCar and then we can change more.

“For the same reason, it’s hard to compare the engines now that we’ve switched to Chevrolet: it was great to have the Pratt & Miller and Ilmor guys getting us up to speed quickly, but corner exit speeds are hard to judge because the conditions were different compared with when we last tested at Sebring.

“I don’t think there’s a huge discrepancy, but without giving away too much, I think the Chevy is really strong and I think we’ll enjoy working with them.”

Penske foresees no conflict of interest as IndyCar, IMS owner