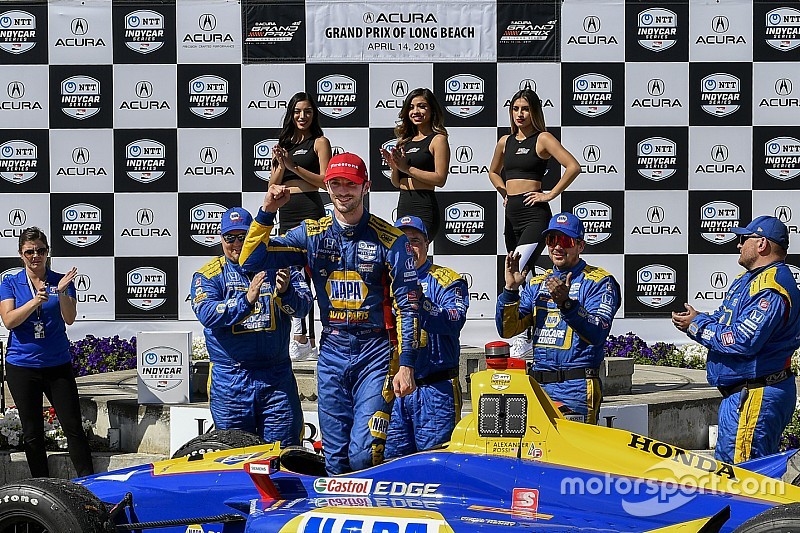 At the start, Scott Dixon initially tucked in behind Rossi, but then pulled alongside on the outside before being edged wide by the polesitter. Dixon took the hint and tucked his Chip Ganassi Racing-Honda in behind the leader, followed by the Team Penske-Chevrolets of Will Power and Newgarden.

Their teammate Simon Pagenaud had slipped back from fifth to seventh behind Graham Rahal’s RLLR-Honda and Ryan Hunter-Reay (Andretti), both of whom had gone for black primary tires at the start, unlike their immediate opposition.

At the back there was trouble however, Spencer Pigot, Marcus Ericsson and Jack Harvey colliding and stalling at Turn 3, bringing out the full-course caution. Matheus Leist was also involved, obliging him to come in for a new front wing for the AJ Foyt Racing-Chevy. Arrow Schmidt Peterson Motorsports’ Ericsson was adjudged at fault for the pile-up and was issued a drive-through penalty.

The restart came at the end of Lap 4, and Dixon went at the same time as Rossi and again threatened him on the outside down to Turn 1, but again was firmly rebuffed.

On Lap 7, into the fountain turn, Harding Steinbrenner Racing’s Colton Herta made a bold move down the inside of former Indy Lights teammate Patricio O’Ward (Carlin-Chevy), and the Mexican’s lost momentum saw him also fall behind the second Ganassi car of Felix Rosenqvist and Marco Andretti (Andretti) by the end of the lap.

The following lap, Dale Coyne Racing’s Sebastien Bourdais and Santino Ferrucci pulled past, and the word from the pits was that O’Ward was trying to save fuel. It looked a bit excessive when he fell to 16th on Lap 9.

Up front Rossi was setting fastest laps, and Dixon was matching him, staying within 1.5sec, the pair of them over 3sec ahead of Power who by Lap 11 had a 2sec lead over Newgarden. Josef was having to keep an eye in his mirrors for Rahal and Hunter-Reay, who were dueling over fifth.

On Lap 13, Rossi’s lead over Dixon was 2sec, as the Andretti Autosport ace laid down fastest lap after fastest lap on his red tires. At the 17-lap mark, that advantage was over 4sec, with Power now keeping pace with Dixon, keeping his deficit under three seconds. In the outer reaches of the top 10, Herta and Rosenqvist were within a second of each other and eighth-placed Takuma Sato.

Rossi’s new reds had helped him pull 7sec over Dixon (on used reds) by Lap 24, and Power was closing in on the second-placed car.

James Hinchcliffe’s Arrow SPM car ducked into the pits from 13th to change to red tires on Lap 25 and Hunter-Reay, Bourdais and Andretti did the same, switching from blacks to reds.

On Lap 26, Rossi stopped for primary tires and Dixon followed suit, leaving Power briefly up front although he ducked in next time by, and Newgarden stopped the following lap. Newgarden emerged in front of Power who in turn had come out ahead of Dixon.

Once everyone had stopped, however, Rossi still had a 6sec lead, while Power had Dixon, Rahal and Hunter-Reay – the latter two on reds – lined up behind him. When Power got held up by Harvey, Dixon was all over the #12 Penske and when it lagged exiting the hairpin due to an overboost, the Ganassi car started pulling along the inside for Turn 1.

Power left his braking too late and skated down the escape road, rejoining in eighth ahead of Hinchcliffe, Rosenqvist, Bourdais and Herta.

By Lap 40, Rossi was 10sec clear of Newgarden who was under pressure from Dixon. Just over 1sec behind the Ganassi driver was Rahal and 1sec behind him was Hunter-Reay.

Herta understeered into the wall at Turn 9 on Lap 52, obliging him to pit and retire.

On Lap 54 Hunter-Reay and Andretti stopped for more red tires, while both RLLR cars also pulled in. Rossi, having had his chances burned by a full-course caution at COTA by leaving his last pitstop too late, ducked in on Lap 56, and Dixon did likewise but had a dreadful stop – 18.6sec – due to the fuel hose not connecting properly.

Once the pitstops shook out, Dixon was down in fifth, behind the still-dominant Rossi, Newgarden, Rahal and Hunter-Reay. Five seconds behind him were Pagenaud, whose nearest threat was now Power, whose #12 crew had jumped him ahead of Sato.

Rossi’s race was trouble-free over the remaining laps, despite a gesticulation at a troublesome backmarker, and he held his lead over Newgarden at around 10sec. The Penske driver could do nothing about it, but nor was he troubled by third-placed Rahal who sat 3.5sec down, and was more focused on defending from Hunter-Reay.

Hunter-Reay started to feel the pressure from Dixon into the final 15 laps. Pagenaud in sixth ran 13sec behind, one second ahead of Power, the pair of them now five seconds clear of Sato.

On Lap 82, Hunter-Reay was slow exiting Turn 8, as he went to “full emergency fuel-save mode”, and Dixon went by to snatch fourth. Dixon closed on Rahal, and Rahal locked his brake into Turn 8 on the final lap. The RLLR driver – now out of push-to-pass boost – swung right to cover the inside line, Dixon was going the same way and his front wing nudged Rahal’s right rear.

Dixon, hitting his push to pass, continued tailing the RLLR machine and the five-time champion felt Rahal had blocked him in reaction to his move. Race Control agreed, and Dixon was granted third place.

Rossi’s winning margin was 20sec over Newgarden, having led 80 of the 85 laps to complete his sixth victory and first of the season.

Behind the Dixon/Rahal battle, Hunter-Reay easily held onto fifth to beat the Penskes of Pagenaud and Power, while Sato, Hinchcliffe and Rosenqvist completed the Top 10.