Maverick Vinales beat Marc Marquez to top second practice for this weekend's Grand Prix of the Americas at Austin, as Honda debuted a Ducati-style winglet on its MotoGP bike. 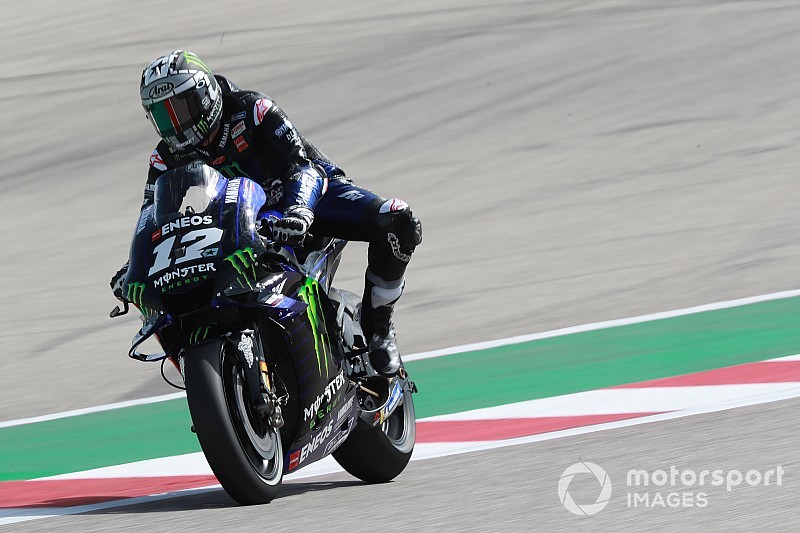 Honda had already gained the approval of MotoGP technical director Danny Aldridge to use its version of the controversial appendage first used by Ducati in Qatar, with the winglet finally breaking cover on Marquez's bike during the Spaniard's second run.

By that stage, the reigning champion had already beaten his benchmark time from the morning's opening practice session, moving to the top on a 2m05.276s early on, before laying down a 2m04.719s on his next lap.

That remained the lap to beat until the final five minutes of the session, when the soft-tyre runs began in earnest, but Marquez found himself giving a tow to the Pramac Ducati of Jack Miller - who duly set a time 0.005s faster to take the top spot.

Next time round, Marquez was on course for the fastest time but pulled over late in the lap to allow Miller by. But moments before, Yamaha rider Vinales had eclipsed both Miller and Marquez riding on his own, setting a 2m03.857s.

Marquez tried to respond on his final flying lap, but had to settle for second, falling short of Vinales' time by 0.044s.

Valentino Rossi briefly made it a Yamaha 1-2 with his 2m04.003s lap, and ended up third, just over a tenth slower than Marquez and 0.002s up on Miller in fourth.

LCR Honda's Cal Crutchlow completed the top five, followed by Alex Rins on the Suzuki and KTM's Pol Espargaro, who profited from sitting behind Andrea Dovizioso's Ducati on his best lap.

Dovizioso was the biggest name to miss out on a space in the top 10, ending up almost a tenth down on Bagnaia, and with rain forecast for Saturday morning the Italian faces having to fight through the first segment of qualifying.