In this week's edition of the NASCAR Roundtable, we preview the All-Star Race and Alex Bowman's chances of breaking into Victory Lane at Charlotte. 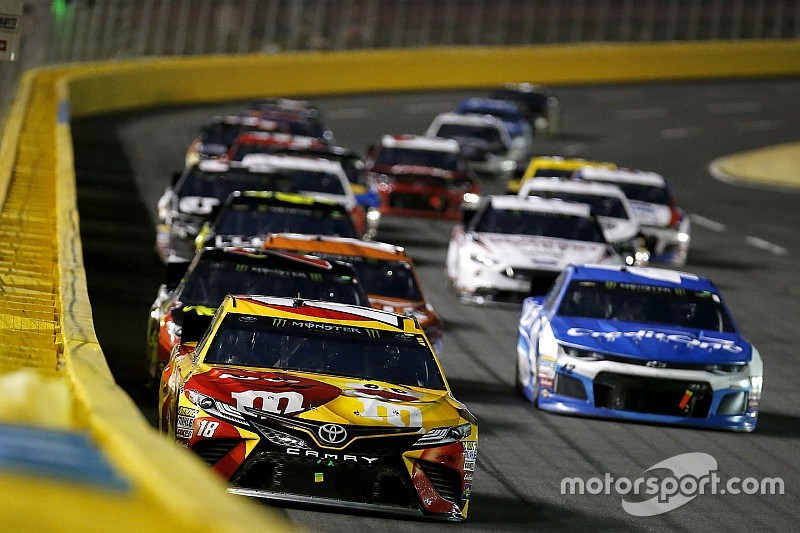 Brad Keselowski seemingly came out of nowhere to score his third Monster Energy NASCAR Cup Series win of the season at Kansas Speedway. Are you surprised that Keselowski equaled Busch in wins this season?

Jim: Given how strong Team Penske has been in general, I'm not surprised at all that Keselowski has equaled Kyle Busch's win total on the season. What was surprising was how Keselowski went about doing it. For much of the first two stages at Kansas, he - nor anyone else from Team Penske - were able to get up front and didn't appear to have anything to contend for the win. The hard work his team did on making his No. 2 Ford better throughout the race certainly paid off as he found himself in the thick of a multi-driver battle for the win late in the race. And a superb restart in overtime sealed his victory.

Nick: Nope. Team Penske has been strong from the get-go and Brad Keselowski equaling Kyle Busch is no surprise. I'm more surprised that Kevin Harvick has yet to win a single race.

Tim: Based on how it seems it has been Team Penske or either Joe Gibbs Racing winning up until a few weeks ago I was surprised to see Keselowski have three wins. What surprised me was how he won at Kansas. It appeared for 95% of the race it was either Kevin Harvick, Chase Elliott or Alex Bowman was going to be the winner, then Keselowski seemed to come out of nowhere late in the race.

Judging by the 'eyeball' test, this appeared to be one of the most competitive and entertaining races on a 1.5-mile track in a long time. What where your thoughts on the race and is the new rules package moving in the right direction?

Jim: I think Saturday night's race is what NASCAR envisioned seeing from the rules package after the excitement of last year's All-Star Race in Charlotte. Until Kansas, we had seen glimpses of what was possible at Las Vegas and Texas but clearly everything fell into place at Kansas, with cooler temperatures and a night race. Considering Charlotte is where the basis for the rules package debuted last season, one would think we could be in store for a couple more weeks of very entertaining races. The results of the first third of the season, however, may show that a one-size-fits-all rules package this season may not have been the best approach. I see little evidence in the form of the package used at shorter tracks has been of much benefit (other than perhaps Bristol).

Nick: For what it is, that was a successful showing of the package. I expect Charlotte will put on a similar show, but there is still a lot of work to be done. There are tracks where this package works well and others where the racing has actually been worse. I still think they need to get the cars off the ground but that doesn't seem be in the cards for the near-future.

Tim: I think last Saturday’s race was one that NASCAR and its teams needed desperately and I thought it was one of the best races on an intermediate track in years. I still think it’s too early to give the new rules package a final grade, however, if the races keep working out like last weekend’s race, I feel NASCAR might finally be in a good place with the package.

Alex Bowman has clearly turned the corner in the Cup Series finishing second in three consecutive races. What are the chances of him getting his first win in the All-Star Race, similar to Michael Waltrip.

Jim: Assuming Bowman is at least as good at Charlotte as he was at Kansas, I find that quite possible. I could also see him capture his first Cup series points victory the following weekend in the Coca-Cola 600, which has a history of producing some unexpected first-time winners. Bowman may be frustrated by his inability to close the deal by going to Victory Lane, but the more times you put yourself in position to win, the better the odds you actually will.

Nick: Alex Bowman will be a threat if he makes the field for the All-Star Race, which I think he will. And should he take the million, that confidence might just carry over into next week and he can join an ever-growing list of drivers who earned their first Cup Series victory in the 600. In fact, he currently leads the Fan Vote ahead of the race weekend.

Tim: I think it’s very possible and likely we’ll see Alex Bowman win one of the next two races at Charlotte Motor Speedway if not both the All-Star and Coca-Cola 600 races. He’s shown that his car has speed and he just needs to close a race out to celebrate a win. It would be a great storyline for Hendrick Motorsports and NASCAR if he scores his first Cup Series win in Charlotte just like NASCAR Hall of Famer Jeff Gordon did as well early in his career.

Jim: Although I'm unclear exactly how the new rules (related to the Gen-7 car) will affect the on track product, given how the 2019 package ran at Kansas, I expect a competitive All-Star Race for the second year in a row. I'm going with Alex Bowman, William Byron and Kyle Larson racing their way into the all-star field and I'm going with Kevin Harvick repeating as all-star race winner

Nick: It's going to be interesting with some components of package for the Gen-7 car involved. I expect it to be a lot like last year -- a  tight, hectic race with a lot of attrition and close battles.

Tim: While I know I just answered above that I feel Alex Bowman could win the race, I honestly think we’ll see a veteran come through with the win. Based on the rules package being used with two new rules to cars to be experimented this weekend I think that gives a veteran driver a very slight edge. I think we could see Kyle Busch, Kevin Harvick or Clint Bowyer in Victory Lane this Saturday night.