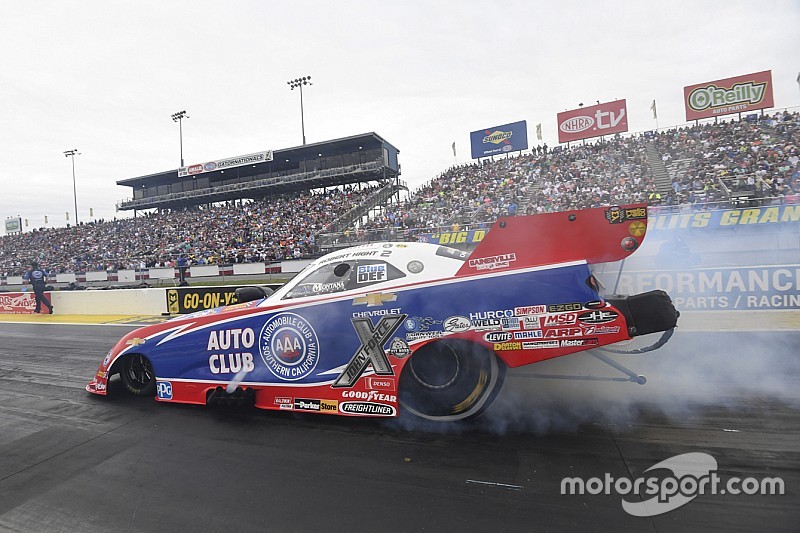 Hight claimed his second Funny Car triumph of the season with a run of 3.867 at 331.61 in his Auto Club of Southern California Chevrolet Camaro SS to defeat Tim Wilkerson. After earning his third No. 1 qualifier of the season on Saturday, Hight secured his second Wally of the season and 47th of his career.

“Qualifying No. 1 at the first three races is really impressive,” Hight said. “It shows that we have a really good handle on this car.

“We didn’t get the job done on the last day of the season last year and my team worked really hard because they don’t want to be in that spot again.”

Crampton locked in his first victory since this event last year on a holeshot win against Clay Millican, with a pass of 3.769-seconds at 329.89 mph in his DHL / Kalitta Air dragster.

“This is just a big race no matter what year you win it,” Crampton stated of his ninth career Top Fuel victory. “There were not too many easy rounds this year. That goes to tell you how difficult this Top Fuel category is. I think this win is going to take a while to sink in. I’m so lucky to have a team that puts me in a position to win like this. I’m just focusing to be a dependable driver.”

Millican, who raced to his second career final round at the facility, started from the No. 7 position and defeated Austin Prock, Jordan Vandergriff and veteran Doug Kalitta before the final.

The 2017 Pro Stock champion Butner powered his Jim Butner’s Auto Chevrolet Camaro to victory with a run of 6.505 at 212.29 over Alex Laughlin. Like Hight, this was Butner’s second win of the season.

“I had no shot of winning rounds today,” Butner stated. “Second and third round we didn’t get down the track. The KB guys never gave up and I made the best run of the weekend in the finals. We were real ready for the final.”

Butner qualified in the No. 5 position and defeated Fernando Cuadro, Deric Kramer and No. 1 qualifier Rodger Brogdon who red-lit in the semi-finals. Laughlin bested veterans Jason Line, Greg Anderson and Kenny Delco before facing Butner.

Hines raced to his first win since the 2017 season finale with a run of 6.752 at 199.17 on his Screamin’ Eagle Vance and Hines Harley-Davidson Street Rod. That was enough to defeat his teammate and defending event winner Eddie Krawiec.

“The motorcycle I had this weekend was phenomenal,” Hines said. “It was tracking straight down the track and it responded to all of the changes. That made it so much easier to focus on going out there and racing, cutting good lights and not really worrying about what could happen the very next run.”

Krawiec was the No. 2 qualifier for the event and defeated Scott Pollacheck, Jim Underdahl and Joey Gladstone en route to his fourth consecutive final round at this facility.