Fernando Alonso says he is "extremely happy" that the #8 Toyota crew was able to extend its FIA World Endurance Championship points advantage over the sister car by such a wide margin at Spa.

Along with Sebastien Buemi and Kazuki Nakajima, Alonso claimed a fourth win of the 2018/19 WEC superseason in treacherous conditions at the Belgian track, while the #7 Toyota TS050 Hybrid could manage only a sixth-place finish after losing four laps to a brake sensor failure.

It means Mike Conway, Kamui Kobayashi and Jose Maria Lopez, who realistically needed to win at Spa to keep their title hopes alive, are 31 points down with only 39 left up for grabs in next month's season finale, the Le Mans 24 Hours.

Alonso, who had revealed ahead of the Spa race that he values winning the WEC title over a second Le Mans triumph, suggested events at Spa made up for the #8 crew losing out on higher scores earlier in the season, notably in last year's Silverstone and Shanghai races.

"It was a difficult race with the changeable conditions, so you needed to be ready for anything that may happen," commented Alonso. "Also the tyre selection was quite difficult. You never knew what tyres to put on with dry, the inters, the full wets.

"But overall it was quite extreme conditions for everyone, and on the personal side, extremely happy with the points for the championship today.

"Definitely it was a big hit today in terms of points. I’m thinking of Silverstone [where both Toyotas were excluded but the #8 crew finished ahead] or Shanghai [where pit strategy put the #7 car ahead], we probably deserved a lot more points than what we have and with those points we were already mathematically champions.

"Now we [just] need to finish in Le Mans. They [the #7 crew] need a lot to happen to us and nothing to them. If we try to copy their race, we can be safe."

Alonso also shouldered the blame for a brief spin at Pouhon while running in second, prior to the #7 Toyota's issues, that only cost the #8 crew a small amount of time.

"It was a driver mistake," he admitted. "I touched the astroturf and it definitely was not dry. Luckily it was not having any consequences in that kind of area. It was together with a full-course yellow, in combination with everything I didn’t lose much time."

The 31-point gap between the two Toyota crews means that Alonso, Buemi and Nakajima need only to score a seventh-place finish at Le Mans to put the title out of reach.

Conway said he was convinced that, even with late safety cars bunching up the field, he and his teammates in the #7 TS050 Hybrid had the measure of the #8 drivers at Spa.

He told Motorsport.com: "We were the fastest car out there, nearly won, but [we had] some bad luck. I think we had the pace in all conditions, in the dry we were flying.

"[To win the title] the sister car would have to not finish Le Mans, which is not something we want. So it’s not looking so good. But we fight to the end and we see what Le Mans brings."

Lopez added: "We did everything possible. [The failure] is something we can’t manage. We did what we had to do – try to win. We led by 55 seconds when we had the problem.

"We don’t have anything to lose now at Le Mans. We can attack and try to win the race." 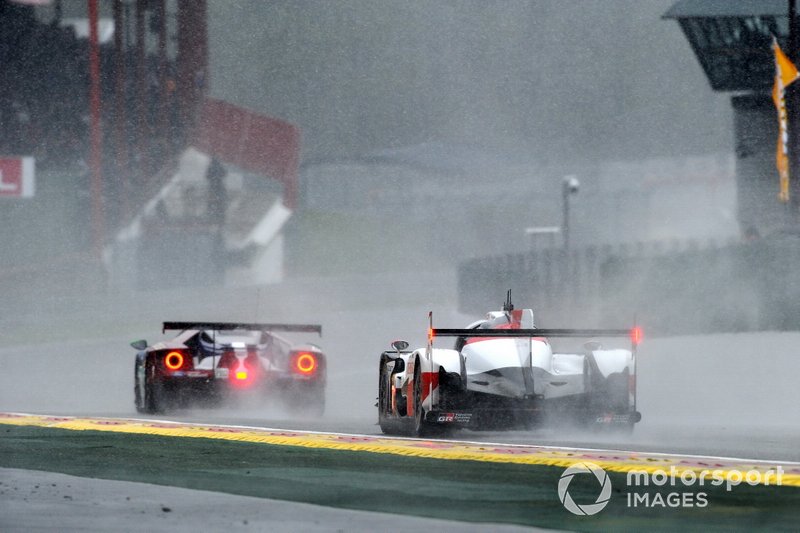 Alonso: I need to improve myself more than Alpine car