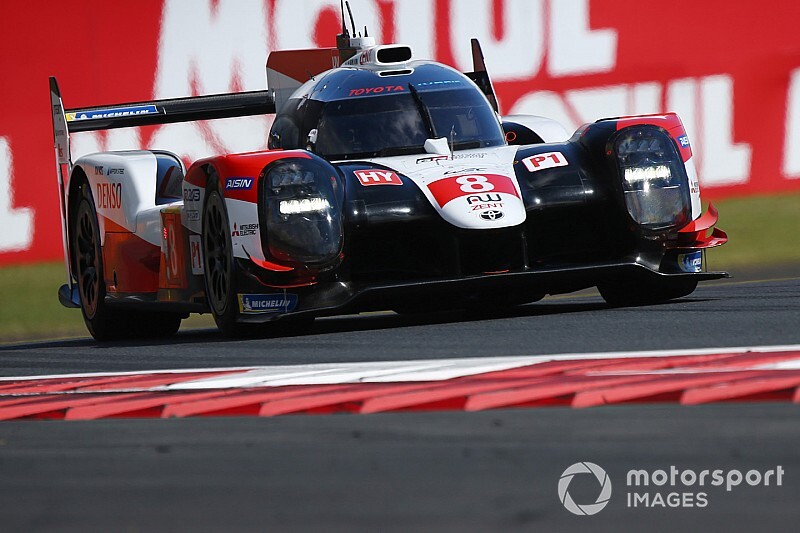 Toyota topped first practice for this weekend's Fuji FIA World Endurance Championship round by just under three tenths of a second ahead of closest LMP1 rival Rebellion.

Sebastien Buemi took the top spot in a 90-minute session that began on a damp but rapidly drying track at the wheel of the #8 TS050 Hybrid.

Toyota was on course to lock out the top two spots for much of the session until Norman Nato set a 1m27.659s in the solo Rebellion R-13-Gibson to split the Japanese cars.

Kamui Kobayashi's best effort of 1m27.790s in the Silverstone-winning #7 Toyota was only enough for third in the end, a little over a tenth slower than Nato.

Toyota's #7 car is carrying the biggest handicap under the new system that is being implemented in LMP1 for the first time this weekend at Fuji, having been slowed by 1.4 seconds a lap compared to the so-called 'reference car', the #6 Ginetta G60-LT-P1.

The #8 Toyota, which finished second in last month's season-opening round, has been slowed by only a second, reflected by the 0.4s gap between the cars in practice.

Ginetta's pair of AER-powered cars propped up the order, with the #5 of Ben Hanley fourth - just over a second off the pace - and the #6 of Charlie Robertson fifth.

Toyota protege Kenta Yamashita put High Class Racing's Oreca 07 on top of the times in LMP2 at his home track with a best time of 1m29.624s.

The SUPER GT points leader was seven tenths ahead of the second-placed Racing Team Nederland Oreca driven by new Formula 2 champion Nyck de Vries, while Nicolas Lapierre put the Cool Racing Oreca third, another half a second back.

Both Cool's Alexander Coigny and JOTA Sport's Anthony Davidson returned to action after being forced to skip the Silverstone opener due to injury.

Miguel Molina was best of the rest in the #71 AF Corse Ferrari 488 GTE, four tenths off the pace, followed by the top Aston Martin Vantage GTE of Nicki Thiim.