Toyota blocked out the top two positions in second practice for this weekend's opening round of the 2019/20 FIA World Endurance Championship season at Silverstone. 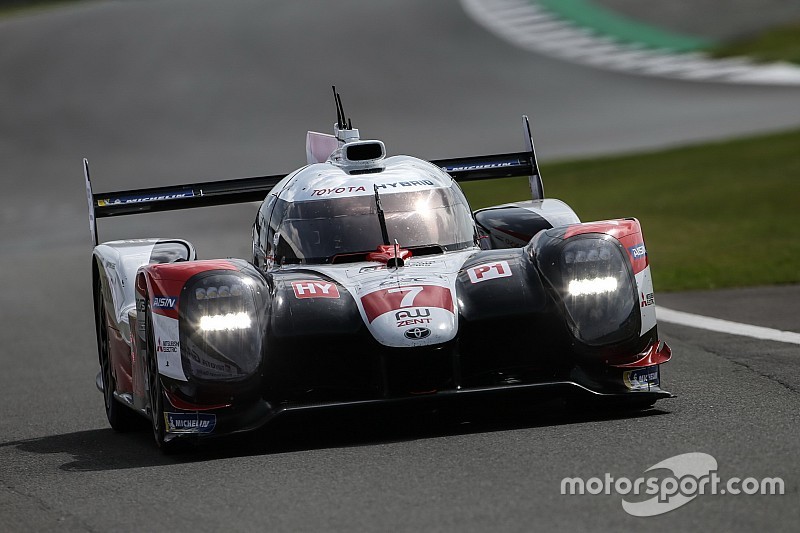 Kamui Kobayashi ended up fastest in the #7 Toyota TS050 Hybrid on a 1m36.847s lap set at the start of the 90-minute afternoon session.

Sebastien Buemi was eight tenths behind in the #8 Toyota with a 1m37.673s best.

Kobayashi's time was eight tenths quicker than the best practice time from the Silverstone WEC round in 2018 and only four tenths slower than the fastest qualifying lap, reflecting the new  Silverstone track surface.

Both Kobayashi and Buemi are understood to have set their times on simulated qualifying runs.

Gustavo Menezes took third with a 1m37.876s in the #1 Rebellion R-13 that topped the times in the morning session with Norman Nato at the wheel.

Loic Duval was fourth fastest in the #3 Rebellion entry on a 1m38.687s, while the #5 works Team LNT Ginetta G60-LT-P1 posted its first representative laptime of the weekend after suffering gear selection issues in the opening session.

Ben Hanley managed a 1m39.600s, which was just under three tenths up on the #6 Ginetta in which Oliver Jarvis posted the time.

Paul di Resta claimed the top spot in LMP2 aboard the United Autosports Oreca 07 on a 1m43.059s.

That was just two hundredths quicker than Kenta Yamashita's 1m43.080s in the High Class Racing Oreca, which was on Goodyear tyres rather than the United car's Michelins.

The Danish High Class squad had to sit out the first 30 minutes of the session for violating WEC rules by testing at Silverstone within 30 days of the race.

The two factory AF Corse Ferraris topped the times in GTE Pro until the closing minutes of the session, when they were split by the best Porsche.

Miguel Molina ended up third on a 1m55.907s in the second Ferrari, while the two Aston Martin Vantage GTEs took fifth and sixth positions in class behind the second factory Porsche.

Ross Gunn headed the GTE Am times in his works Aston Martin.

Da Costa wanted to stay in WEC without BMW