Toyota led Rebellion by less than half a second in the final practice session for the opening round of the 2019/20 FIA World Endurance Championship season at Silverstone. 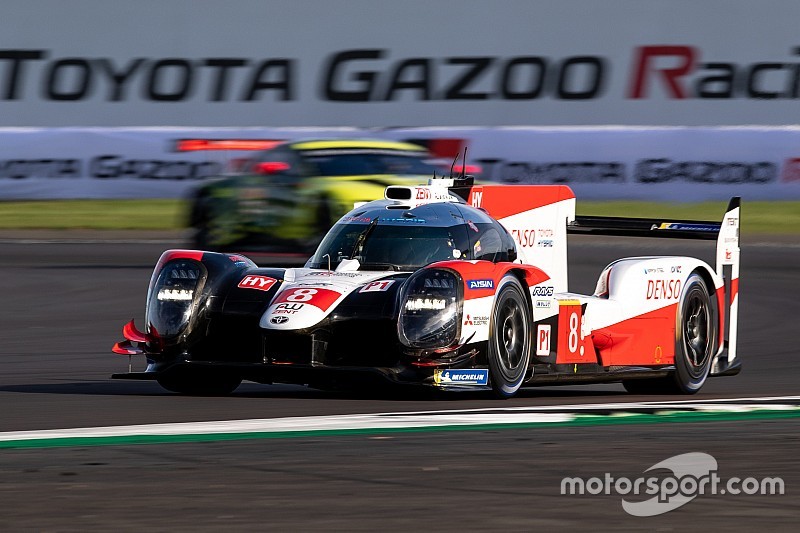 Kazuki Nakajima topped the one-hour Saturday morning session with an early effort of 1m37.014s in the #8 Toyota TS050 Hybrid around the newly-surfaced British venue.

That was just under three tenths slower than stablemate Kamui Kobayashi managed on Friday, but enough to beat the quickest of the Rebellion R-13s, the #3 car of Nathanael Berthon, by 0.398 seconds.

Gustavo Menezes put the #1 Rebellion in third, 0.936s off the pace but fractionally ahead of the #7 Toyota driven by Mike Conway.

Ginetta filled out fifth and sixth places with its pair of G60-LT-P1s, the quickest of which was 1.421s off the pace in the hands of factory driver Charlie Robertson.

There was drama for Robertson however when he spun at Becketts midway through the session due to a rear-right puncture and had to limp back to the pits. The #5 car, which didn't set a timed lap in FP1 due to gear selection issues, did reappear on track later in the session.

LMP2 was topped once again by United Autosports and its new Michelin-shod Oreca, with silver-rated Phil Hanson setting the squad's fastest time of 1m41.271s.

Giedo van der Garde put Racing Team Nederland's Oreca, also running Michelins, in second with a time six tenths off the pace, while Will Stevens set the best time for a Goodyear-shod car in the Jackie Chan DC Racing Oreca in third.

Michael Christensen was third-fastest in the second of the Porsches, while the two Aston Martin Vantage GTEs could manage no better than fifth and sixth.

The sister #57 Porsche stopped out on circuit in the closing stages and had to be wheeled off the track.