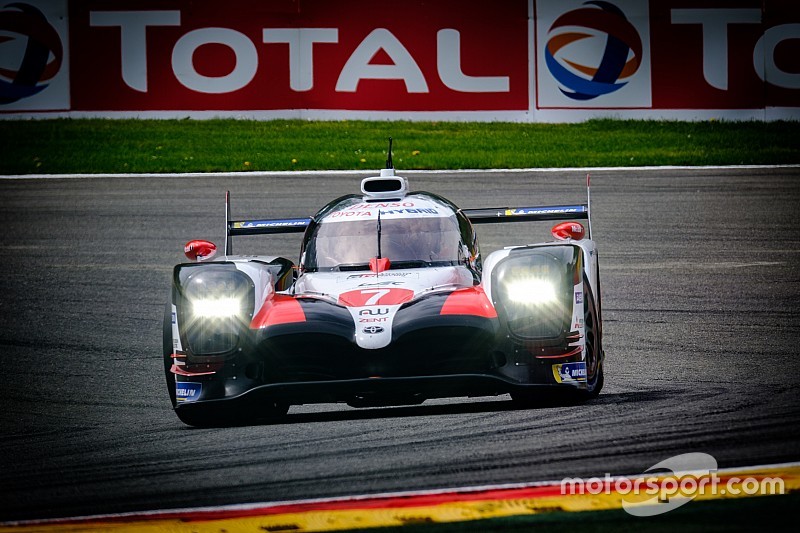 Toyota established a buffer of nearly three seconds over the best of the LMP1 privateers in Friday morning practice for this weekend's Spa FIA World Endurance Championship round.

At the wheel of the #7 Toyota TS050 Hybrid, Kamui Kobayashi pumped in a 1m54.105s with 36 minutes left on the clock, beating last year's quickest qualifying time by three tenths.

Nakajima coasted back to the pits on electrical power only shortly after that, as Toyota simulated running out of fuel.

SMP Racing, which topped Thursday's running, cemented itself as the non-hybrid LMP1 squad to beat by locking out third and fourth positions behind the Toyotas.

Egor Orudzhev recorded the Russian squad's best time in the #17 BR Engineering BR1-AER, which was repaired overnight after Stephane Sarrazin's crash in FP2, a 1m56.842s.

WEC newcomer Stoffel Vandoorne posted the best time in the #11 car, a further six tenths back, ahead of the two Rebellion R-13 Gibsons.

G-Drive Racing was best of the LMP2 runners and seventh overall, thanks to a time of 2m01.143s by Jean-Eric Vergne in the team's Aurus-branded Oreca.

Will Stevens was seventh tenths down in the newly-reliveried #38 Jackie Chan DC Racing Oreca, while Gabriel Aubry was third fastest in the sister #37 car.

The ByKolles LMP1 ended up slower than the entire LMP2 field, as Paolo Ruberti spent the majority of the hour-long session at the wheel of the Gibson-powered ENSO CLM P1/01.

Porsche and Ford locked out the top four positions in GTE Pro between them.

Gianmaria Bruni left it late to set the class benchmark of 2m13.945s in the #91 Porsche 911 RSR, beating Harry Tincknell's best effort in the #67 Ford GT by a little over two tenths.

The points-leading #92 Porsche, driven by Kevin Estre, was third ahead of Olivier Pla's #66 Ford and the two AF Corse Ferrari 488 GTEs.

Aston Martin could only manage seventh and ninth with its pair of Vantage GTEs despite leading the class early on, sandwiching the quicker of the BMW M8 GTEs.