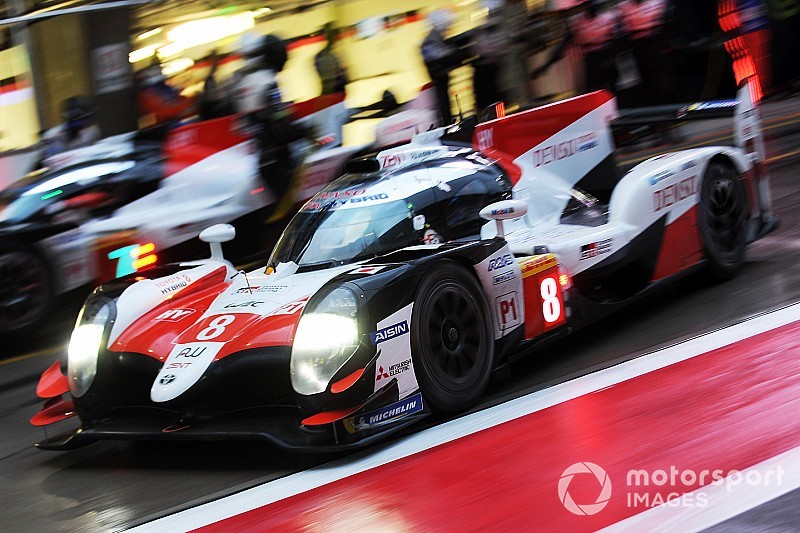 Toyota will get its first experience of Sebring this week ahead of the FIA World Endurance Championship round at the US track next month.

The Japanese manufacturer will run with its two regular TS050 Hybrids over three days, starting on Tuesday.

All six of its drivers, including Fernando Alonso, will be present for the test, which will include night running.

Toyota Motorsport GmbH has booked the track to gain additional experience of the bumpy 3.74-mile airfield venue ahead of the official two-day test the weekend before the Sebring 1000 Miles eight-hour fixture on March 15.

The WEC is returning to Sebring for the first time since the Florida venue's 12-hour fixture kicked off the reborn series in March 2012.

Toyota was never scheduled to contest the race after giving a late go-ahead to its LMP1 hybrid programme and didn't join the WEC until the Le Mans 24 Hours in June after an accident in testing ruled out its one-car entry from the Spa round in May.

TMG technical director Pascal Vasselon said the test would be "interesting", but stressed that he didn't regard it as essential.

"It is not an absolute must because we have done a lot of model-based development and our conclusion is that the bumpiness of Portimao [where the team undertakes much of its winter testing] is in the same league as Sebring," he explained.

"We considered many times to drop this session, but finally we managed to fit it into the budget."

The test has been opened up to other teams and will be attended by the Ganassi Ford GTE Pro squad, DragonSpeed with both its LMP1 and LMP2 contenders and the Jota-run Jackie Chan DC Racing P2 team.

DragonSpeed, which will miss the official test because it will be making its IndyCar debut the same weekend in St Petersburg, is expected to run for only two of the three days.

The new pitlane on the back straight built to accommodate the WEC field on the Sebring double-header weekend is expected to be operational for the test this week.

The WEC race will start at 4pm on Friday, with the traditional Sebring 12 Hours IMSA WeatherTech SportsCar Championship round starting the following morning.