Alonso didn't know what he hit in Dakar crash

Fernando Alonso had no idea what he crashed into during the Dakar's second stage, saying he could not see anything because of the dust.

The two-time Formula 1 world champion lost over two hours after damaging his Toyota Hilux's suspension following an accident some 160km into the stage.

Alonso and co-driver Marc Coma repaired the damage themselves and managed to cross the finish line 2h34m behind teammate and stage winner Giniel de Villiers.

"We collided with something in the dust," said Alonso after the stage. "We don't even know what it was, because we couldn't see anything.

"We had done 48km very fast and we had just caught Erik Van Loon, who was in front of us. Then we had 120km in the dust and with zero visibility until we collided with something."

Alonso and Coma were initially planning to wait for the assistance truck, but were able to repair the damage with help from the team over the radio.

However, Alonso had to drive the final part of the stage without front brakes.

"Initially we planned to wait for assistance, because a truck always comes four or five hours behind," he said. "But calmly we started to disassemble what we could disassemble.

"We had contact with the team and we were informing how the progress was going. And at one point they told us that if we could get this and that out, we could almost repair it. We got a little more serious and that was the case

"We drove without front brakes. We had to cut the front circuit, so we had to drive carefully, but it is one more experience. I wanted to live the Dakar with all the extras and this is part of the race. I'm glad to be here and to continue." 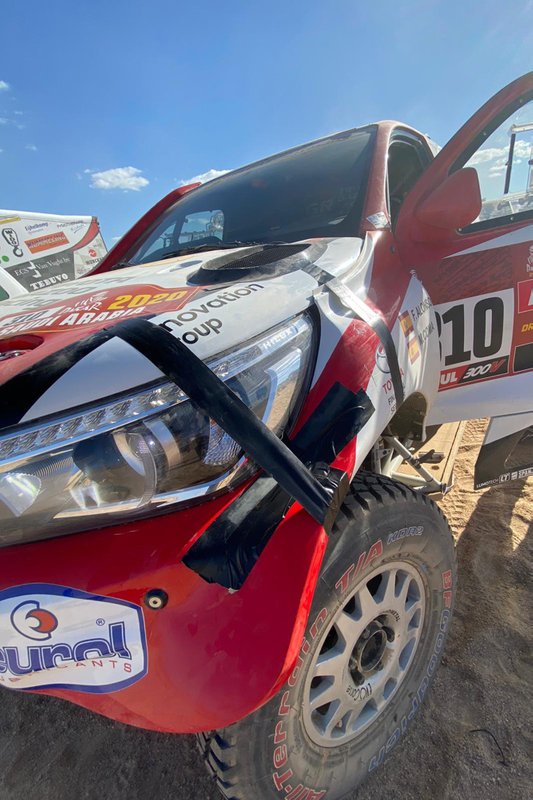 The Spanish driver was still encouraged by the pace displayed during the stage after running close to the leaders' time before his crash.

Alonso is now 48th in the standings, 2h38m behind leader Orlando Terranova.

"It's just as annoying," he said of the accident, comparing it to the shunt that ruled him out of a top finish in October's Morocco Rally.

"I think it was a good day overall, the pace was good, I only did 48km with my pace, but I think we were within the top two or three minimum, and then the navigation was going perfect, we were going just perfect.

"Overall good feelings, happy to continue here because the goal is to finish the Dakar and live the whole experience from start to finish. Surely the result is the negative part of today."

Alonso: US GP protest decision will dictate if F1 is heading in "right direction"