Toyota’s defending champion Nasser Al-Attiyah led the way for most of the 319km timed special on the coastal stage from Jeddah to Al Wajh that kicked off the first ever Saudi Arabia-based Dakar.

But the Qatari suffered three punctures late on, paving the way for an upset.

With the X-raid Mini buggies of past rally winners Stephane Peterhansel and Carlos Sainz Sr having both lost several minutes early on, the privateer Peugeot of Khalid Al Qassimi and Zala’s Mini assumed the leading positions heading into the final stretch of the test.

And though former World Rally Championship regular Al Qassimi suffered a late setback and lost over a quarter of an hour, Zala held firm to clinch the stage win by two minutes over Peterhansel.

The Lithuanian, who is part of the Agrorodeo outfit and has switched to a Mini ALL4 Racing after finishing 12th overall in a Toyota last year, thus became the first driver to win a Dakar stage in a four-wheel-drive Mini since Mikko Hirvonen in 2016.

Sainz made it a Mini 1-2-3 behind Zala and Peterhansel, while Al-Attiyah mitigated the damage from his late-stage travails in fourth place, 5m33s off the pace.

Bernhard ten Brinke was Al-Attiyah’s next best Toyota squadmate, finishing a minute behind in fifth and followed by the other big surprise in the top 10 – Mathieu Serradori in a South African-developed Century CR6 buggy.

Yazeed Al Rajhi began his first home Dakar with eighth place in his Overdrive Toyota, but more or less matched the leaders’ pace after losing time in the early kilometres.

Alonso in 11th was 15 minutes and 27 seconds off the pace set by the leader in his first-ever Dakar stage.

It proved a tougher day for past Dakar winners Giniel de Villiers and Nani Roma, with both the Toyota Gazoo Racing driver - who finished with a slow puncture - and the new Borgward recruit losing more than 20 minutes.

Two-time Le Mans 24 Hours winner Romain Dumas, who had previous outings in a privateer Peugeot, took the start in a DXX buggy developed by his RD Limited team.

But the factory Porsche GT racer dropped out just over 65km into the event as his car caught fire and he was forced to climb out.

The other DXX, campaigned under the Rebellion banner by the LMP1 team’s owner Alexandre Pesci, remains in the race.

Polish rally driver Domzala, a former junior WRC regular, was as many as seven minutes up on Currie at one point in the stage, but ended up just 1m51s clear of the American.

Jose Antonio Hinojo Lopez, defending champion Chaleco Lopez and Sergey Karyakin made up the top five on the day.

Mitch Guthrie was the highest-placed of the Red Bull-backed Overdrive OT3 drivers in 10th place. His champion squadmate Cyril Despres was just 10 minutes off Domzala after 250km, but then dropped another 40 before the finish.

Reinaldo Varela, 2018 class champion, was even worse off as he lost over two hours to Domzala. 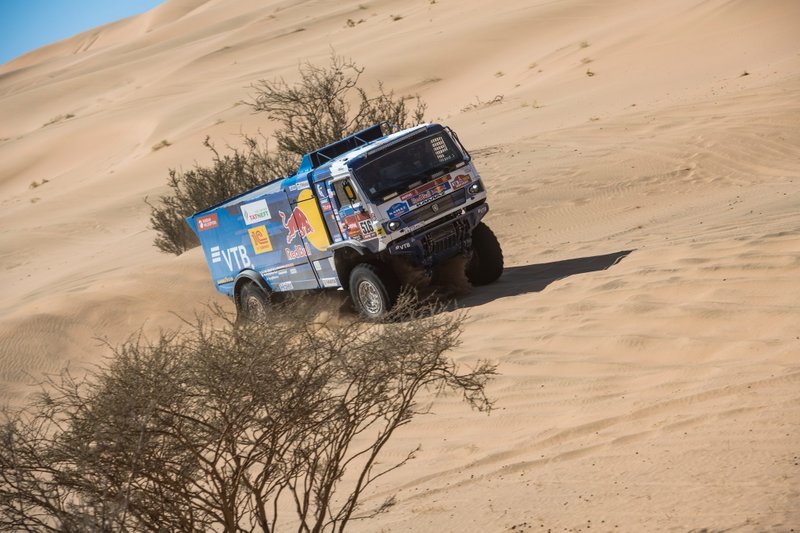 Karginov had led at every waypoint before encountering a setback in the final 100 kilometres, dropping down to seventh place and allowing Shibalov to claim a first stage win in his fourth Dakar.

Maz driver Siarhei Viazovich and new De Rooy Iveco recruit Janus van Kasteren made up the top three, ahead of the second-fastest Kamaz of Dmitry Sotnikov.

Kamaz's defending champion Eduard Nikolaev wound up 10th, but lost only 11 minutes to the leader.

Price's roadbook tore in half during Dakar opener