Team Ford Racing finished in 22nd for it's debut in Dakar.

VALPARAISO, CHILE, 18 January 2014 – Lucio Alvarez and Ronnie Graue finished the Ford Ranger’s Dakar Rally debut in 22nd position after safely completing the short final speed test in Chile today . The Argentine duo celebrated with their entire Team Ford Racing squad in Valparaiso tonight after completing the world’s toughest motorsport event, covering 14 days and more than 9 300 km (including over 5 200 km of special stages) through Argentina and Chile. They completed the final 535 km stage, of which 157 km were competitive on dirt roads, in 11th place. They posted a string of top 10 stage times to battle back up the order after small but time consuming problems early in the event dropped them to 129th, ultimately proving that the Ford had the pace to be competitive. 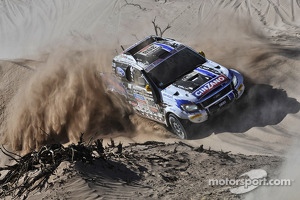 More than half the 147 starters failed to complete this year’s gruelling Dakar Rally, which journeyed north through Argentina before crossing the Andes mountains and heading south along Chile’s coast.

Temperatures of 45°C combined with rock-strewn dirt tracks, heavily rutted dry river beds and soft power-sapping sand dunes placed huge strains on man and machine. But Alvarez’s Ranger proved its strength and reliability by completing the route with nothing more than minor issues.

The car was prepared and run by South Africa’s Neil Woolridge Motorsport while the complex logistics operation was handled by Germany’s South Racing.

Team-mates Chris Visser and Japie Badenhorst retired their similar Ranger in the second stage after a heavy roll.

Lucio Alvarez (308):
“We didn’t have the race I was hoping for, but the important thing is we brought the car to the finish line and we had a good run this week.

“It’s great to reach the podium, and we will take a lot away from this race to develop the car for next year.

“To be more competitive we’ll need to focus on engine performance, but other than that the car is really good.

“The fast but rough stages in Argentina were probably the hardest on the car, and the long 605 km Stage 11 was probably the most difficult with a mix of conditions from rocks to soft sand. We started the stage with 500 litres of fuel, three spare tyres and lots of spare parts so that was pretty tough.

Ronnie Graue (308):
“It has been a tough couple of weeks for us, but I am very happy to reach the podium today. We know that the team has worked really hard, and although we had some issues at the start, everyone worked together to help get the best possible result.

“We had a couple of small navigation problems on some of the stages, but for the rest the route was good. The dunes are where we are able to be most competitive and we did well there.”

Neil Woolridge (Team Manager – Neil Woolridge Motorsport / Ford Racing):
“It’s fantastic to be here at the finish, and if someone said at the start of the Dakar that we would definitely make it to the end I would have taken it with both hands.

“With retrospect, without a doubt I know we could have done better. Our first priority was to finish, secondly to get into the top 10 and even to get into the top five would be like winning. Apart from the problems we had on the first couple of days, the results have shown that this was attainable.

“Aside from an issue with the wheels and the engine management problems with the throttle body and VCT, the Ranger has been fantastic and has performed really well. To achieve that first time out for a brand new project is superb and we can give ourselves a pat on the back.

“I am very proud of the team. A week and a half ago the guys were down and out, but everyone pulled together and worked as a team to get us to the end.

“The big highlight for me was the car crossing the finish line on that long 605 km stage from Antofagasta to El Salvador. Everyone was slightly nervous about it, but the guys brought the car home in a brilliant 8th place and that was a great achievement.”

Scott Abraham (Team Manager – South Racing):
“It has been an incredibly tough two weeks with lots of highs and lows. For me one of the major highs was the way the team came together and fought back after the difficult first week. This showed a lot of character and depth.

“A big thanks goes to all the mechanics and the entire team that kept the Ranger running throughout the race. The last three days in particular have been very encouraging as Lucio and Ronnie have been running consistently in the top 10.

“Other than the minor issues we encountered in the first couple of days in Argentina, the car has performed well and the team has enjoyed a clean run. Undoubtedly we were hampered by the low starting positions which meant they got stuck behind the big trucks in all the dust.

“But ultimately the team has proved the performance of the Ranger, and especially in the dunes Lucio and Ronnie were regularly in the top five at the various checkpoints. This gives us the motivation to continue fighting for the future, and certainly the vehicle and the team are capable of doing it.

“As part of the learning phase we have high expectations, but I think we’ve done Ford and the Ranger proud. The team brought the car home, and proved that it’s Built Ford Tough.

“We will take a lot away from this experience and continue developing the vehicle so that we can come back next year much stronger.”