Alesi calls for penalties for speeding on asphalt run-offs 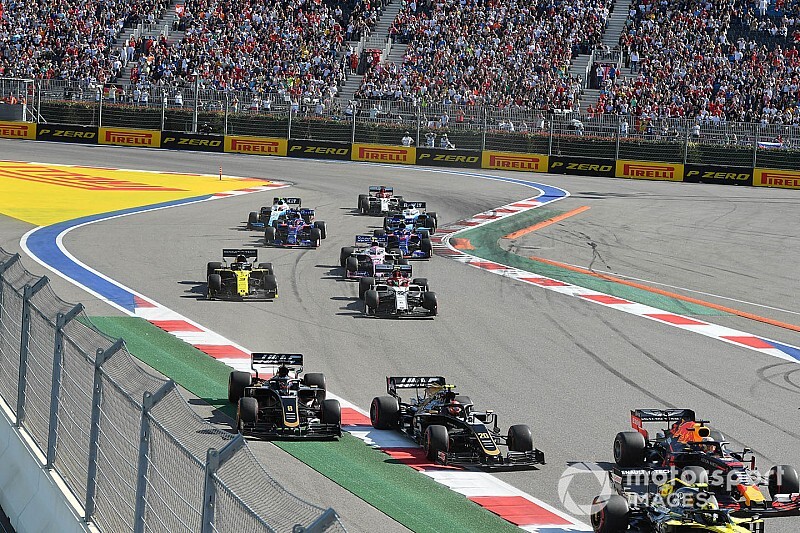 In the F2 sprint race at Sochi, Jack Aitken and Nikita Mazepin collided while travelling across the run-off area at Turn 2 on the first lap, triggering major contact with the barriers for Nobuharu Matsushita.

Mazepin was deemed to be at fault by the stewards, and subsequently received a 15-place grid penalty for the next race in Abu Dhabi.

The incident came just a few weeks after the F2 accident at Spa that cost the life of Anthoine Hubert, and left Juan Manuel Correa with serious injuries.

The pair collided in the run-off area at the top of Raidillon as following drivers tried to avoid Alesi's son Giuliano, who was moving slowly after spinning and clipping the barrier.

"This is the only thing I can say. I hate the people who blame when the things are done, so I don't want to blame anybody. But we had a warning, and now we have to react about that.

"At the moment the evolution of safety from the FIA and the circuits was to have asphalt, where normally we had gravel traps. Now we have it, we have to adapt the situation to what has been done.

"When you are out of the track, maybe you lose two or three positions, but never ever will you have a situation like we had in Sochi.

Asked if it was realistic for the FIA to police speeding in run-off areas, he said: "The speed limit in the pitlane is 80km/h. You do 82, you're penalised. I tell you, the performance of these cars is huge on braking. They will probably overreact and really stop the car and go 80% slower, instead of 50."

Alesi said stiff penalties are the only way to tackle the issue.

"It has been explained to each driver, and as usual what happens when you explain, it doesn't work like that. So you need to be extremely hard. Which means if it's in practice, it should be like you are not stopping at the scale.

"If it happens during the race, sometimes we see a five-second penalty – no, it should be a drive through."

Alesi said he wasn't just singling out F2: "It's everywhere, in each category. Especially for safety, you need to have a strict regulation.

"Plus at the moment from what I drove and what I see now, the evolution of safety on the cars is massive. I drove the F2 car in Monza. When it's like that, you sit in the car, and you feel that nothing can happen. Because you are in this mood, we should have rules.

"Now there is an economic balance for a circuit. F1 is one thing, then you have MotoGP, you have GTs, each category has its own problems. You can't always say to the circuit, 'Do the track for F1.' They need to have flexibility to prepare the circuit for all these categories.

"We cannot change the track all the time – we should ask the series to adapt the speed, in case of missing the racing line."

Alesi added that the FIA should also avoid situations like that seen at the German GP, where the run-off area at the final corner became particularly slippery in wet conditions.

"What we have seen in Hockenheim is not acceptable. It was a run-off area with asphalt, but it's used during the season to make the drag starts, so it was full of oil or whatever, and it looks like ice.

"They lost two or three cars there. For me that is not acceptable. You do that, you have to make it like in Paul Ricard, with a special asphalt, where actually there is more grip outside than inside."