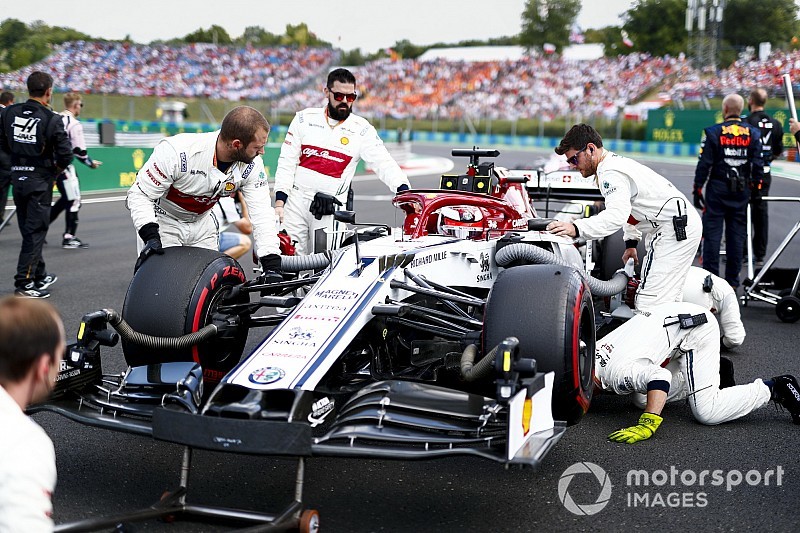 Alfa Romeo is “improving drastically” and has made a “huge” step with its potential this season, according to the Formula 1 team’s chief Frederic Vasseur.

The team formerly known as Sauber ended 2018 fighting regularly for top-10 finishes, but had a small slip in performance at the start of this year.

New signing Kimi Raikkonen has led the team’s progress to the head of the midfield battle again, and Alfa only trailed McLaren in the races leading into F1’s summer break.

Vasseur told Motorsport.com he was splitting the championship standings – in which Alfa lies seventh – from where he believes his team really is in the pecking order.

“I’m much more focused on the level of performance,” Vasseur told Motorsport.com. “We are improving drastically. Last year we were 2.5s off, we are on average 1.5 and the [most recent races] we were 1.2.

“For us it’s huge. Then we have to translate it in points, and that’s another story. At least in terms of potential, we made a huge step forward.”

Investment from new ownership and the new-for-2019 Alfa rebranding have transformed the team’s prospects since it was propping up the order in 2017.

Vasseur, who joined as team principal and CEO halfway through ‘17, thinks one key area to improve will be how it prepares for the start of 2020.

“We did a small step back between last year and the beginning of the season,” he said.

“Perhaps not [right at] the beginning but we had a part of the season, maybe May, that made it more difficult.

“I think it’s the life of the development. Sometimes you are flat [in terms of performance] for one month, one day you have a big step forward.

“You need to have to look at the global picture. You can’t point out one race compared to last year.

“Overall we’ve made a progress of 1-1.5%, and this is huge. The next step for us is probably to be a bit more ready at race one, for next season.”

Alfa is in a tightly-contested fight for fifth in the constructors’ championship, as McLaren’s consistent point-scoring has given it a healthy advantage in fourth.

However, Alfa (32 points) is in a gaggle of teams chasing Toro Rosso (43 points) for fifth, with the Red Bull junior team ahead by virtue of a massive haul in the chaotic rain-hit German Grand Prix, where its drivers finished third and sixth.

“Some tracks we are in a better shape than some others, you look at the trend, the trend is going down and is more [indicative],” said Vasseur.

“We have to continue in this direction. I know perfectly at one stage it [the trend of improvement] will go flat.

“In quali and the race over the last two or three events we came back more or less around Renault and McLaren, sometimes in front, sometimes just behind. We have to fight with them.”