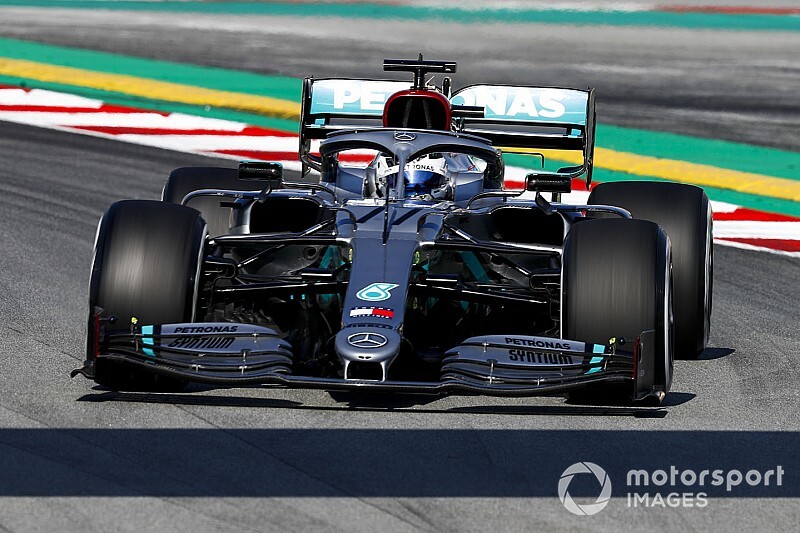 On a fine and sunny day at the Barcelona track, Bottas – who will hand over the W11 to Lewis Hamilton for this afternoon's running – set the best time of 1m17.313s on the C3 Pirelli rubber, the middle compound in the manufacturer's range for testing, as he completed 79 laps.

Bottas had put Mercedes at the top of the times shortly after Williams driver George Russell had led the field out of the pits at 8am local time.

Sainz spent most of the opening hour slowing lowering the benchmark time on the C3 tyres, before going quicker again shortly after one hour had been completed on the C2s.

Bottas and Perez exchanged the top spot as they both ran the C2 rubber after that, before Bottas put in the morning's best time around 15 minutes before start of the final hour.

Perez ended up 0.062s adrift for Racing Point, as Red Bull's Max Verstappen, who completed the most laps of any driver on the first morning with 91, was third quickest.

Sainz finished the morning in fourth place, just ahead of Renault's Esteban Ocon.

Russell spent the early running going out and then taking to the pitlane, so one hour and 45 minutes had passed before he set a laptime.

But the British driver worked his way up the times thereafter to end the morning in sixth place on a 1m18.168s.

Charles Leclerc took over driving duties for Ferrari ahead of the action getting underway, as Sebastian Vettel – who had been scheduled to drive – felt unwell and the Scuderia opted to make a change.

Leclerc set the seventh fastest time on a 1m18.289s and completed 64 laps.

Robert Kubica finished eighth for Alfa Romeo after completing his half-day of running for the team in the first test as part of his role as the squad's reserve driver.

His best lap of 1m18.386s was 1.073s adrift of Bottas's best, and Kubica will hand over the C39 to Antonio Giovinazzi for Wednesday afternoon's running.

Kevin Magnussen was ninth for Haas, with Daniil Kvyat rounding out the field for AlphaTauri.

Kvyat's best time was 1.171s slower than Bottas, which closed up the gap covering the whole field in the session's final moments significantly.

The Russian driver had looked set to go even faster with his final lap, but he aborted the run at the last moment.