Ferrari made a commanding start to the second day of 2019 Formula 1 testing at Barcelona, with Charles Leclerc nearly a full second clear of the field. 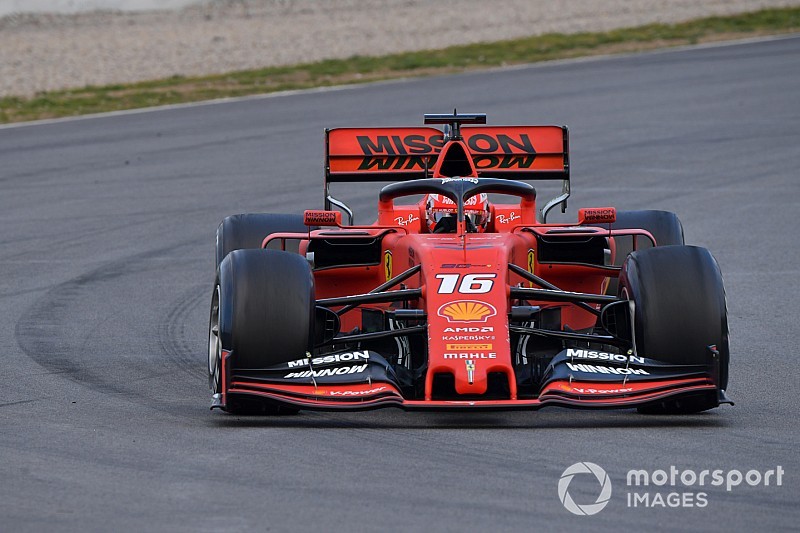 Leclerc picked up where teammate Sebastian Vettel left off on day one, moving to the top of the order just after the first hour was up on a cool morning in Spain.

From there, he gradually improved his times, eventually setting a 1m18.247s on the yellow-marked C3 tyres just before 11.30 local time.

Ferrari's new signing went back out on the same tyre compound several times again before lunch, narrowly missing out on beating his own time on each run.

Haas and Alfa Romeo made it a one-two-three for the Ferrari-powered teams, with Kevin Magnussen putting in the second fastest time just before lunch.

Haas made a slow start to the day, spending much of the opening two hours in the garage, but Magnussen was particularly busy in the final hour of the session, bringing his lap count up to 33.

Antonio Giovinazzi had led the early running before Leclerc took control at the top of the times, and his best lap on the softer C4 tyres was eventually good enough for third.

Lando Norris put McLaren fourth, going faster on the C2 tyres than he managed on the C3s earlier in the morning, while Pierre Gasly moved Red Bull up from the bottom of the order to fifth with a quicker run in the final 30 minutes before lunch with the C3 tyres.

Daniel Ricciardo made a positive start to the day for Renault, which brought up the rear on the timing sheets on day one, as his early runs were good enough to run second to Leclerc.

However, his morning progress was undone when the top flap of his rear wing fell off on the main straight, sending him into a spin at Turn 1.

Ricciardo – who fell to sixth by lunchtime – made it back to the pits slowly while Renault team members retrieved the pieces of the wing from trackside and returned them to the garage. The Aussie reappeared on track shortly before the lunch break.

Lewis Hamilton completed another busy but low-key session of running for Mercedes in seventh, ahead of Toro Rosso rookie Alexander Albon, who spun twice on his first proper day of driving an F1 car.

Albon spun on his out-lap just after the circuit opened at 9am, getting stuck in the gravel between Turns 4 and 5 and causing a red flag, and when he rejoined the action he completed his next few runs on the soft C4 compound of tyres.

He recovered to log 61 laps, but did suffer another low-speed spin at the final chicane, moments after setting what was then his best middle sector time.

New Racing Point signing Lance Stroll was the slowest of the drivers in action, completing 45 laps.