Formula 1's ultra-tight midfield pack has closed up even more this year, reckon leading paddock figures, with a host of teams having impressed in testing so far. 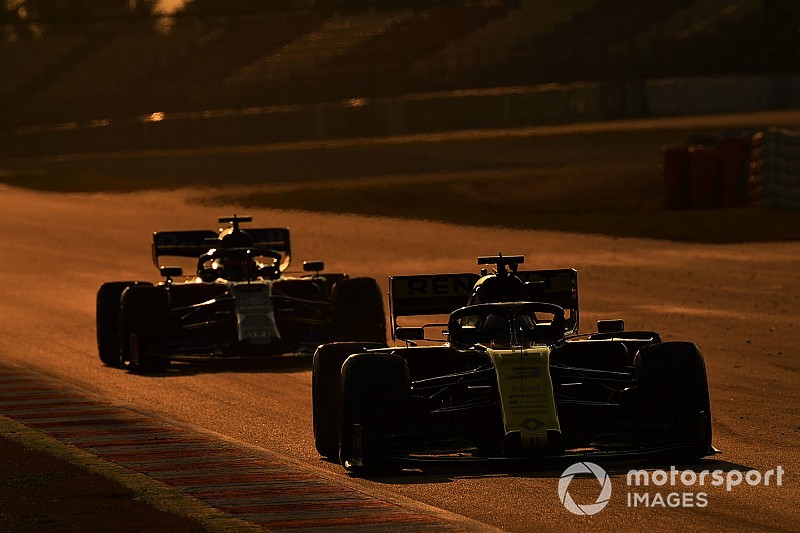 While few doubt that Ferrari is currently the team to beat after its strong first week of testing, behind the Italian team things are much harder to work out.

Daniel Ricciardo, whose teammate Nico Hulkenberg set the fastest time of the first week of testing, says that everyone is impressing at the moment.

"I kind of feel that everyone has a pretty decent car at the moment," he said.

Pirelli's F1 racing manager Mario Isola said that the first impressions from last week were that the pack had closed up.

"More than only the top three teams seem to be quite close," he said. "Now, we have to understand if they are hiding something or not, but looking at the lap times it seems quite close."

Mercedes boss Toto Wolff said that as well as things looking tight at the front, he said F1 midfield teams had the potential to surprise this year based on some strong lap times from the first week.

When asked who he expected Ferrari's main competitor to be, Wolff said: "I see everybody. There could be Red Bull for sure. It has the resource to be competitive, and it has always been a flexible team to adapt to new regulations, and even change directions.

World champion Lewis Hamilton even reckoned that the clear advantage the top three teams had had over the rest of the pack was no longer guaranteed.

Asked about who he thought would be battling for the championship, he said: "I think at the moment you can't rule out anybody. There are at least six drivers at the moment that can have the potential performance wise to fight. We just have to watch the development.

"At the moment when we do testing I don't look at what anyone else is doing, I just look at my data and my understanding of what is happening with the car and the tyres, and that is all we can do.

"At the moment everyone is doing a different programme but I hope it is at least us three teams – and maybe Renault can come along, who knows?"

Who's driving when in F1's second pre-season test