David Coulthard’s victory in the 1999 British Grand Prix had rather fallen his way, helped by McLaren teammate Mika Hakkinen’s retirement when a wheel flew off and Michael Schumacher’s brutal exit at Stowe that broke his leg. Twelve months later at Silverstone, DC would win again – this time, without any gifts from rivals.

For scheduling reasons seemingly known only to Bernie Ecclestone, the event was shifted forward into April and the fickle British springtime weather played its part, as you’d expect. So much rain had fallen that car parks became quagmires and, to much outcry, many spectators were turned away from qualifying to protect the grassland parking for raceday.

Ferrari had been on a roll in the previous three races, with Michael Schumacher winning all the races so far, while McLaren struggled for reliability – with neither car scoring in Australia nor Brazil due to Mercedes engine problems. 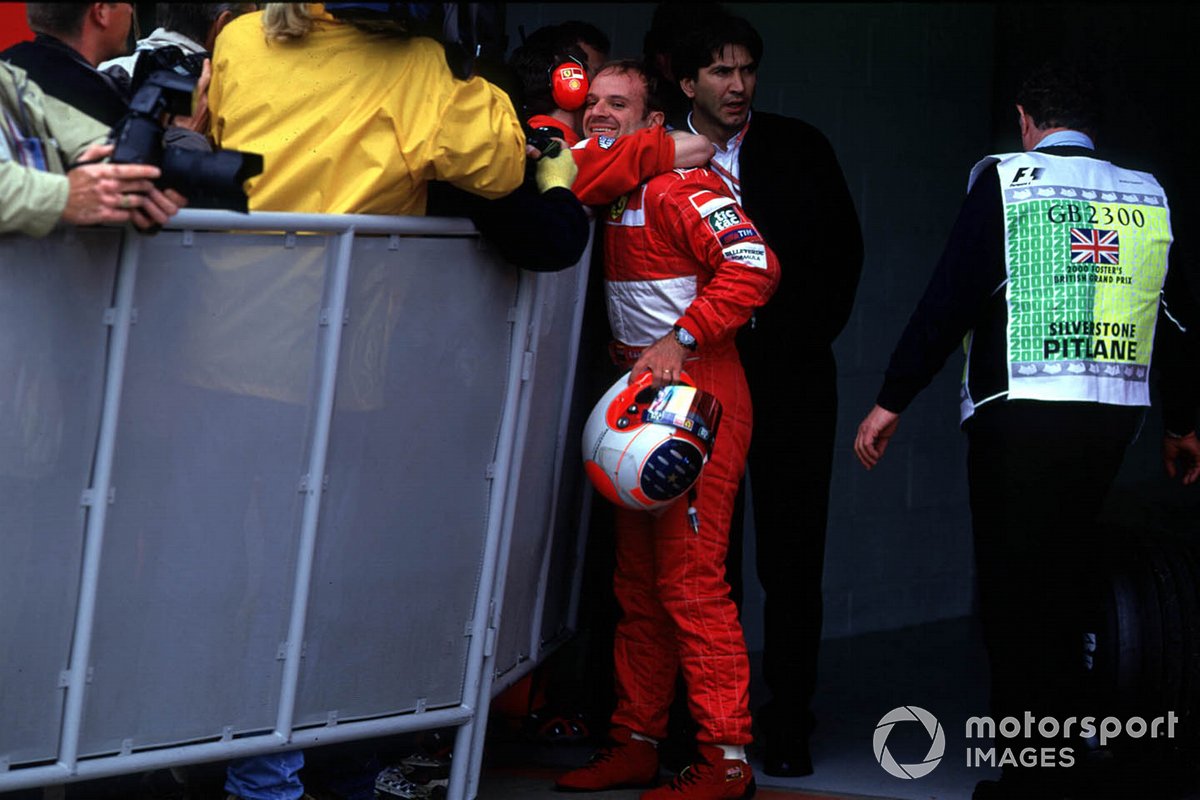 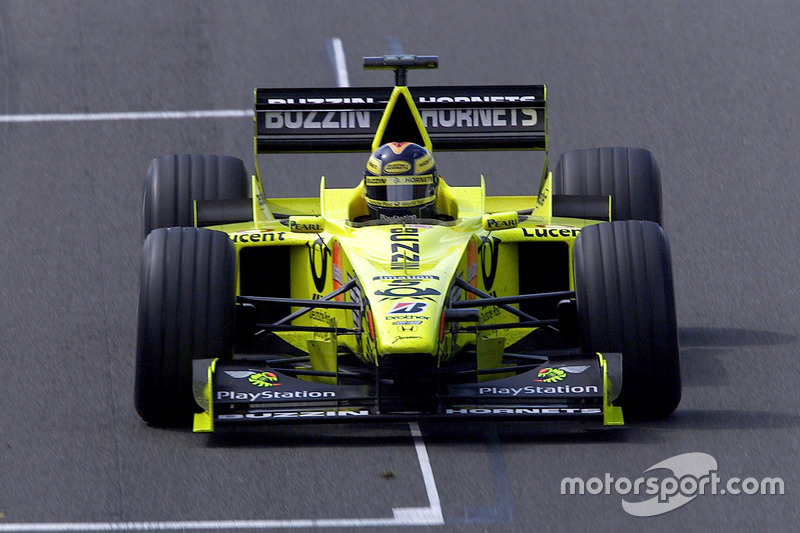 In a dramatic damp-but-drying qualifying session, Rubens Barrichello took his first pole for Ferrari, the third of his career with three different teams, just 0.003s ahead of Heinz-Harald Frentzen’s Jordan. Hakkinen was 0.038s further back, blaming yellow flags from Jarno Trulli’s spin for costing him pole, while Coulthard was almost half a second off the pace. He cited a Jordan and a Williams for hampering his fastest lap.

“With the circuit getting drier all the time it will always come down to where you are on the track on the last lap," he commented. "It’s just impossible to guess what traffic will be like.”

Schumacher qualified fifth, complaining: “We had changed the set-up, but it did not pay off. On top of that, I made a couple of small mistakes which cost me precious time.” 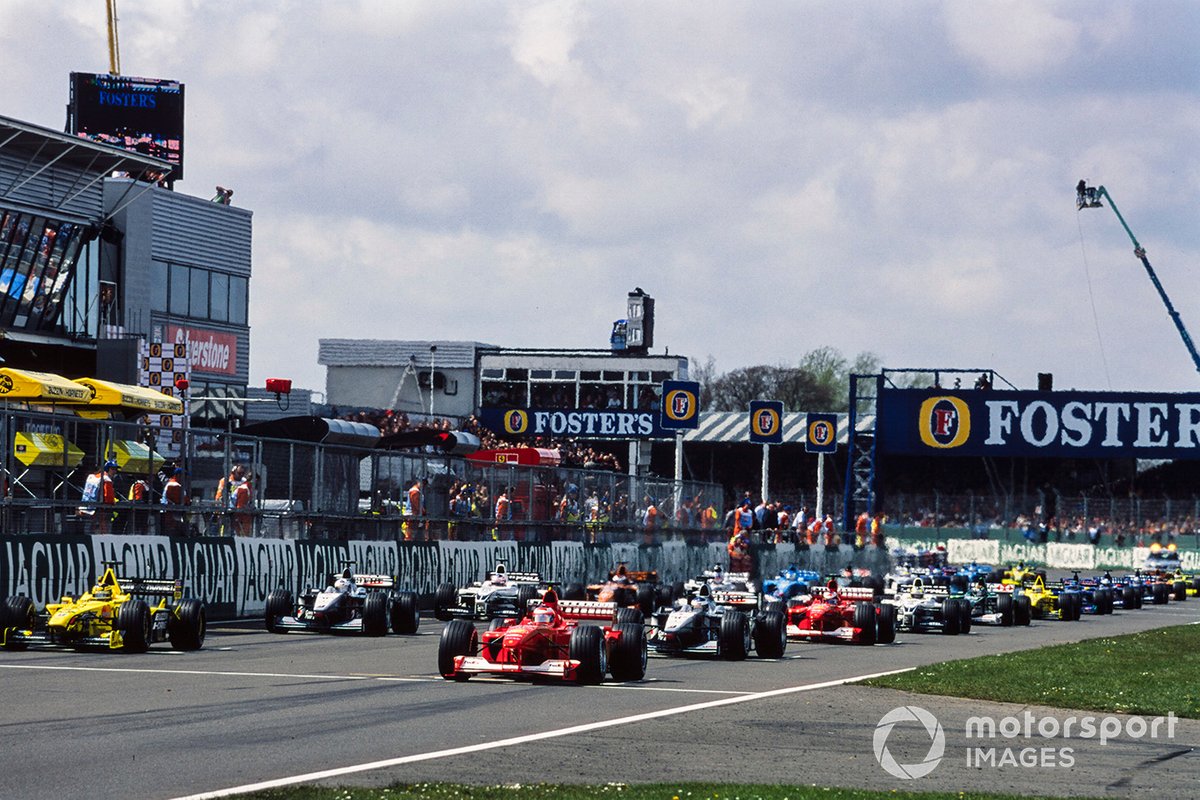 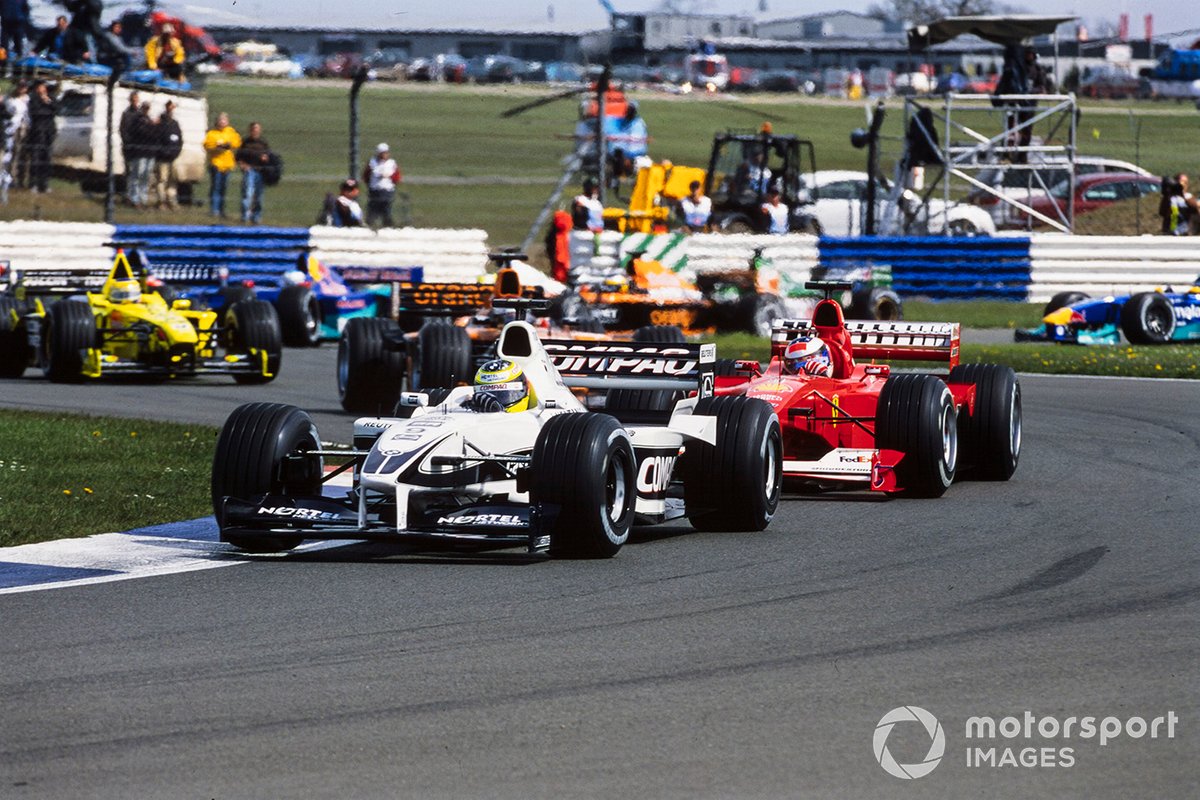 At the start, Barrichello jumped into the lead ahead of Frentzen, while Coulthard got past a slow-starting Hakkinen to run third, with rookie Jenson Button running a strong fifth for Williams-BMW after Schumacher got pushed on to the grass by Hakkinen on the run to Copse. Michael then became embroiled in a fierce early scrap with the other Williams of brother Ralf, dropping back to seventh.

The leaders stayed tightly packed, with the top five covered by less than 3s by one-third distance before the pitstop sequence began. 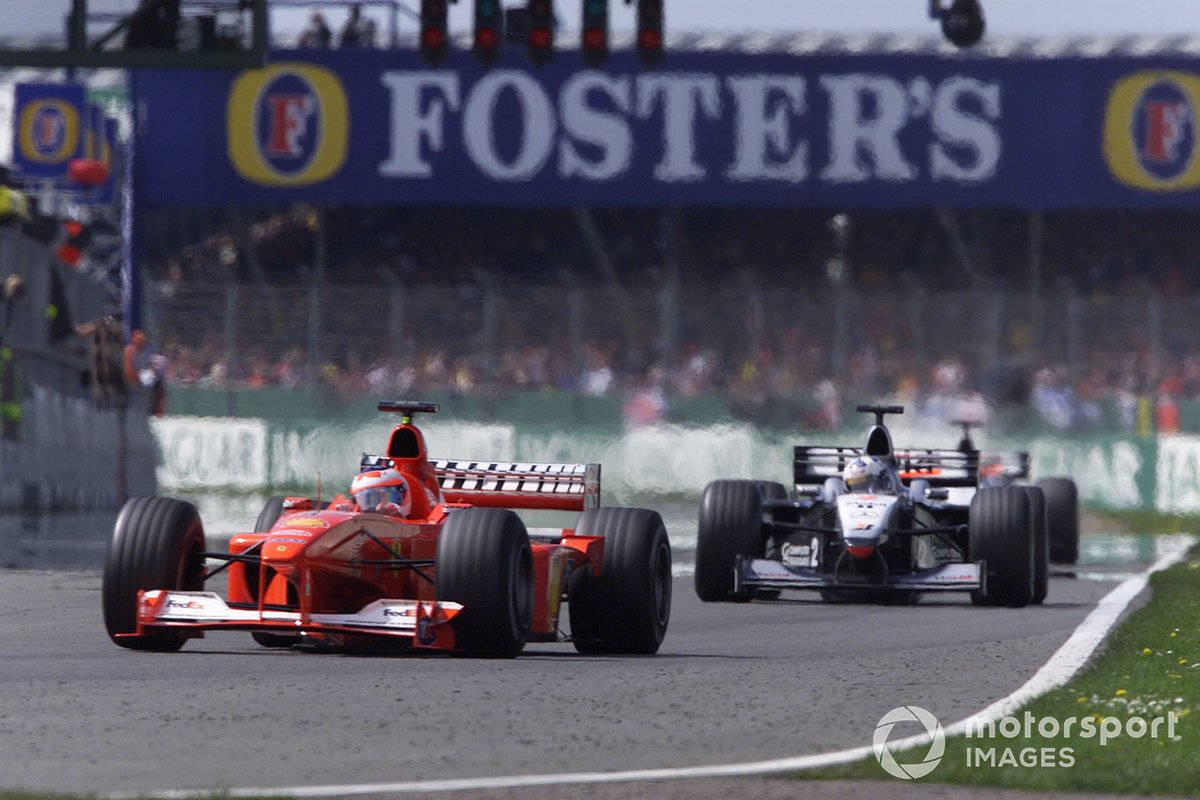 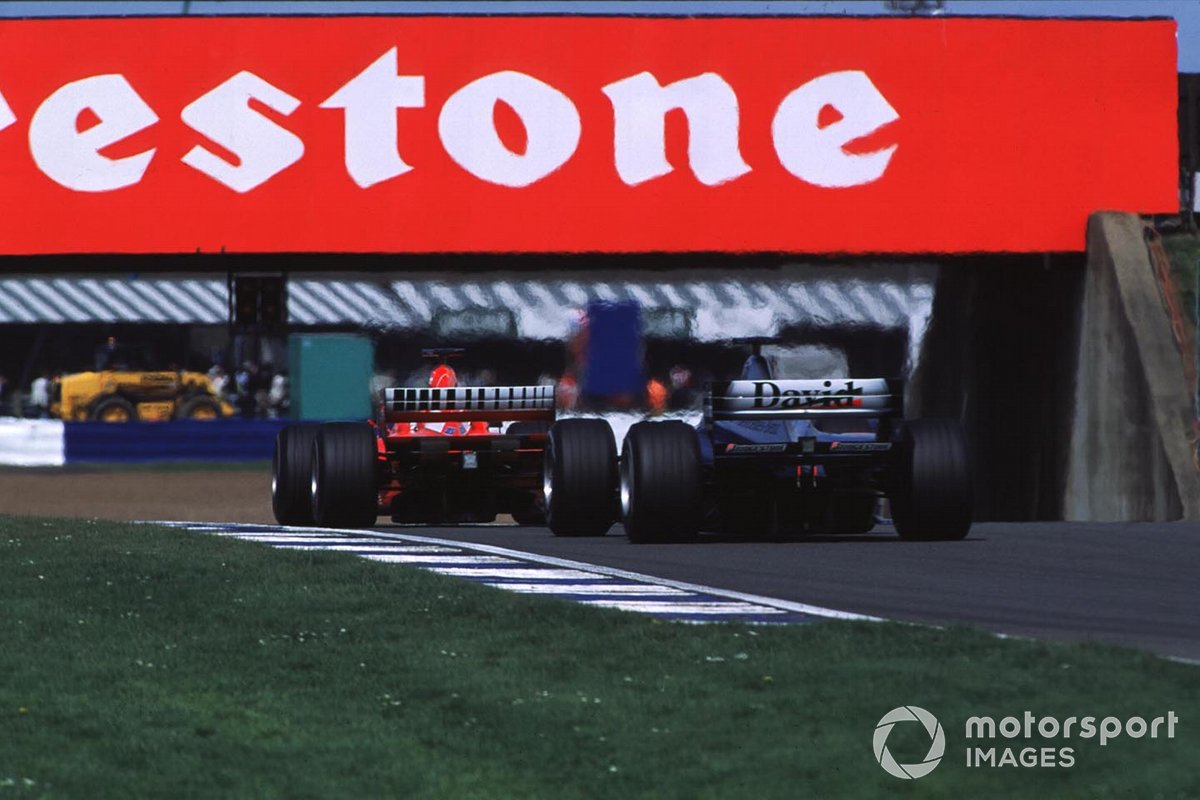 Before that happened, and completely missed by the live TV cameras, Coulthard pulled off a stunning move on Barrichello, driving around the outside of him at Stowe after getting a strong tow on the Hangar Straight, first moving to the right before swooping to Barrichello’s left to do so.

He recalled: “I thought I was going to be stuck behind Rubens until the stop, but then he made a small mistake coming out of the last part of Becketts. I got it right and got a run on him. I remembered Nigel Mansell’s move on [Nelson] Piquet a few years ago [1987], and thought ‘I’ll give that a go’ and it held together. That gave me the advantage for the pitstop.”

Coulthard then unleased some scintillating fastest laps to ensure his advantage, as Barrichello immediately pitted, going for a two-stop strategy. Both he and Frentzen were back in front when Coulthard made for his one stop a few laps later, but Barrichello spun at Luffield on lap 35, splashing through the wet grass on the infield as he rejoined, and then heading straight to the pits to retire. 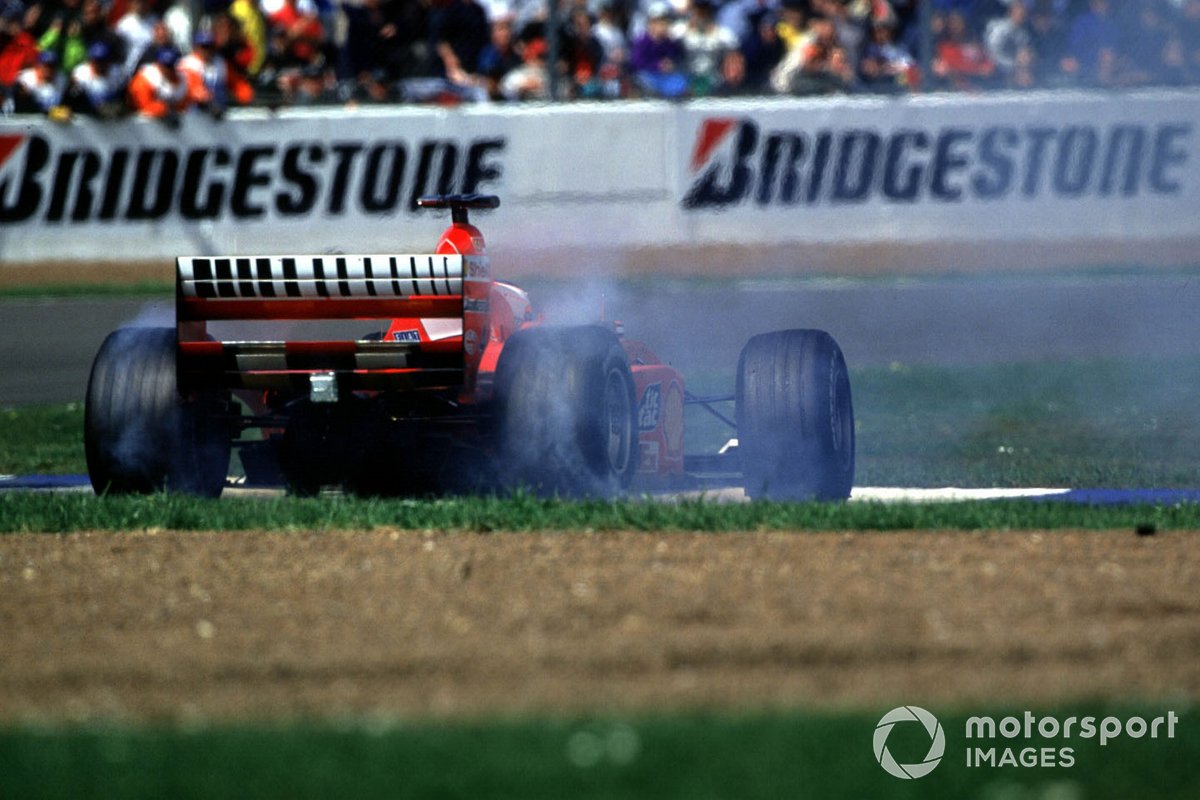 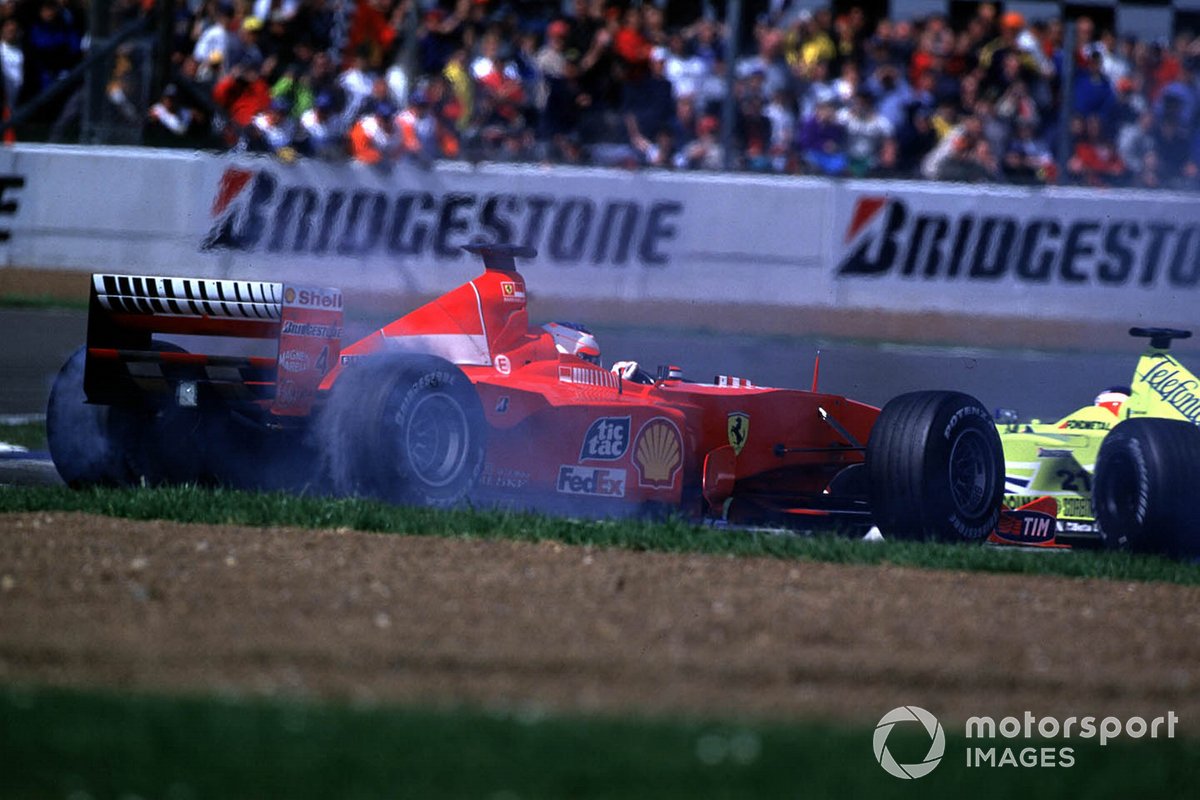 “I am very sad, because I had the opportunity of taking my first grand prix win,” said Barrichello. “Around five or six laps before I retired, I started to feel there was something wrong with the car. Then I began to have problems with the clutch and the throttle. That is why Coulthard managed to pass me.

“I spun because of the erratic behaviour of the engine, which almost died on the entry into the corner, before the power suddenly came in again. I decided to pit, but there was nothing to be done. It was a problem with the high-pressure hydraulic circuit.” 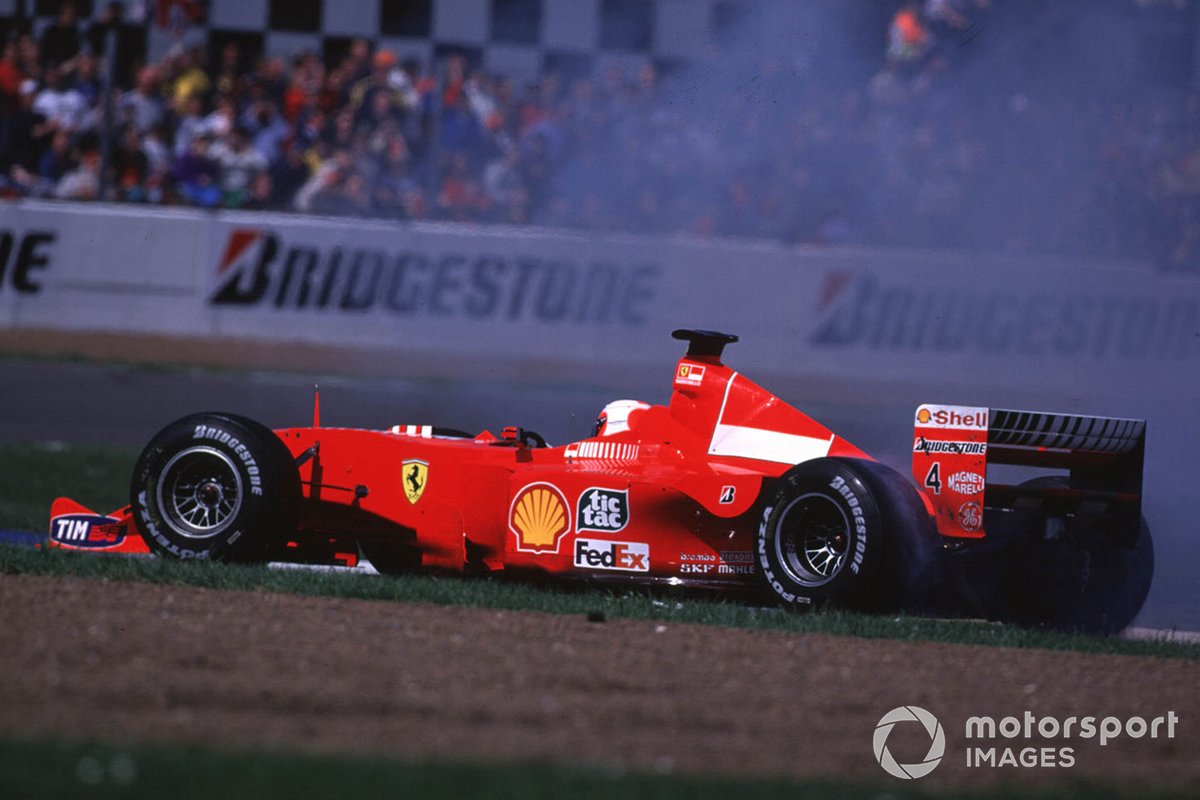 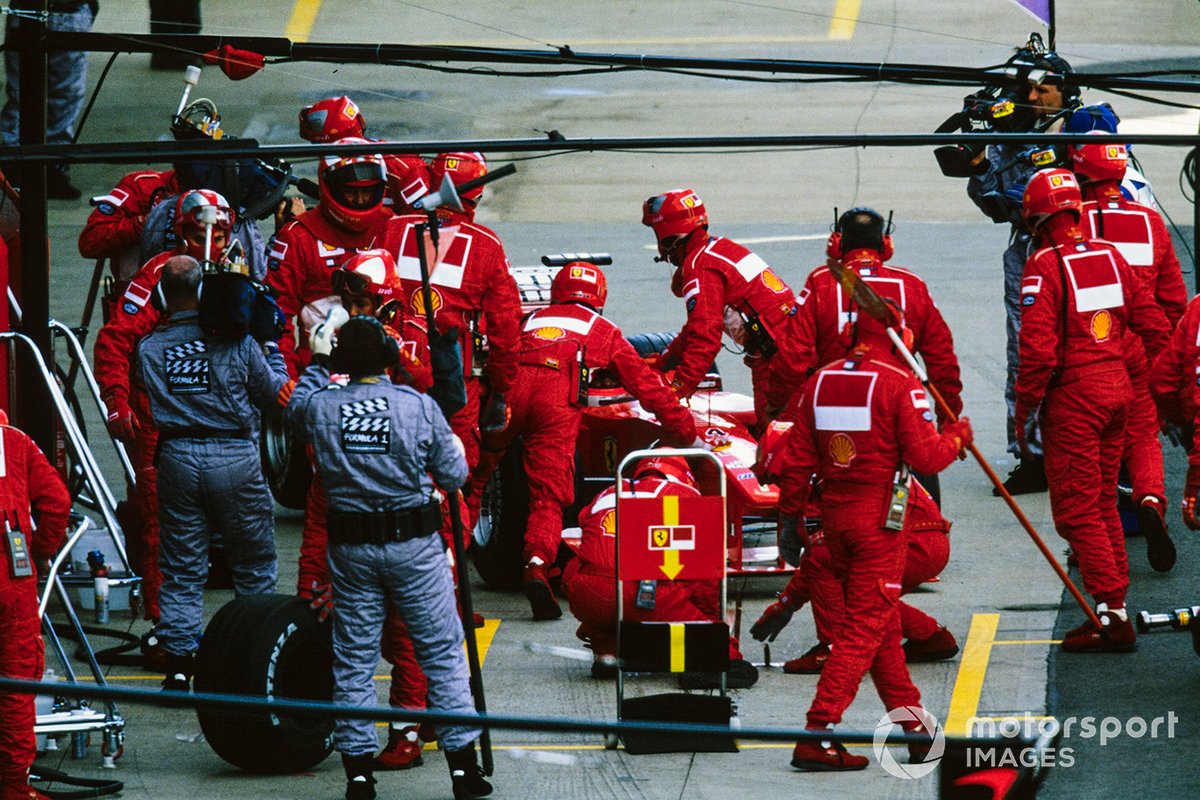 Rubens Barrichello, Ferrari F1-2000, returned to the garage and retired from the race

Leader Frentzen then made his second stop, but a promising points day turned to nothing when his car became stuck in sixth gear during the final stint.

“We were competitive all weekend, so it is frustrating to come away without points,” rued the German, who had taken Jordan to third in the previous year's championship. “We should have finished in the top four as our decision to drive an aggressive race by making two stops was working well to keep us up with McLaren and Ferrari. At least we know we can lead races.”

That left the two McLarens out front, but Coulthard’s drive to his seventh career victory wasn’t without problems as he too hit gearbox trouble with 15 laps to go.

“I had so much time to think about it and I developed a small gearbox problem, and then I was preparing to cry in the car! It meant that I wasn’t able to take things easy, but thankfully it held together.” 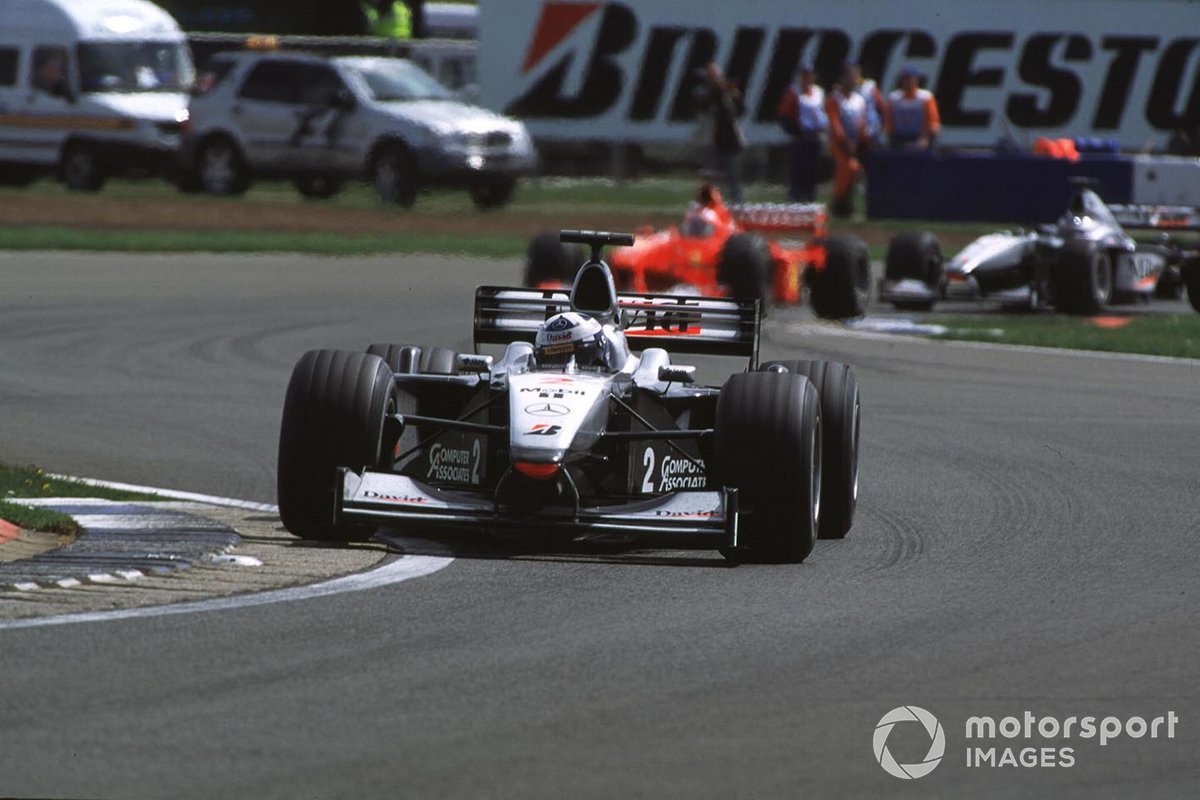 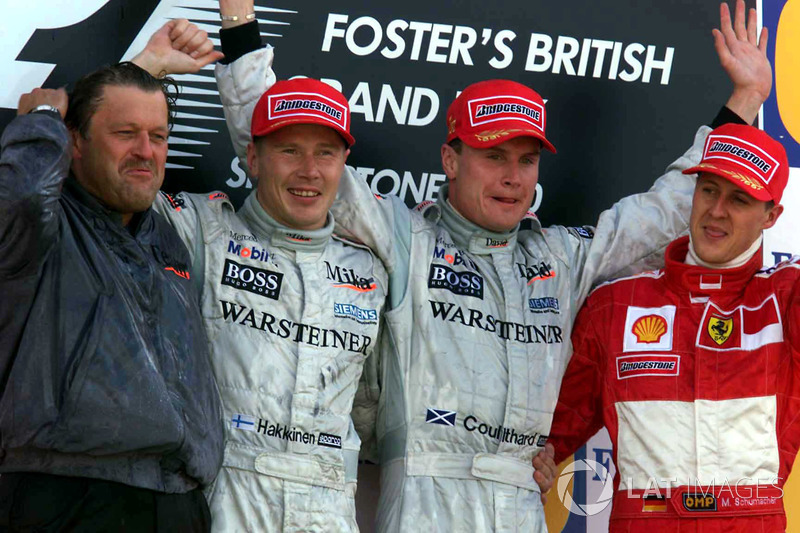 Hakkinen finished 1.477s behind, and said: “I was not happy with the balance of the car in the race. We made a minor change in my pitstop and I was able to go quicker but we needed more than that. The car did improve towards the end when there was a lot more grip on the track surface and I was clear of traffic so I was able to close the gap to David.”

Michael Schumacher recovered to finish third, almost 20s in arrears, while his brother and Button completed the top five. Jarno Trulli scored Jordan's consolation prize with a point for sixth.