The Monaco Grand Prix was a special place for three-time world champion Jack Brabham. The Australian scored his first Formula 1 world championship race victory on the legendary streets in 1959 and famously came within one corner of winning the 1970 event at the age 44.

And on his first GP there in 1957, he put in a superb performance that grabbed attention and helped set him on his way to the top of the sport - in association with Avon Tyres.

It was his first full season as an F1 driver with Cooper, but the British team didn’t yet have a car to maximise the 2.5-litre engine regulations. Instead, Brabham had the T43, which was run as both an F1 and F2 car, with a two-litre version of the Climax FPF powerplant.

But, running Avon tyres in place of his usual rubber, Brabham took advantage of the agile Cooper and a dramatic race to nearly score a remarkable podium.

Things did not start well. Brabham was late to the track and had an issue with the brakes, which contributed to a crash in practice. That meant he had to take over Les Leston’s car, and Brabham lined up near the back of the 16-car field.

Brabham soon, however, moved through the pack, helped by a dramatic accident at the front.

Stirling Moss had grabbed the lead at the start but on lap five he arrived at the chicane too fast, possibly due to a brake problem. The Vanwall struck some telegraph poles and in the ensuing accident the Ferraris of Peter Collins and Mike Hawthorn were also damaged beyond immediate repair.

“I was behind them and I can only remember a big cloud of smoke and dust and straw everywhere, big black lines reaching right down past the chicane,” said Brabham in his autobiography When the Flag Drops. “They were quite lucky to get out of that.” 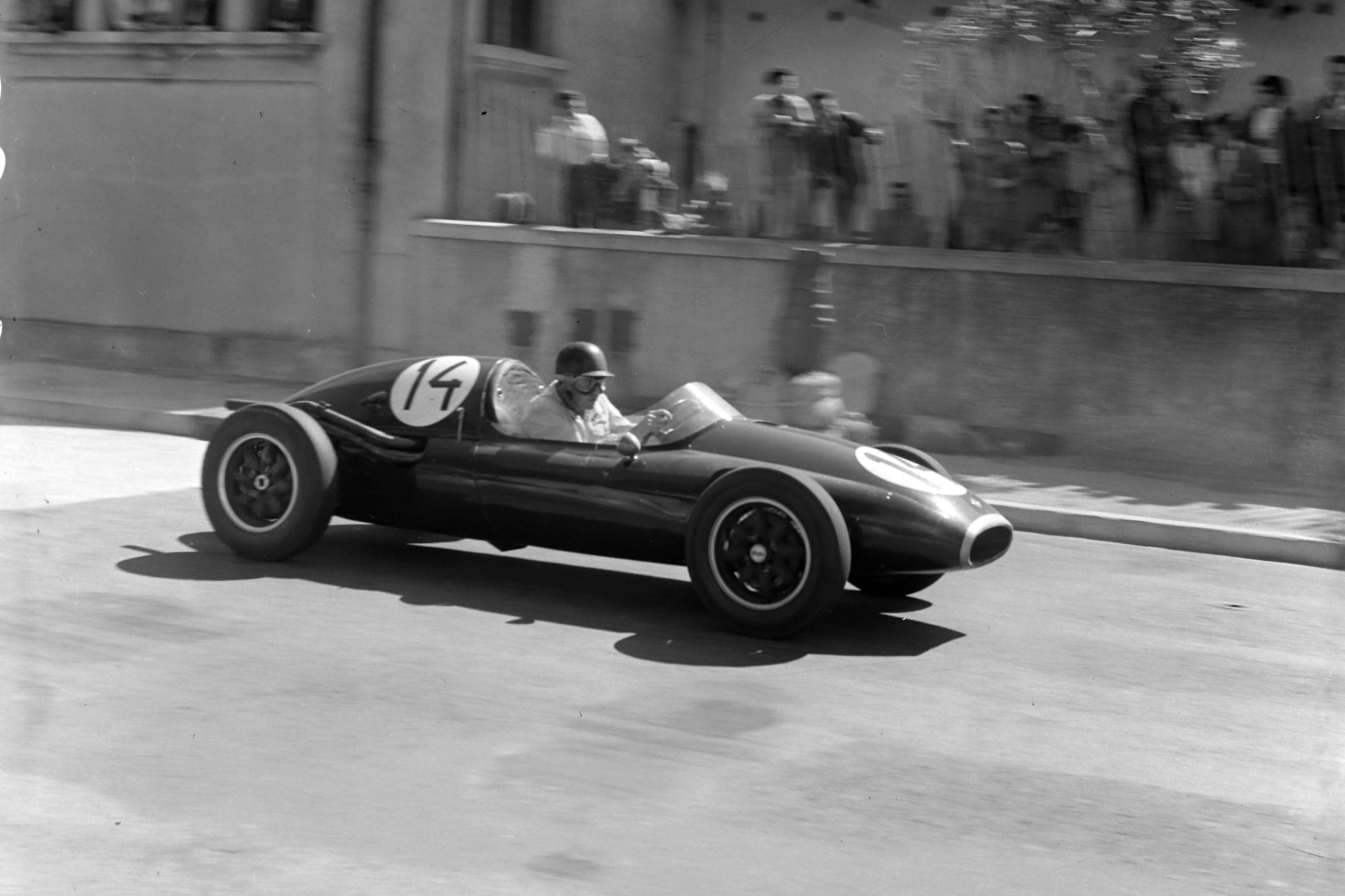 Several other drivers also made early mistakes, allowing the Avon-shod Cooper to gain more places. Brabham got the better of Ron Flockhart’s BRM and rose as high as fourth in the first half of the race before having to stop for fuel. As well as being down on power, this replacement Cooper did not have the extra, long-range fuel tank fitted so could not run the race non-stop, unlike the other runners.

Brabham nevertheless soon repassed Masten Gregory’s Maserati for fourth after the pitstop. When the engine of Wolfgang von Trips’s Ferrari failed in the closing stages, the diminutive Cooper was promoted to third. The only cars ahead now were the more powerful Maserati of Juan Manuel Fangio Maserati and the Vanwall of Tony Brooks.

Brabham’s fastest lap was only 1.6 seconds slower than Fangio’s, whereas he’d been more than 6s away in practice, and a brilliant podium finish on only his third world championship start looked in sight.

Then the Climax engine stopped. “The fuel pump drive had failed,” explained Brabham. “I coasted over the top of the hill and down past the station to the waterfront, and came to a halt just before the tunnel.”

But Brabham wasn’t done just yet: “In those days I didn’t like to be beaten, so I got out of the car and pushed, I was eager!”

After three hours of racing around one of the world’s most punishing circuits, Brabham pushed the Cooper through the tunnel to the chicane, up to Tabac, and along the harbour side to reach the finish, to tumultuous applause.

“The worst thing about pushing the car home wasn’t so much the exhaustion as losing third place,” added Brabham. “And the really scary part was going through the tunnel with all these powerful great cars screaming past in the dark!” 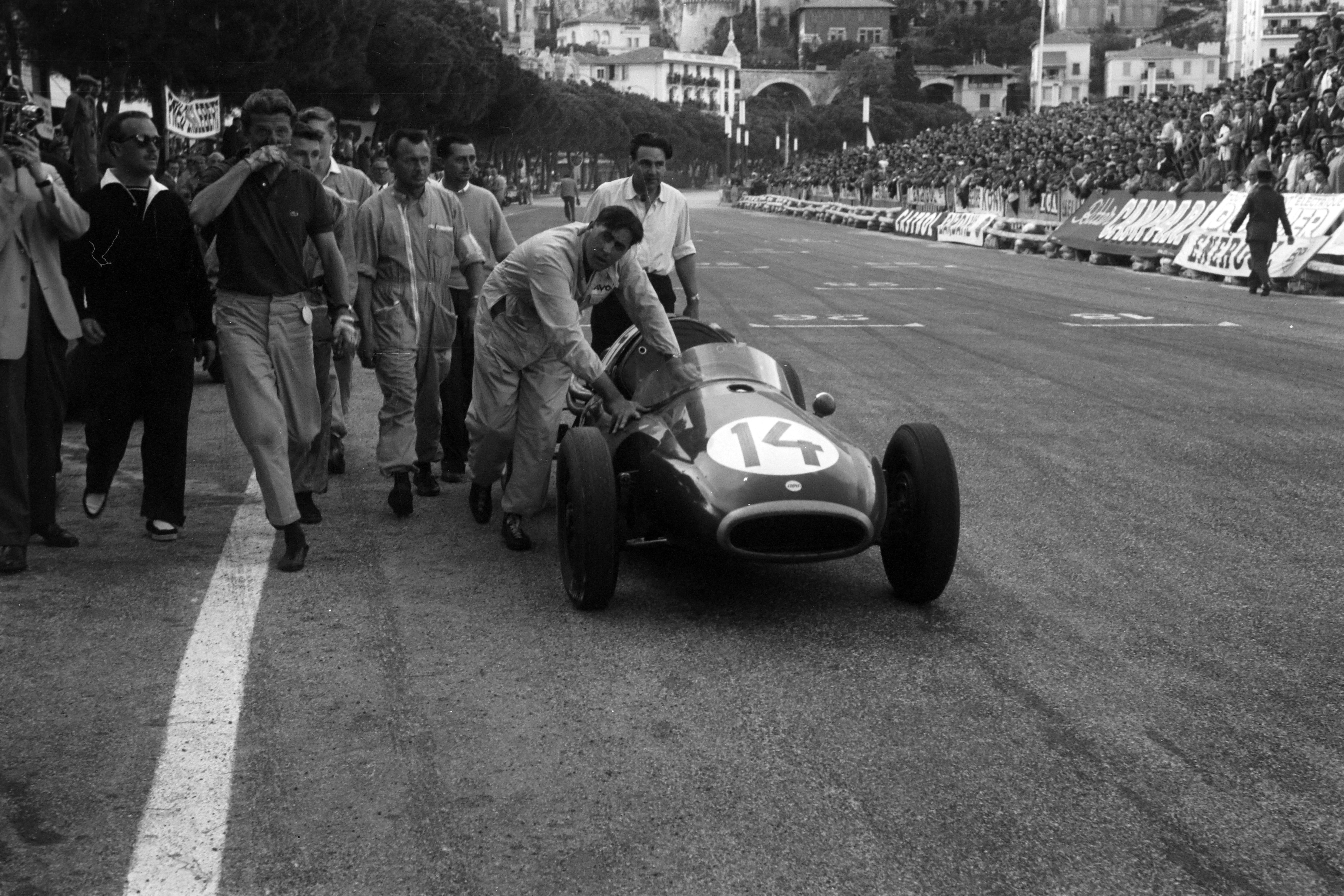 He was classified sixth, one place outside the points, but had made his mark. “That was the start of Cooper’s success in grand prix racing,” reckoned Brabham.

Autosport’s founding editor and GP reporter Gregor Grant agreed: “Sensational would be the best word to describe Brabham and the hastily rebuilt Cooper. His was one of the classic performances in motor racing that delighted everyone.”

Two years later, Brabham would win the race for Cooper on his way to his first world title.

On this day: Monaco 1970 revisited Monaco 1970: When Brabham crashed on the last lap