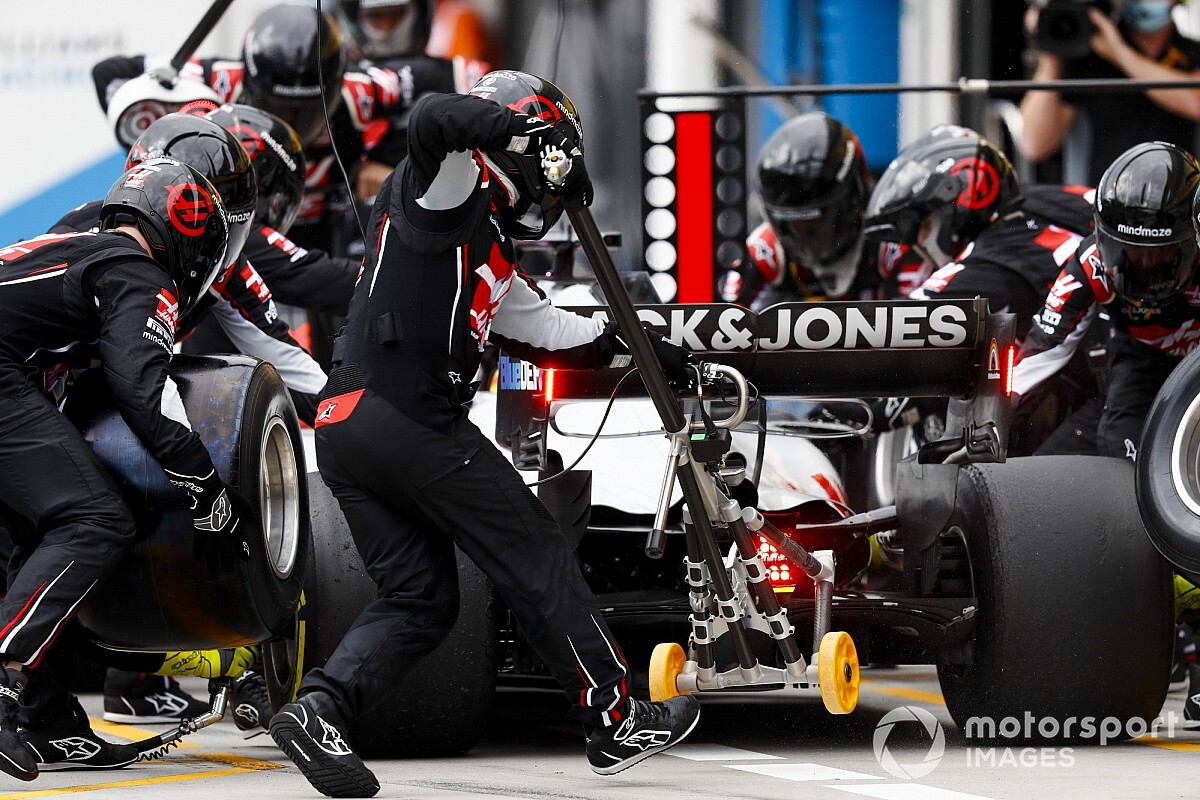 The call to make the Haas drivers pit for dry tyres on the formation lap of the Hungarian Grand Prix was helped by a team strategist at the factory who had had to fly home after breaking his arm last week.

The outfit has had a difficult start to 2020, with its form suffering after Ferrari's engines took a step back over the winter.

But a bold call to change tyres before the race start at the Hungaroring, a decision that is currently under investigation for being an illegal driver aid, was made by Mike Caulfield, who had injured himself in Austria.

Team boss Gunther Steiner said: "He's normally at the race but he fell off his bike in Austria and had to go back for an operation."

Having set off from the grid on rain tyres, with Romain Grosjean on intermediates and Kevin Magnussen on wets, the team saw an opportunity to gain from starting the race following a pitstop.

Reflecting on the decision, Steiner added: "In the beginning, it was like if you start where we were lined up and you don't do anything different, it's difficult to make any gains.

"So Kevin wanted to try some wet tyres, and then immediately saw on the formation lap, that it was drying up.

"And then there was very little chatter between our strategists, one of whom is sitting in England this week, because he broke his arm last week."

"So one of the two – one is here, obviously – said at some stage 'Hey, let's go to dry, it's drying up. That's a chance', and then it was very, very quick decision to do this.

"They discussed between people and we just did it, you know. There was no big discussion or anything. It's just that would be a good idea to let's try it, you know. We have nothing to lose."

The tyre change allowed its drivers to run as high as third and fourth at one point, before falling down the order as quicker cars came through. However, Magnussen was able to hold on for eighth at the end.

Steiner said the result was hugely rewarding for the outfit, which has faced some difficult times during the lockdown.

"It's important for all the people," he said. "We were in furlough for three, four months before going to Austria and in Austria results weren't fantastic to say the least.

"The guys have been on the road now for third week, so going away from here with points is something which is like a morale booster.

"Points speak for themselves for a race team. So I think everybody did a good job. Nobody gave up and we got some points. You know, that's the most important thing."

UPDATE: After the investigation, Grosjean and Magnussen were both hit with a 10-second time penalty for instructions received on the formation lap.

The 10-second penalty drops Magnussen from ninth to 10th in the final classification, handing one position to McLaren's Carlos Sainz.

Grosjean falls from 15th to 16th as a result of the penalty, dropping behind Alfa Romeo's Kimi Raikkonen.