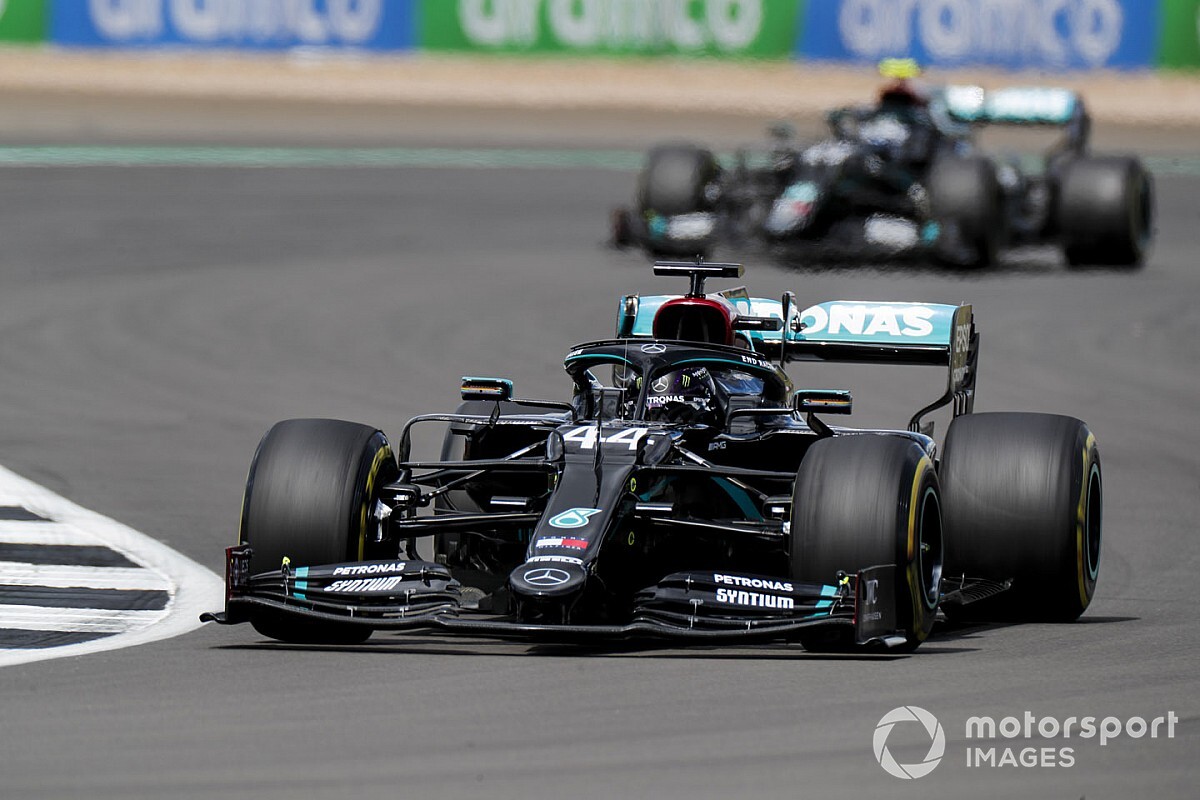 Lewis Hamilton says he was pushing “pretty flat-chat” throughout Formula 1’s 2020 British Grand Prix because of teammate Valtteri Bottas’s chase in second, ahead of their twin late-race tyre failures.

Hamilton only just held on to win a record-extending seventh British GP win ahead of Red Bull’s Max Verstappen after both Mercedes cars suffered front-left tyre blow-outs on the final laps of a race they had controlled before that point.

Hamilton led every lap of the first of two F1 races to be held at Silverstone in 2020, with Bottas staying close until the closing stages and Verstappen steadily fading to 10-seconds adrift.

But Hamilton’s lead over Bottas extended quickly in the laps before the tyre issue struck with just over two tours of the race left, with Hamilton then suffering his own problem as he ran down the Wellington straight on the final lap.

“We were pretty flat-chat, to be honest,” Hamilton said when asked by Motorsport.com in the post-race press conference how hard the two Mercedes drivers had been pushing before the tyre failures.

“Valtteri was obviously chasing and keeping the gap, it was between 1.2-2s for a good period. And then all of a sudden he started to fall away.

“I managed to keep good pace and he started drop away – I think it got to seven seconds at one stage, so I’m not really sure what [happened].

"I’m sure he just killed that left-front tyre, I’m assuming, and it started to drop off for him.  But for me the car was feeling fine, so I kept up the decent pace.”

Hamilton also explained that even though Verstappen spent much of the race adrift of the leaders, his presence meant the Mercedes cars were not turned down on power.

"To see the Red Bulls as close as they were in terms of pace, I think that’s real,” he added.

“And it wasn’t a case of us all turning down or anything like that, or backing off.

"We’re going to have a close race potentially next week [with the 70th Anniversary GP at the same venue], maybe.”

Mercedes boss Toto Wolff said his drivers were warned about their tyres, but he explained the team did not want to interfere in their battle for the win.

“Certainly they were pushing each other maybe a little bit beyond what we would have wanted as a team but I guess you need to let them race,” said Wolff.

“We warned them, that the tyres need to make it to the end.  They were both aware that they could lose P1 or P2 with a failure and they are very experienced, so it's then down to their decision once they get all the input from us.

“I don't want to interfere in the racing.  We can't say to Valtteri 'back off, let's cruise home' and we didn't do that.

“So whatever the reason for the failure was, certainly the front-left was hammered and under heavy duty cycle but ultimately the debris didn't help either so I'm quite curious to see what Pirelli's analysis is going to show and I'm sure they're going to take the right decisions.”