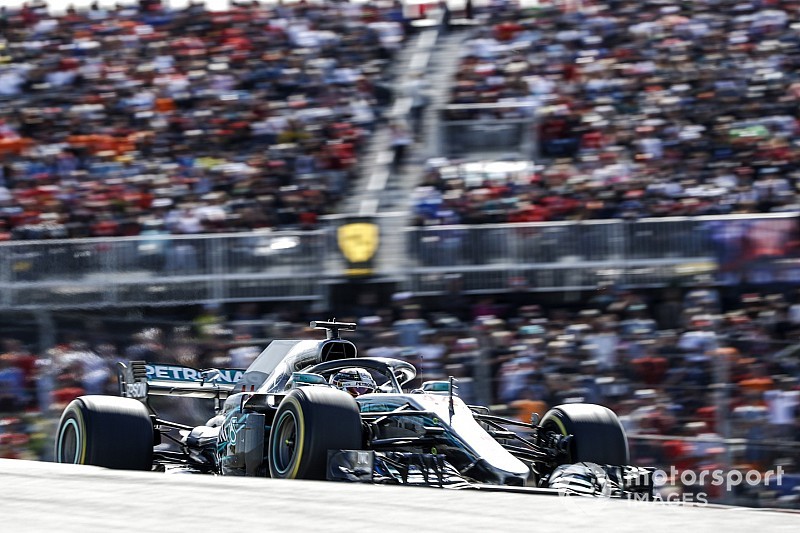 Lewis Hamilton has admitted he gave Max Verstappen "way too much space" in his failed bid to pass his Formula 1 rival for second in the United States Grand Prix.

Hamilton's two-stop strategy meant he was forced to catch back up to Verstappen and Ferrari's eventual race winner Kimi Raikkonen and mount a late attack.

Verstappen ran wide exiting the hairpin with just over two laps to go, which allowed Hamilton alongside and led to the two drivers battling wheel-to-wheel before Hamilton eventually ran wide off-track the fast double-right trying to overtake on the outside.

"I had to be very, very careful how I navigated around them," Hamilton said of racing Raikkonen and Verstappen while trying, unsuccessfully, to clinch the 2018 F1 title.

"Championships are not won by fighting and making silly mistakes.

"I went through that corner, I gave him way too much space just to be sure that I didn't get clipped, for example, didn't get taken out because I didn't know if you [Verstappen] would understeer into me or could be aggressive."

Hamilton said that if he was fighting his title rival Sebastian Vettel in that moment then he "would have been a lot more tighter and more aggressive".

Raikkonen, who Hamilton went wheel-to-wheel with in the first stint, was seeking a first victory in five and a half years while Verstappen sniffed a rare victory shot having started the race down in 18th.

Hamilton said he had to treat the situation differently, especially as title rival Vettel was behind him and poised to lose even further ground.

"These other guys they want to win the race probably just as much as me but they are willing to go and risk it for the biscuit," said Hamilton.

"I don't need to be in that mindset. I just need to accumulate points and think of the long game.

"If I'd been aggressive with Max for example, Seb could have finished third or second and I could have lost ground today so I think it was good decision making."

Verstappen explained he was left vulnerable to attack because he was so close to Raikkonen.

"I was struggling a bit more with the tyres, so then Lewis came close and we had a few corners where I had to close the door a little bit," said Verstappen.

"Then he tried around the outside, but I was on the edge already in the fast corners so I was just sliding a lot."

When Hamilton suggested he had given Verstappen too much space, Verstappen replied: "I think you could have squeezed a bit more, yeah!"

Vettel: I had speed to win in Austin