How Hamilton can win his sixth F1 title today 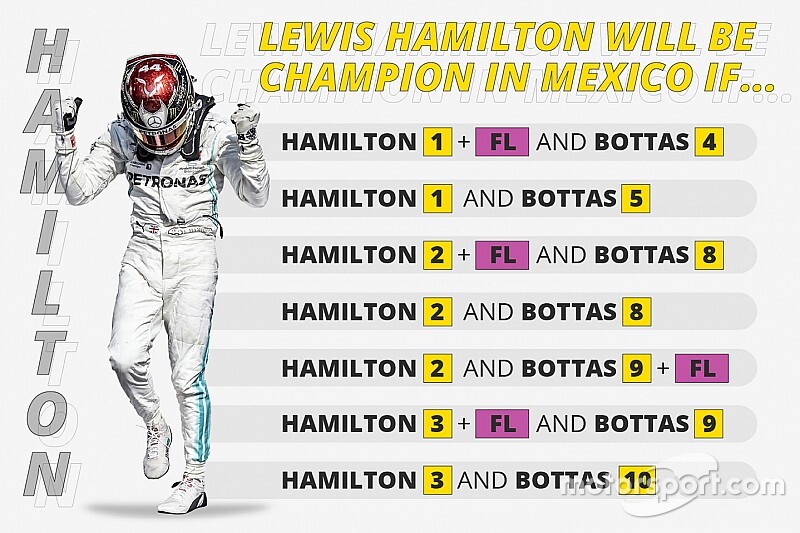 Bottas’s victory in Japan two weeks ago trimmed Hamilton’s advantage but the Briton still holds a 64-point lead with just four races left. Hamilton needs to extend that by 14 points in Mexico to become champion again, as only 78 points will be on offer over the final three grands prix.

However, amid the form of the rival Ferrari team and Red Bull’s pace at the Autodromo Hermanos Rodriguez, Hamilton said he does not “anticipate it will be Mexico” where the championship is decided.

Victory alone will not be enough for Hamilton to win the title this weekend. Even if Hamilton wins and bags a bonus point for fastest lap, he will need Bottas to finish off the podium in order to have an unassailable lead. Conversely, Hamilton can finish as low as third and win the championship if Bottas finishes no higher than 10th.

If Hamilton is not on the podium – which has happened at the previous two Mexican GPs – he will need to wait at least one more weekend even if Bottas fails to score points at all.

However, if Hamilton sets fastest lap, the permutations shift slightly. He will be champion if:

While Hamilton's sixth title is effectively a matter of time, barring a stunning turn of events, Mercedes boss Toto Wolff said a sixth consecutive championship double is something “no one would have dreamed" of.

However, he anticipates neither of his drivers will have a straightforward grand prix in Mexico: “We know that the four remaining races are not going to be easy and we expect Mexico to be the most difficult one for us,” said Wolff.