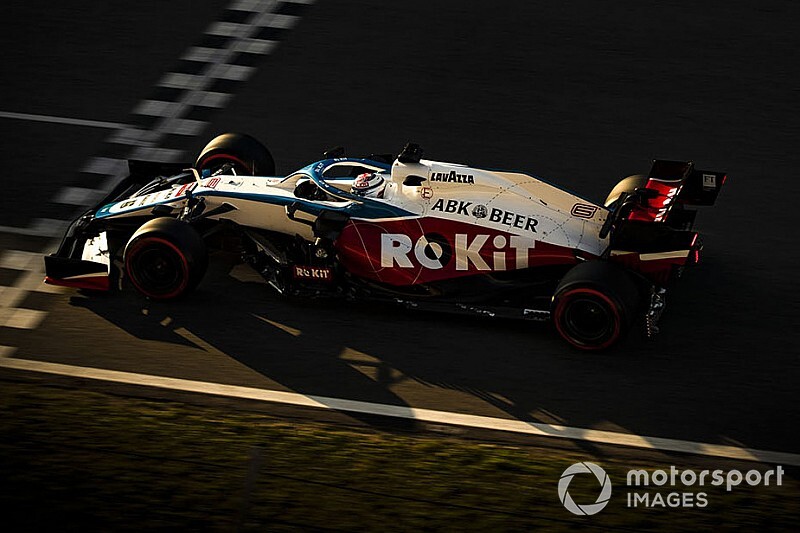 Nicholas Latifi says that his Williams Formula 1 team has not yet fully addressed all the issues that it faced with last year's car.

Williams had a generally promising first test with the new FW43 in Barcelona last week, although Latifi lost valuable track time with a Mercedes engine issue on Friday.

The Canadian rookie acknowledged that the Grove team has made a significant step since its disastrous start to the 2019 season, but he cautioned that more work has to be done.

"There definitely some positive signs," he said. "There's still some negative things with the car, some things that we still have to try and sort out, some issues, let's say, characteristic carrying over from last year, so not all the problems are solved. We'll have to find out come qualifying."

Asked by Motorsport.com about the turnaround since this time last year, he agreed that the team is in a much stronger position.

"It sounds silly to say but just the fact that everything was ready on time and waiting on the light to go out on the first day of testing was a huge psychological boost for the team, especially after what happened last year.

"From my first impression of the car when I was driving on day one, I feel could for sure it's a step forward, which is great to feel as a driver because you can tell all the hard work that guys were doing over the winter, the guys and girls back in the factory, was paying off.

"So how much of a step forward it is? For sure all the other teams have made a step forward, we'll find out come the first few races. We just have to wait and see."

Latifi says his initial feedback tallied with that of teammate George Russell.

"Even from last year when I drove side by side with him in FP1s or when I was in the tyre tests, rookie tests, I was always kind of very in line with what the race drivers were saying.

"And speaking specifically about this day and a half I've driven so far, I'm pretty much mirroring exactly what he's feeling. This I guess is good for the team, that they have a uniform direction to push the car."

Asked to quantify his goals for his rookie season Latifi said his initial aim would be to match Russell's pace.

"I think it's still honestly quite difficult to set some, let's say, target goals in terms of positions and things like that, just because I think until the end of the second test, we're not exactly sure where we're going to be as a team in the competitor running order.

"That being said, obviously in F1 your biggest benchmark is always your team mate because you're in the same car. I have a very good team mate in George, so I'm looking forward to getting to race side-by-side and go up against him and see how I can fare against him.

"So I would say the goal right now is just to get on his pace as soon as possible. Obviously, coming into F1 as a rookie, for sure he'll have an advantage in the first races. I just hope we get there as quick as possible."

Latifi acknowledged Russell's suggestion that he is the well prepared for a rookie. However he pointed out that he has less opportunity to test this year.

"I would say like my overall F1 experience definitely is giving me an advantage coming in as a rookie.

"So the track time leading up to the first few races is definitely down. But I feel as well prepared as I could be really, coming into my first full season."