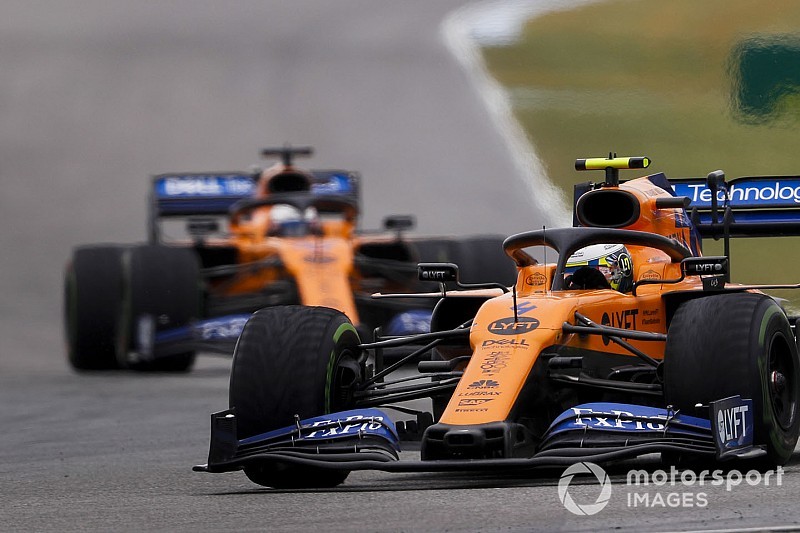 Lando Norris should escape further power unit penalties in the Hungarian Grand Prix after an investigation by his McLaren Formula 1 team and Renault traced the source of his retirement in Germany.

Norris was forced to retire after suffering a loss of power from the combustion engine immediately after a pitstop.

However, the subsequent investigation has determined that cause was an issue not with the power unit itself but with an ancillary, which is being modified for the Budapest race.

A McLaren spokesperson told Motorsport.com: "Lando's PU suffered an ancillary failure that forced us to stop the engine. We will fit a new design in Hungary. The PU has not been damaged and will be reused in Hungary."

Although no more details were given, it is understood that the part concerned was a Renault design.

Norris took a power unit penalty in Germany after experiencing a battery issue in qualifying meant he had to take a new energy store, control electronics and MGU-K.

He still has scope to take a third MGU-H without penalty, but any other new elements he takes from now on will trigger further penalties.

Teammate Carlos Sainz, who has already used four V6s, turbos and MGU-Hs, is on the bubble for all six elements.

"Of course it's a concern, taking all these penalties at the moment, that early in the season," he said.

"But again we appreciate the ongoing development that Renault is doing in making steps, and of course it's not the target to get all these penalties, but that's the situation that we're in at the moment. Hopefully together with Renault we can improve this situation."