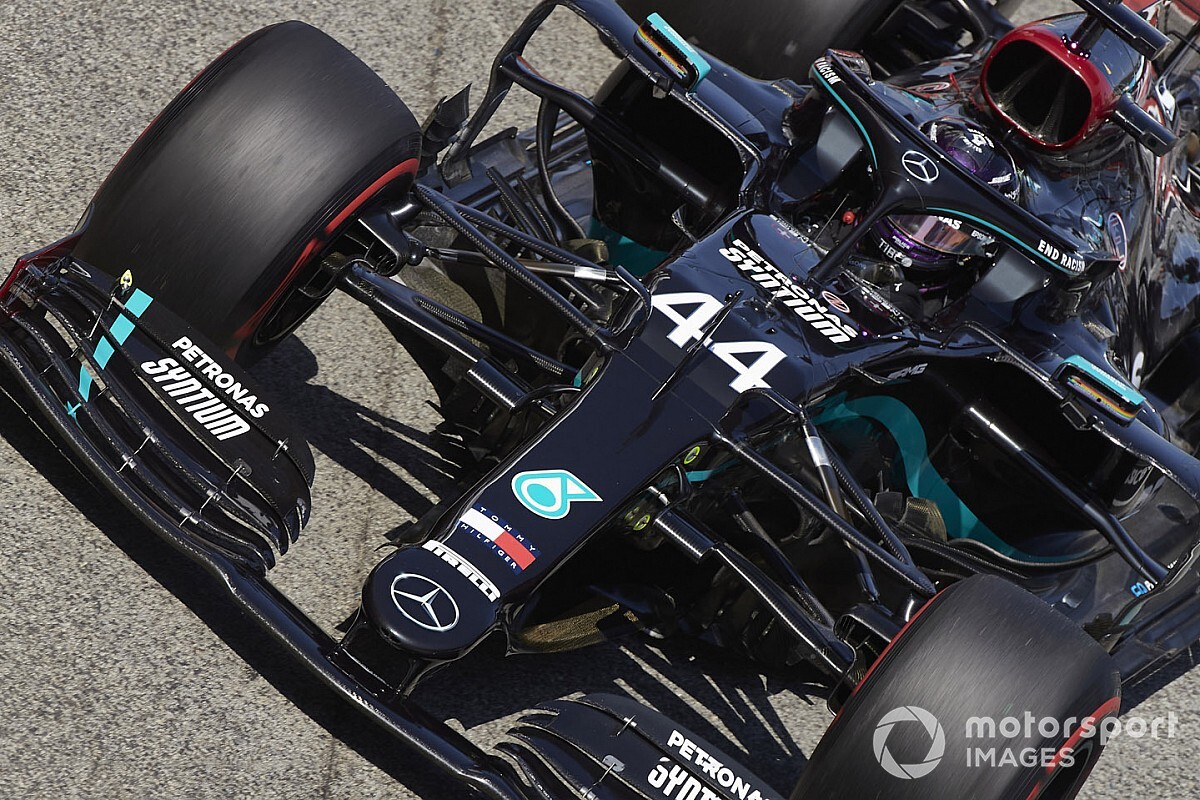 The 60-minute session built to a crescendo after a fairly lifeless start, with Hamilton finally going quicker than his Mercedes team-mate on his final qualifying simulation as the track grip increased.

It took almost 10 minutes for a time to be set as the teams back-loaded their running on the scorched asphalt, which by this point at reached 44 degrees.

Lando Norris set the initial pace on the medium tyres with a 1m19.620s, with Kimi Raikkonen, Sainz and Charles Leclerc then bringing the benchmark down – but only the Alfa Romeo driver ran the soft tyres at this stage.

Approaching the halfway point, the Mercedes drivers appeared on the red-walled softs, with Bottas immediately taking the top spot with a 1m17.971s, with Hamilton following him on the same tyre and going 0.353s slower with a slight lock-up the meant he missed the left apex at the final chicane.

Hamilton cut the gap to 0.106s on his second run, with Bottas abandoning his own second lap after a slow first sector.

But after several drivers – including Sainz – gained a chunk of time as the grip increased in the final stages, the session's fastest times were set in the closing stages.

Bottas initially improved P1 to a 1m17.373s, but Hamilton gained significantly in the second sector – neither Mercedes driver troubled the quickest times in the opening part of the lap as they worked to keep the softs alive at the end – on his own final qualifying simulation.

Verstappen had slotted into third each time he went for a run on the softs, eventually trialling Hamilton by 0.515s.

Sainz's final effort had started the run of quick times at the end and he was shuffled down as a result, but only to fourth, with Racing Point's Sergio Perez taking fifth after only moving to the softs from the mediums for a final flying lap in the closing stages.

Leclerc ended up sixth for Ferrari ahead of Pierre Gasly and Lance Stroll, with Alex Albon ninth in the second Red Bull – 0.6s slower than Verstappen.

Like the Racing Point cars, Albon only ran the soft tyres towards the end of the session after starting out on the mediums.

Daniel Riccardo rounded out the top 10 ahead of his team-mate Ocon, who brought the session to an end with two minutes still to run after his bizarre crash at the exit of Turn 3.

Ocon had just been overtaken by Magnussen – who ended up 17th for Haas – when the Danish driver appeared to slow on the exit of the long right hander and drift to the middle of the track just as the Renault racer was accelerating to the same point.

At the last moment, Ocon avoided hitting Magnussene's car, but in doing so he speared right and went straight into the wall on the inside of the track, smashing his front wing off, damaging his rear wing as the car came around and bringing out the red flags when he came to a stop.

The incident is being investigated by the stewards and the drivers have been summoned to see the officials at 1.30pm local time.

In the other Haas, Romain Grosjean could not repeat his high placings from Friday practice, which he was unable to explain, as he finished 13th behind Sebastian Vettel.