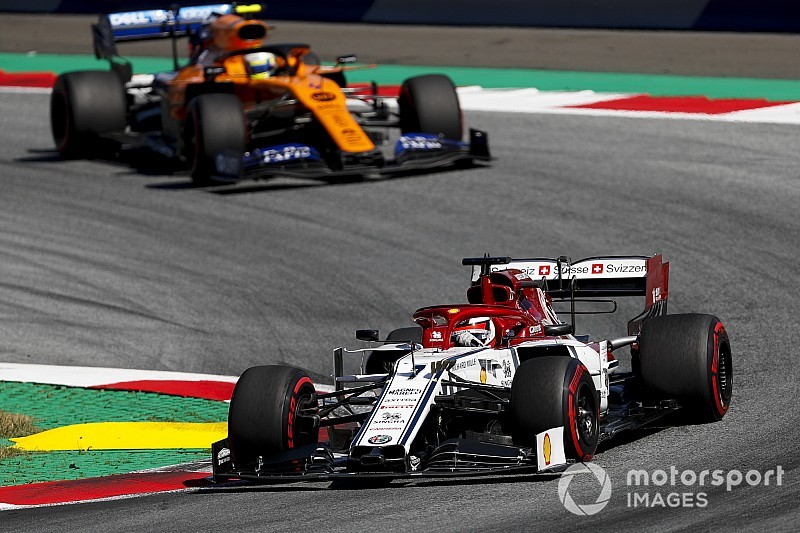 Alfa Romeo Formula 1 boss Fred Vasseur is confident that the Swiss team can take the fight to McLaren in the second half of the season.

Following a disappointing run of non-scores in Spain, Monaco and Canada, Kimi Raikkonen has finished in the top 10 in the last five races, although along with teammate Antonio Giovinazzi he dropped out of the points in Germany due to a clutch infringement.

Those penalties are now under appeal, and will be reviewed in Paris on September 24. However Vasseur believes that even without recovering the lost points the team can climb up the order from its current seventh place.

“Consistency is important in the middle of the pack,” he told Motorsport.com. “I think McLaren is always there also, but I hope we are able to fight with McLaren in the second part of the season.

"We have to be consistent. We have to get the cars into the points every single weekend, and try to do it with two cars.

“I think we can be optimistic. If you compare with Barcelona, we were far away, and we’ve improved consistently from that stage of the season. We are pushing hard to bring updates, and we have to keep the same path for the last part of the season.”

Vasseur cited the Hungarian GP as an example of the team’s current strong form, as the track wasn’t expected to suit the car.

However, Raikkonen finished seventh and second to McLaren’s Carlos Sainz in the midfield battle, and even managed to hold off the Mercedes of countryman Valtteri Bottas in the closing laps.

“I was not very optimistic before Budapest, because I think it’s not our best layout,” said Vasseur. “But Kimi did a fantastic job in the race.

“The pace was there from the beginning. The key for us was to have a good start and be in front of Grosjean. We knew that the race pace would be difficult for Haas, and it was important for us to be in front of them.

“Kimi was even holding off a Mercedes at the end, it was quite a nice situation. At least were able to keep Bottas behind for five or six laps.

“I think it was a good step forward again for us. It’s a great feeling before the break for the whole team. We had a tough time in the last two weeks.”

Although Alfa Romeo will benefit from engine supplier Ferrari's superior straightline speed at Spa and Monza, Vasseur doesn’t expect those tracks to be particularly favourable: “It’s also an issue of aero package. I think we will come back around Singapore, at normal tracks.”