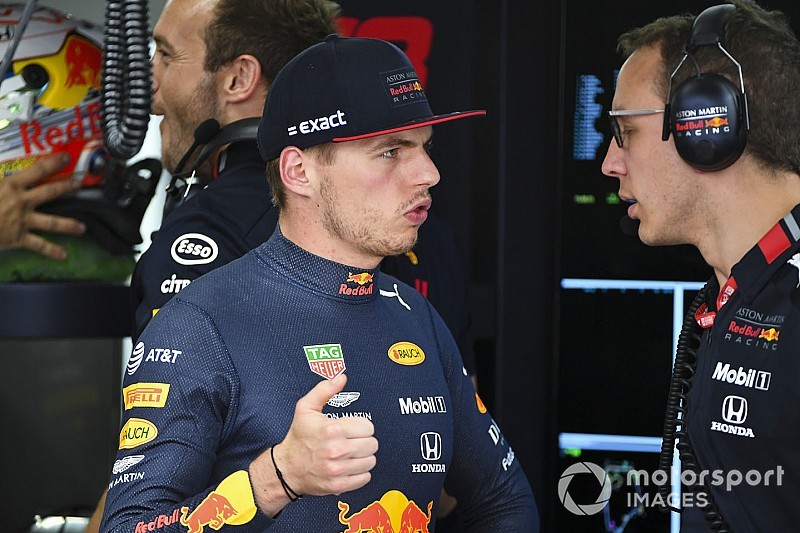 Max Verstappen says it was a “shame” he had to change his tyre strategy in qualifying at Hockenheim due to an issue with a “different mode” on his Red Bull Formula 1 car.

Verstappen had a scare during the second German Grand Prix qualifying segment when he reported a power loss on his opening run.

The Dutchman had gone out on the medium tyre, aiming to lock it in as his starting compound in case of a dry race on Sunday, but was forced to abort the run and rejoin the track on softs.

He would go on to progress to Q3 and qualify second between the two Mercedes cars of Lewis Hamilton and Valtteri Bottas, which will both start the race on mediums.

“I tried a different mode for that run, but as soon as I crossed the start-finish line, somehow it just cut out, lost a bit of power, and then you know your lap is ruined, so I backed off,” Verstappen explained about his Q2 mishap.

“I went into the boxes, just to check everything, and we went out again, of course I had to use the other tyres, which was a little bit of a shame because I wanted to try and do the same [starting compound] like the other guys did, but that's how it is, and we just have to live with that. Second run in Q2 and then Q3, there was no problem.”

Verstappen also reported a turbo lag-like issue in the opening segment, describing it as similar to the problem that had held him back at Silverstone and that Honda identified as a calibration issue related to faster throttle application.

“I don't know if it's exactly the same but in the car it feels pretty similar,” Verstappen said. “They're all working hard, of course, to try and get on top of it.

“I think in Q3 honestly it was fine, and that's when it matters, of course.”

Verstappen was some 0.346s off Hamilton’s Q3 effort, and admitted the issues that sidelined the two Ferraris were fortunate for his own qualifying.

He added: “I think from Q1 to Q3 I felt like I had a bit of loss of grip, because in Q1 you always take your margins, but somehow in Q3 I just never really had the grip like I had in Q1. Of course, it was getting warmer, seemed like it was hurting me maybe even more at the time.

“Still, to be second for this race I think is good, happy about that.”

Teammate Pierre Gasly, who was fourth in Q3 and had been just a tenth slower than Verstappen on his final lap only to see it deleted due to track limits, said his qualifying was a relief after an "annoying" Friday crash.

Gasly confirmed he too was experiencing turbo lag issues. "It’s costing a bit but not so much. It’s more in the way that you cannot predict what is going to happen and be consistent," he said.