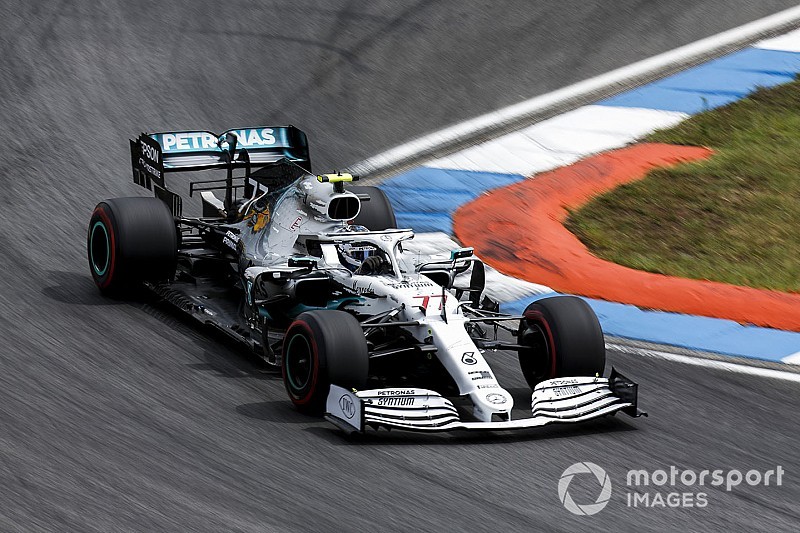 After Ferrari, which had topped all three practice sessions at Hockenheim, suffered a nightmare first two thirds of qualifying – with a turbo airflow problem stopping Sebastian Vettel running in a Q1 and a fuel system issue putting Charles Leclerc out without a Q3 time – the fight for pole was blown wide open.

Hamilton eventually prevailed ahead of Verstappen, with Bottas ending up 0.362 seconds behind his teammate and 0.016s off a front row spot.

He told media at the post-race press conference that a suspected braking issue may have cost him “two or three tenths”.

“As a team we overall had a good result – Lewis did a really good job in qualifying,” said Bottas. “Also we got a bit lucky with the Ferraris, so we don't know how quick they could have been in Q3.

“But myself I did feel OK in practice three, there were no worries and it felt like qualifying should be fine and interesting. But in qualifying I struggled a lot with the brakes, in Turn 2 especially, six, then eight – so all the big brakings.

“I was locking up many times, going straight, so just confidence under braking and the bite of the brakes was varying from one lap to the other.

“So that made it difficult. I felt like it was maybe [worth] two or three tenths I could have improved in quali three by getting everything spot on, but it was not more than that. So it was not the easiest qualifying, I'm keen to have a look why.

“[The issue was a] little bit surprising. I think yesterday was a bit tricky overall, this was down to the temperature, it's quite sensitive and [I] didn't get many clean laps.

“Practice three I felt good, I was really looking forward to the qualifying and knowing that things had improved and should be all good. But I struggled a lot with braking in the qualifying, and just the consistency was not there.

“I wasn't always sure when I hit the brake pedal what was going to happen – if I'd lock the front or not."

After qualifying, Bottas was hit with a €600 fine for speeding in the pitlane.