Jun.20 (GMM) Bernie Ecclestone has revealed he thinks Sebastian Vettel is "too young" to switch to Ferrari. 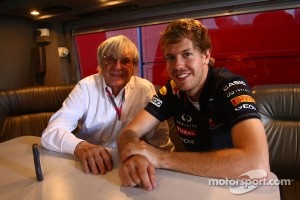 The F1 chief executive is famously close to Red Bull's 24-year-old double world champion Vettel, who according to recent speculation could move to Ferrari in 2014.

"Not now. He's too young. Normally you finish your career with Ferrari," 81-year-old Ecclestone said in a joint interview in Germany's Sport Bild with Stefano Domenicali.

Should Vettel make the switch, however, Ecclestone said he doubts the young German would clash with Ferrari's beloved number one, Fernando Alonso.

"There shouldn't be a problem," said the Briton. "Both of them are racers who are constantly looking for new challenges.

"Both of them would think he could beat the other, because they're both very confident," added Ecclestone.

The 'F1 supremo' also mused about his sport's rules, sympathising with those who are accused of skirting too close to the boundaries of legality.

"If I were a team boss," said the former Brabham owner, "I would definitely try as best as I could to exploit the rules as well as I could."

He also threw a barb at F1's governing body.

"I really understand hardly any of the FIA's decisions," said Ecclestone. "I think the technical rules should be written so that even someone like me can understand them."

Ferrari team boss Domenicali agreed: "The fans do not understand why a car is legal today and illegal the next, which for the sport is a problem for the credibility."