Williams trialled a new front wing design during practice for the Japanese Grand Prix, as the team performs development work for its 2020 Formula 1 design concept.

Senior race engineer Dave Robson had previously revealed that the team would “experiment” at Suzuka with a new design concept as an assessment for next season, which both George Russell and Robert Kubica trialled in FP1.

The test wing follows the trend of using the inboard section to generate the majority of downforce, while trimming back the outboard ends of the wing elements to promote airflow outwash.

In addition, the flap adjuster has been brought further inboard, reducing the adjustable proportion of the upper two elements.

This has been partnered with a new endplate, which eliminates the cut-out section but now includes a small ridge at the rear of the footplate to ‘trip’ the airflow into moving outwards.

Kubica began FP1 with the new wing, while Russell ran simultaneously with the old specification to test them back-to-back in the same conditions.

Midway through the session, the two drivers switched specifications, giving Russell time with the new design.

Williams continued its aero evaluation into FP2, keeping Kubica on the new wing for the session while Russell provided baseline tests with the old spec.

When asked by Motorsport.com whether the new wing was a step forward, Kubica was positive - although underlined that the tests were mostly for next year’s benefit.

“From what I know,” said Kubica, “[the plan] is more evaluating the front wing for next year and not necessarily whether it should give better performance on our current car.

“It should unlock the potential to next year’s car. Although I will not be there, I’m happy to help and try to give precise feedback - and then it’s up to the team to develop it better for next year.”

Russell said that the new wing “wasn’t meant to be a massive difference”, but that gathering data was the most important aspect of running the new wings rather than outright performance.

“[The difference] won’t be night and day. The guys have to gather the information. Plenty of time tomorrow to look at that.

“There was a lot of data we gathered, I think for the team it was definitely beneficial. We did everything we wanted to, that was spot on.”

The new wing will not remain on the car for the rest of the weekend, as Williams only has one for this round. 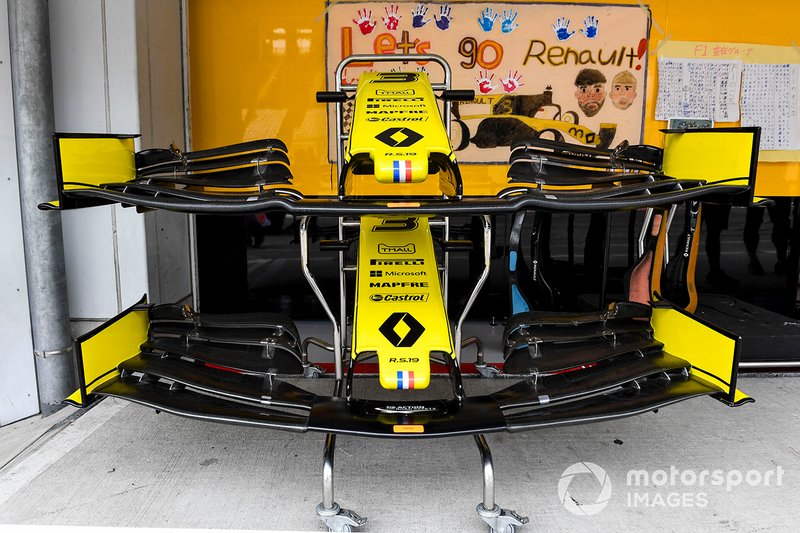 Renault also had a new front wing, which is expected to remain on the cars for the rest of the weekend.

The elements have been completely reprofiled, shortening the upper two elements to allow the lower elements to include small slots, satisfying the regulation which allows five distinct elements within a single plane.

These slots help to manage the rotation of airflow here a little more, and the tunnel-like curvature at the wing’s inboard section further dictates the path of the airflow.

The top element has a straighter trailing edge, and the point at which it connects to the endplate has been reshaped to collect more downforce overall.