Interview with Williams race driver Mark Webber Q: When was the first time that you realized that you wanted to be an F1 driver? Nick Heidfeld, Mark Webber and Antonio Pizzonia with the new Williams BMW FW27. Photo by BMW ...

Q: When was the first time that you realized that you wanted to be an F1 driver? 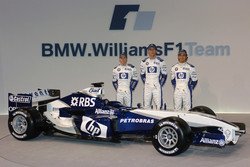 Mark Webber: I suppose it was when I first came to Europe. It was in 1996/1997, around that period, when I started to win some races. In Australia, you are never sure how real the possibilities to go into Formula One are. Then you come to Europe and start realizing that maybe it is possible. Of course it's a long way before you finally get into Formula One. You never think that it's going to be that achievable. In 2000 and 2001 I started testing for Renault. That was my first chance.

Q: Do you remember your feelings when you first drove an F1 car?

MW: Yes, the first feeling you have is how incredibly light the car is. It's so light, so powerful, and the braking is incredible. They generally do everything that you want, but after a few laps you have problems like understeer, that you know from the junior formulae. Of course it's very special, when you drive and F1 car for the first time.

Q: Do you have any role models?

MW: Yes, Alain Prost was a driver who I really looked up to when I was doing go-karts and Formula Ford. And Michael Schumacher was winning titles at this stage as well. You had to be impressed with what Michael did early in his career. Those two guys were the drivers enjoyed watching the most.

Q: Do you compare yourself with other Australian drivers, such as Alan Jones?

MW: I have to. It's quite difficult for young drivers to come into Formula One. Many guys have tried it and I was lucky enough to go through. Alan Jones was the last Australian to win a Grand Prix and, of course, Jack Brabham won a lot of World Championships, even one in his own car. They are the only two World Champions we have. I will try to build on that if I can. There's a lot of hard work to do. I haven't achieved anything in Formula One yet, certainly compared to what they achieved. But I'm with the BMW WilliamsF1 Team, so hopefully I can.

Q: Do you remember what team Alan Jones was driving for when he became World Champion in 1980?

MW: It was WilliamsF1, of course. Like I have said, he was the last World Champion for us. So it's 25 years and also 24 years since an Australian last won a Grand Prix, as he won his last race in 1981, I think. It's been a long time, but I will try to fix it.

Q: What has been the most emotional moment in your career so far?

MW: It was definitely my first Grand Prix at Melbourne when I finished fifth. This was not supposed to happen. I was supposed to finish maybe 17th or 18th. Minardi is a very small team and it was our first race together. It happened in Australia and the team boss, Paul Stoddart, is Australian as well. So the whole thing, very luckily, came together… it was a very special day.

Q: What role does fitness play in your life?

MW: Fitness is important for your concentration, your ability to do the Grands Prix consistently, and to be in good shape at the end of the race. The cars are quite hard to drive physically, if you are not in very good shape. They are getting a bit easier to drive now, with less grip and less downforce, Anyway, we still stand on top of it. I enjoy riding my bike, it's a good way for me to relax as well.

Q: What does success mean to you?

MW: If you are a competitive person you always want to do a good job. The fire that burns to compete against other people is what gets me out of bed in the morning. I'm a very competitive person, I want to do well at whatever I do. It's a short career in Formula One, it accounts for only 15 years of your life. So you have to do a good job when you are there and have no regrets when you look back.