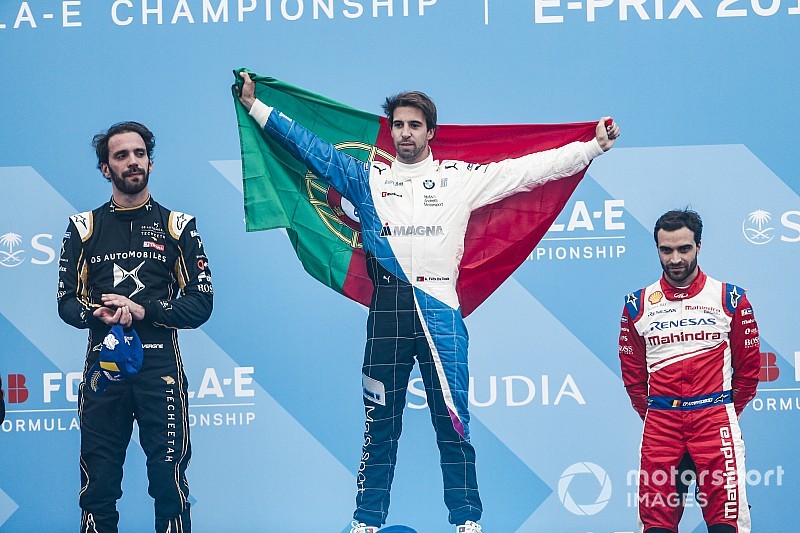 Antonio Felix da Costa won the Ad Diriyah E-Prix, the opening round of the 2018-19 ABB FIA Formula E Championship and the first race for the new Gen2 car.

Reigning champion Jean-Eric Vergne finished second, having led the middle phase of the race before being hit with a drive-through penalty for a technical infringement, with Jerome D’Ambrosio completing the podium for Mahindra Racing.

At the start, polesitter da Costa led away from the line – despite being lined up pointing towards the outside wall – while Sebastien Buemi blasted by Jose Maria Lopez around the outside of the first corner from third.

Vergne passed Stoffel Vandoorne, who had started fourth, on the first lap, where Edoardo Mortara went into the barriers at the official Turn 1 as the pack shot around from the starting grid on the main straight before reversing away.

The front four edged clear of the pack, before Vergne passed Lopez on lap one of what would become a 33-lap race, with teammate Andre Lotterer also getting by the Dragon driver.

As da Costa consolidated his lead, Vergne closed in on Buemi, passing him in a wild move around the outside of Turn 18 on lap nine.

Vergne then set about catching da Costa, while Lotterer also demoted Buemi to fourth at the same spot – but down the inside – on lap 12.

The top two ran nose-to-tail through lap 14, before Vergne seized P1, again going around the outside of Turn 18, despite da Costa’s fierce defence.

Vergne began to pull slightly clear while Lotterer stalked da Costa throughout the next phase of the race, before triple Le Mans winner shot by on the start/finish straight opposite the pit garages to take second.

But the two DS Techeetah drivers were then forced to serve drive-through penalties – just after Vergne had used his first attack mode activation – for going over the maximum permitted power while using re-gen, which dropped them back into the pack.

Da Costa therefore retook the lead on lap 24 and ran ahead of the battling Lopez and D’Ambrosio, with that pair switching places at the end of that tour as Lopez went through the attack mode zone but failed to activate the system.

By this stage, Vergne ran fifth, with Lotterer seventh, as the pair quickly surged back towards the front of the race.

Vergne took fourth from Lopez, who appeared to miss activating his attack mode on the second lap in succession, but on the next lap the Dragon driver stopped with a broken left-rear suspension.

That caused a full course yellow that was later upgraded to full safety car, with da Costa immediately activating his first attack mode.

The safety car period lasted three full laps, with the pack bunched up and da Costa leading D’Ambrosio and Vergne.

Just before the safety car came in, da Costa and Vergne took their second attack mode activations, with the leader immediately pulling clear of D’Ambrosio.

Vergne took second as he shot up the main straight on lap 30, and although he closed in on da Costa, the Portuguese driver held on to win by 0.4s and claim his first FE win since the 2014/15 season.

D’Ambrosio finished four seconds back ahead of Mitch Evans, who had climbed into the lead group late-on. Lotterer took fifth ahead of Buemi and FE rookie Oliver Rowland.

The Audi drivers Daniel Abt and Lucas di Grassi came home eighth and ninth, with the latter rising from 18th on the grid after having his best time deleted in qualifying.

Nelson Piquet rounded out the top 10 ahead of the Virgin Racing drivers Sam Bird and Robin Frijns, who also lost their best qualifying times for the same power infraction as di Grassi.

After some bold overtaking moves, Felipe Massa ended his first FE race in 14th – he had to serve a drive through penalty for the same reason as the Techeetah drivers, as did Alexander Sims, who finished 18th after getting a 10-second penalty for a second technical infringement.

Vandoorne fell down the order and came home 17th, while his HWA teammate Gary Paffett failed to finish due to a crash.

Felix Rosenqvist, standing in at Mahindra for Pascal Wehrlein, was the other non-finisher after stopping on the start/finish straight early on.