Alexander Sims led a BMW Andretti 1-2 in the second incident-filled race of Formula E’s Diriyah E-Prix, but his teammate Maximilian Gunther’s result is under threat of a post-race penalty.

Sims led the race from pole – his second of the event – and although the start passed by without incident, the rest of the race was heavily disrupted by a series of clashes in the pack.

Sims controlled the pace at the head of the pack – edging clear from his pursues while maintaining his energy levels compared to his rivals, a consideration that cost him in the first race on Friday.

He used his first attack mode on lap seven of what would become a 30-lap race, which boosted his advantage before the first flash point of the race occurred.

At the Turn 18 overtaking spot – the race’s first corner at the end of the main straight – da Costa, who had previously muscled his way past di Grassi at that turn, clipped Buemi just past the apex and spun the Nissan driver around.

Buemi plummeted down the order but rejoined the action in wildly unsafe manner that forced many drivers to take avoiding actions – and he was later given a time-penalty for his actions, while da Costa was given a drivethrough for causing a collision.

On lap 13 da Costa took his first attack mode and slipped behind di Grassi, but he attacked at the first corner of the next tour, which sparked the next incident.

As di Grassi checked up on the corner exit he was attacked around the outside by race one winner Sam Bird, who then lost momentum and was attacked in turn by Jaguar’s Mitch Evans.

Evans and Bird collided as they ran through the long right-hand Turn 4 – with Evans later handed a drivethrough over the clash – and Bird lost more ground on the slippery outside line and was hit from behind by Pascal Werhlein as he ran through the next corner, which put him into the wall and out. 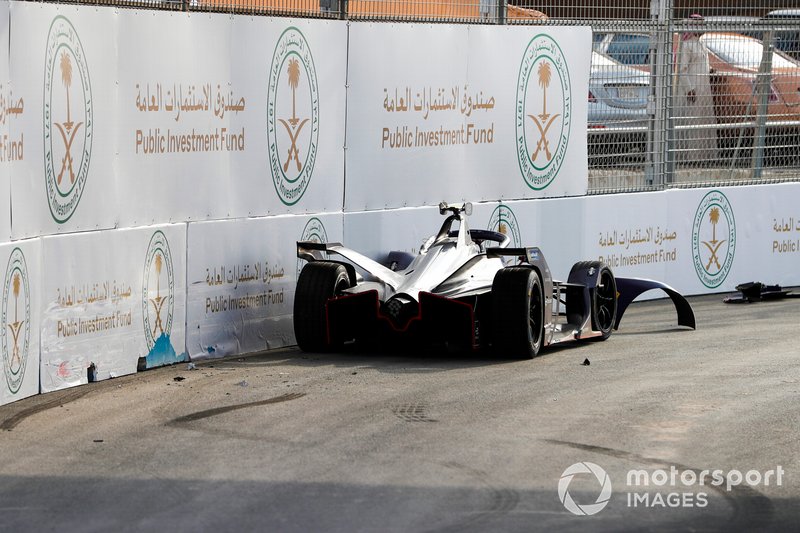 The safety car was deployed and Sims’ advantage was erased, and when it came in there was further chaos as several drivers – including Sims for his second activation – took the attack mode before passing the safety car line.

Da Costa slowed and allowed Sims back through but Gunther made up a number of places to leap into front-running contention and hit the rear of Stoffel Vandoorne’s car on the inside of the attack mode zone, which broke his right-front wheel cover off.

The restart is currently being investigated by the FIA.

Sims then led from di Grassi as da Costa served his drivethrough, but not long later the safety car returned when Robin Frijns lost the rear of his car in the downhill first sector and hit the wall at Turn 9, where he was stranded.

The race then restarted before Frijns car had been craned away and a full course yellow was hastily brought in to slow the pack again.

When the race did get going again on lap 22, di Grassi took his second attack mode, which dropped him to fourth behind Gunther and Vandoorne.

He used the higher power mode to take third from Vandoorne at Turn 18 on the following tour, but although he harried Gunther he could not get by before his speed advantage ran out.

Gunther marshalled the gap to di Grassi, which allowed Sims to run clear to take his first FE win after successfully navigating the chaos.

Di Grassi stayed ahead of Vandoorne, who had made his way up from 11th on the grid, to take third, with Edoardo Mortara taking fifth for Venturi Racing.

Oliver Rowland took sixth for Nissan after an immediate post-race penalty for overtaking under the safety car was handed to Porsche’s Andre Lotterer, who fell to 16th as a result.

Nyck de Vries rose to seventh despite starting 23rd, while Oliver Turvey ended up eighth thanks to Lotterer’s penalty and Buemi dropping to 14th despite crossing the line ahead of the NIO driver at the flag thanks to his own time penalty.

Daniel Abt, who served a drivethrough for a throttle map infraction early in the race, finished ninth, while Jaguar rookie James Calado took 10th and his first FE point from 21st on the grid.

Reigning champion Jean-Eric Vergne finished 11th after starting last thanks to his post-qualifying battery change penalty, but he could not capitalise on the chaos as he had to serve a 10-second stop-go, which was included in the same sanction.

Da Costa ended up 13th, while Wehrlein was 17th. Nico Muller pulled into the pits to retire late on.

Vergne consigned to last on the grid by battery change

Sergio Sette Camara will move to the NIO 333 squad for the 2022-23 Formula E season, departing the Dragon Penske squad after two-and-a-half years at the team.

Mahindra Formula E principal and CEO Dilbagh Gill will leave the team he has headed up since the championship's very first race in 2014.