Motorsport.com continues its annual countdown of the biggest stories in racing this year with the story behind Formula E’s step forwards with its Gen2 car. 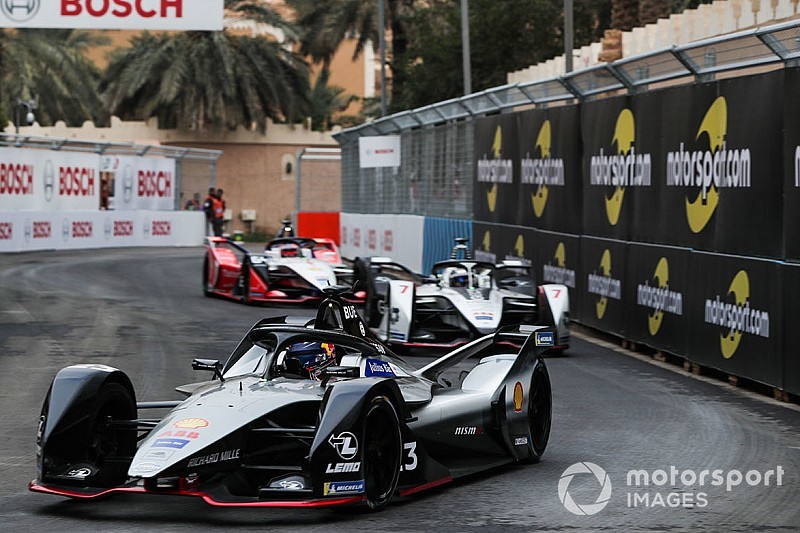 Formula E took a big leap for its fifth season of competition in 2018-19, as it introduced the new (halo-topped) Gen2 car into the world’s all-electric single-seater series.

Its first design was always going to be blighted with the ‘car swap’ stigma, but with new battery developments combating its range anxiety, this allows drivers and teams to race pretty much flat-out from start to finish.

With the enforced pitstop taking away a key strategic element, and a new brake-by-wire system in theory making the cars easier to drive, would the racing be as good as before? The evidence from the opening round in Saudi Arabia was a resounding ‘yes’.

The new ‘attack mode’ concept – with its origins firmly rooted in Mario Kart – allows drivers to get a power boost to aid overtaking, or claw into gaps by setting faster laptimes. And, if anything, the new braking system seemed to prompt more late-braking mistakes than ever.

The opening race was defined by technical infringements, however, as reigning champion Jean-Eric Vergne lost a nailed-on race win due to a drive-through penalty for gaining a power advantage during braking regeneration, exceeding the level specified by the FIA software implementation guide. It was perhaps the most 21st century motorsport penalty yet given (!) but rules are rules…

That problem also raised its head in qualifying, when the Audi (and customer Virgin) cars were also penalised for power spikes caused by a bump on the track, which their systems hadn’t accounted for due to restricted practice running by rain in the desert. But don’t expect these to be persistent problems, as teams are still getting to grips with their new cars in the street-course environment.

As things stand, it looks like the Gen2 era will last for some time to come, with the FIA contemplating an extension to its planned three-year cycle, which would mean that the Gen3 that follows – tipped for much higher performance married with pitstops to showcase ultra-fast charging – won’t appear until the 2022/23 season.

Teams will be allowed to develop their powertrains each season, with only the base chassis and battery staying the same in Gen2, and it will likely have a new bodywork kit makeover for the second half of its extended life.

Other recent developments from FE’s pipeline lie in the support race ranks. The new Jaguar i-PACE eTrophy one-make series also made its debut in Saudi Arabia, while an ‘Extreme SUV Series’ is planned for 2020 (the ambitious Roborace continues with its development behind the scenes).

Many new deals are also being reached off track – not least livestreaming of races on the BBC’s red button/website/iPlayer and YouTube in the UK – neatly filling a void of free-to-air motorsport, just as Formula 1 commits to its Sky Sports F1-only deal (apart from the British GP).

Couple that with a calendar that is more stable than ever – with megacities like Berlin, Paris, Mexico City, Hong Kong, Rome and New York on the roster – it seems a far cry from season one, when founder Alejandro Agag admits the series almost collapsed almost before it could find its feet.

As long as the automotive industry continues its electrification plans as promised, and the infrastructure is put in place to support it from a road car perspective, electric vehicles will continue their rise to prominence across the globe.

And as F1 struggles to define its long-term identity, the ever more manufacturer-laden Formula E (Mercedes and Porsche arrive next season) is perfectly positioned as the only motorsport show in town to support the shift to everyday electric.

Buemi "not in same league" as Techeetah in FE opener