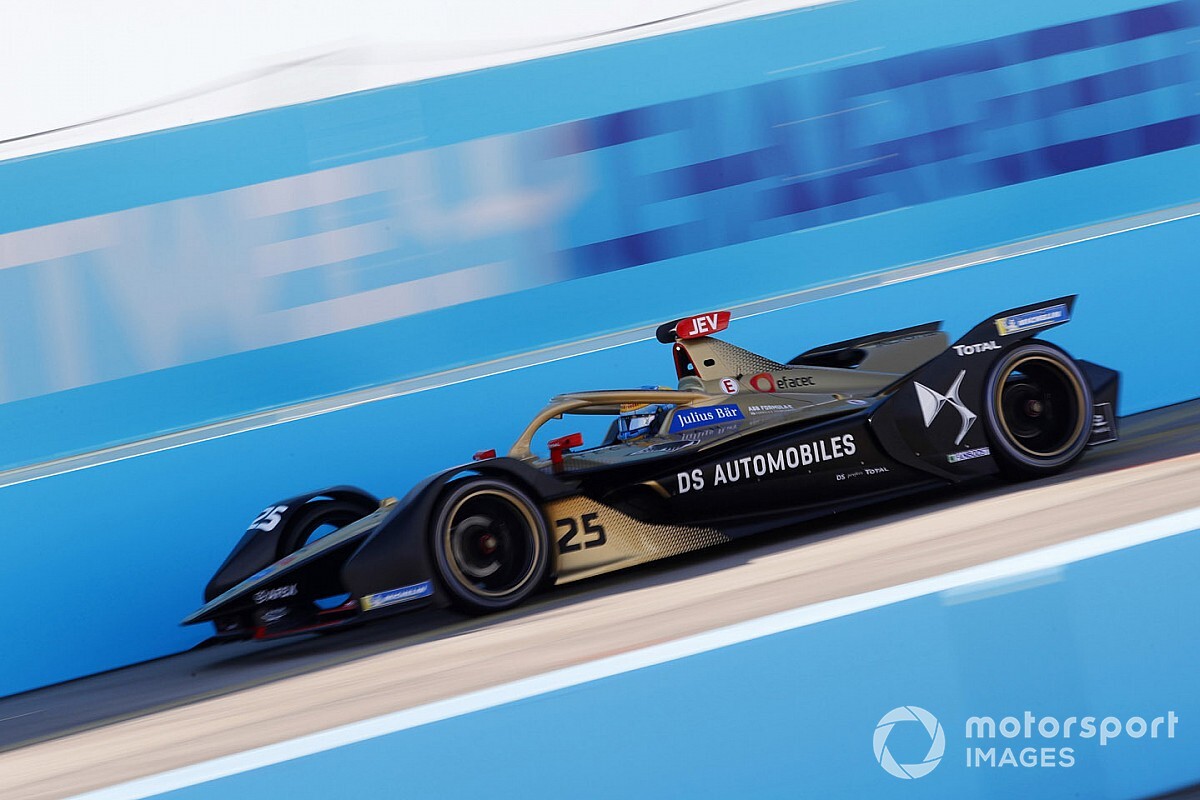 Having topped the group one session, reigning champion Vergne was the last driver to take to the track in super pole and he eclipsed runaway points leader da Costa by 0.14s to score back-to-back poles. It also meant DS Techeetah set a new Formula E record of five consecutive pole positions.

Vergne was 0.01s down in the first sector but recovered that through the second split with a 0.003s cushion to post the fastest time of the day and set his peerless 1m06.247s effort.

Da Costa, who will be guaranteed of the title if he wins the race at Tempelhof Airport today, was the first out in super pole and his brilliant second sector kept him at the top until Vergne’s flier.

Nissan e.dams driver Oliver Rowland reported that he was finally back to full one-lap confidence after his sizeable Santiago qualifying shunt, and he ran a comparatively distant third – 0.445s off the top.

He had been a direct match for Vergne after his group two run, setting an identical time but running to a provisional second by delivering his lap later in the session. Rowland edged out his team-mate Sebastien Buemi by only 0.12s, as a sizeable front-right lock up for Mercedes driver Nyck de Vries dropped him to fifth place.

Felipe Massa was a surprise super pole contestant after his messy first three races in Berlin, but a very good second and third sector took him through from group three to fourth and into super pole.

However, frustration with the brakes and over-heated rear tyres for the final-half of his second lap meant he was 0.67s off the pace.

Prior to super pole, da Costa had been watching on from the garage, clapping his survival into the top-six shootout, and he hung on to a top-six spot despite Alex Lynn and Rene Rast providing a late group four scare.

Rast crossed the timing line in a sound seventh, but the Audi driver was immediately relegated by Lynn, pipped by a narrow 0.013s as da Costa survived by 0.03s.

Mahindra Racing driver Jerome D’Ambrosio progressed to the final shootout in the first and third Berlin races but he lost 0.3s in the middle sector to rank in ninth.  Robin Frijns, who missed out on the race three spoils by 0.128s in the closest finish at the line in FE history, could only return 10th for Envision Virgin Racing.

Jaguar’s renewed pace, led by Mitch Evans, had been good enough for second in group one – the Kiwi driver only behind da Costa after the first session. But as the track surfaced evolved, he was consistently relegated to his eventual 11th spot ahead of Lucas di Grassi and Massa’s teammate Edoardo Mortara.

Again, several big names stumbled in the group stages, with BMW Andretti driver Alexander Sims ranking in 16th behind James Calado and Nico Muller. Sam Bird once more struggled in qualifying, adding a 17th-place start to his 20th from the previous day, but he still managed to out-rank Andre Lotterer for Porsche.

Behind NIO 333 pilot Oliver Turvey was Mercedes’ Stoffel Vandoorne – traditionally super strong in qualifying but he ran 0.356s off the pace in group one to remain at the mercy of the next 18 drivers.

Maximilian Gunther, who won the Saturday race over Frijns and Vergne, was the first driver to head out in the session and a slow all-round lap meant he was just 21st.

Ford won't use new GT as hypercar base - Multimatic

Ford won't use new GT as hypercar base - Multimatic