Tony Stewart made it back-to-back victories in the Camping World SRX Series by winning in dramatic fashion at his own Eldora Speedway on Saturday night.

The NASCAR Hall of Famer started last in the 12-driver field to lead twice for six laps – all in the last seven laps – and held off local star Kody Swanson to win the 50-lap feature.

It was the SRX Series’ second straight race on dirt and Stewart completed a sweep of both. He also won last week at Knoxville (Iowa) Raceway.

“Kody found the bottom. I couldn’t roll the bottom as good as he could. I was real dependent on being up on the top,” Stewart said. “I just think that’s what Eldora does – the complexion of the track changes during the race.

“I thought the top was good in the beginning in the main and then Kody got just crushing everybody on the bottom and got rolling through there. But the good thing was when he went by, everybody else followed him down there like they were in a parade and left the top open.

“And the longer we went, I finally got the momentum going on the top to get back by him.” 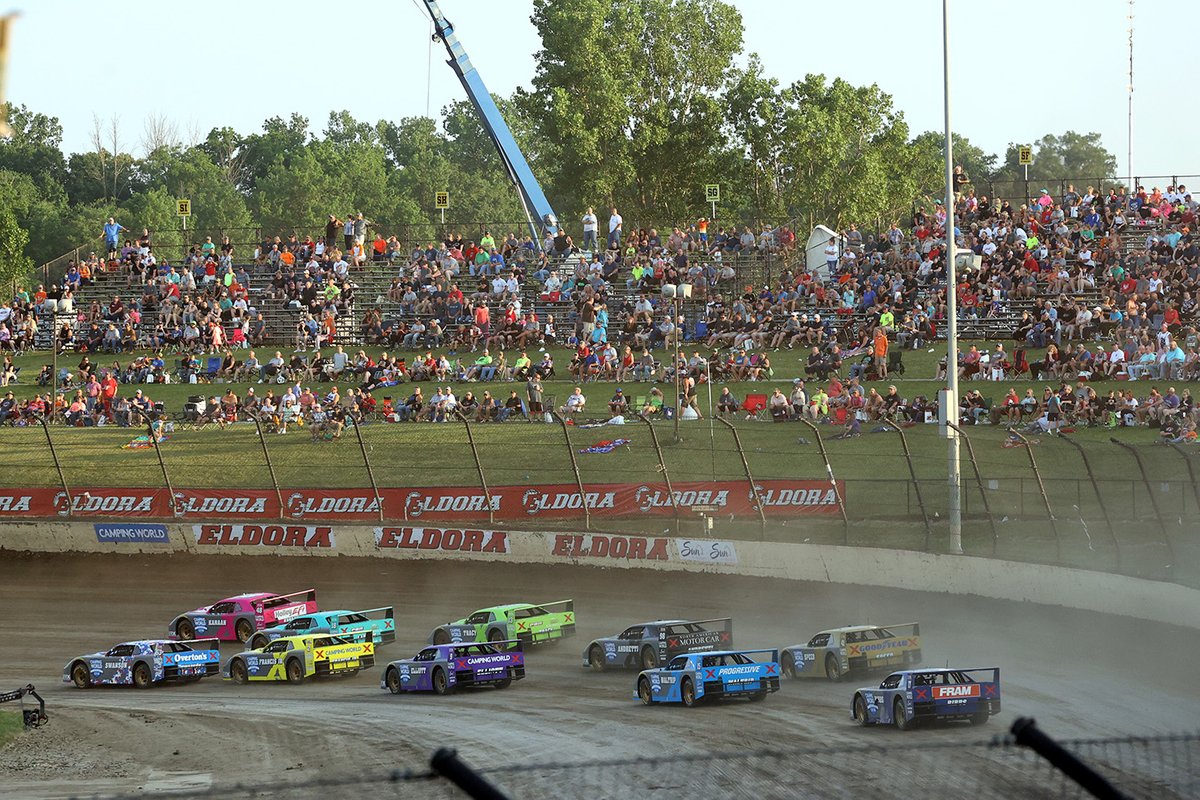 Swanson, the five-time USAC Silver Crown champion, ended up second and 2021 Indianapolis 500 champion Helio Castroneves was third and moved into second in the series standings.

Several drivers were left fuming at 2003 IndyCar champion Paul Tracy, who got into several incidents while trying to protect his position on the track, including one late in the race involving Bobby Labonte.

“I know I’m going to have some Bobby Labonte fans after me because he’s super pissed at me, and rightly so,” Tracy said. “He got by me on the restart. I was running on top and I decided I was going to cut to the bottom like Tony did and I just got it all wrong.

“He turned in a little earlier than I thought he would and I tagged him and that was it. So that was my bad and I went over to apologize to him he was having none of it.”

SRX heads next to Lucas Oil Raceway near Indianapolis on July 3; next is July 10 at Slinger (Wisc.) Speedway; and its season finale is July 17 at the Nashville (Tenn.) Fairgrounds Speedway.

Every Camping World SRX Series race is broadcast live at 8 p.m. ET on the CBS Television Network with streaming live on Paramount+ Premium.

Note: Starting lineup was based on average finishing positions in Heat Race Nos. 1-2.

Camping World SRX Series Standings (after Round 3 of 6):

Note: Points are awarded in both heats and the feature.