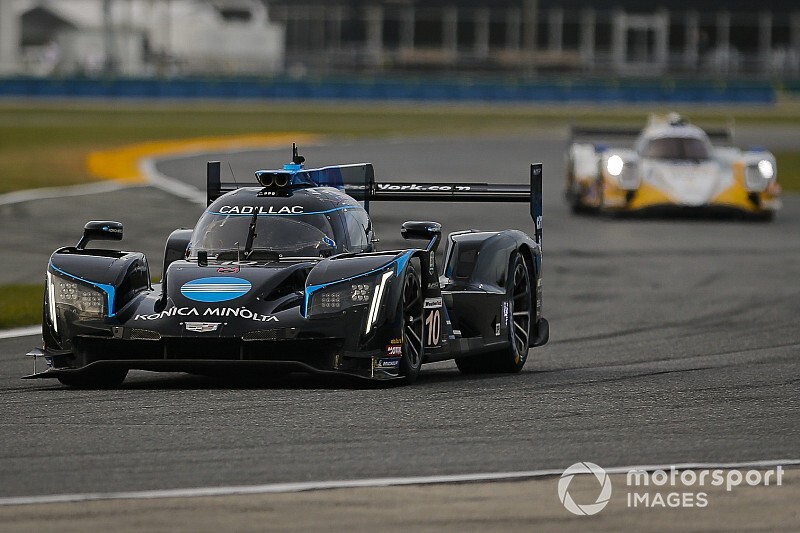 Kobayashi rattled off a series of strong laps in the #10 Cadillac DPi-V.R, ending with a 1m35.340s before he pitted.

Helio Castroneves was second fastest in the #7 Acura ARX-05 that crashed at the Bus Stop in the hands of Ricky Taylor during qualifying on Thursday, working down to within 0.393s of the fastest time.

Sebastien Bourdais was third quickest in the #5 JDC-Miller MotorSports Cadillac, ahead of Mike Conway in the #31 Action Express Racing entry.

Although this session is primarily aimed at teams making final preparations ahead of the 24-hour race, there were two red flags for crashes. The first stoppage was for the #47 Precision Performance Lamborghini of Mark Kvamme spinning at the Bus Stop, which caused some anxious avoidances as he came to a halt in the middle of the track.

The second red flag, which ended the session prematurely, was for the #38 Performance Tech Motorsports Oreca LMP2. Don Yount spun the car which ended up on its side on the inside of Turn 6. He scrambled from the car unhurt.

In GTLM, the new Chevrolet C8.R set the pace in Antonio Garcia’s hands. He lapped in 1m42.962s, seven tenths clear of Nick Tandy’s #911 Porsche 911 RSR-19. Laurens Vanthoor was next up in the sister Porsche, ahead of Bruno Spengler’s BMW M8 GTE.

The #54 Black Swan Porsche that was crashed heavily in practice at Turn 1 in the hands of Trenton Estep was back on track, albeit with a replacement chassis loaned by Wright Motorsports. Star driver Jeroen Bleekemolen was straight on the pace, ending the session in third, and the car appeared to run flawlessly.

Meantime, the #44 GRT Magnus Lamborghini Huracan, that missed qualifying due to a gearbox failure, also returned to action.