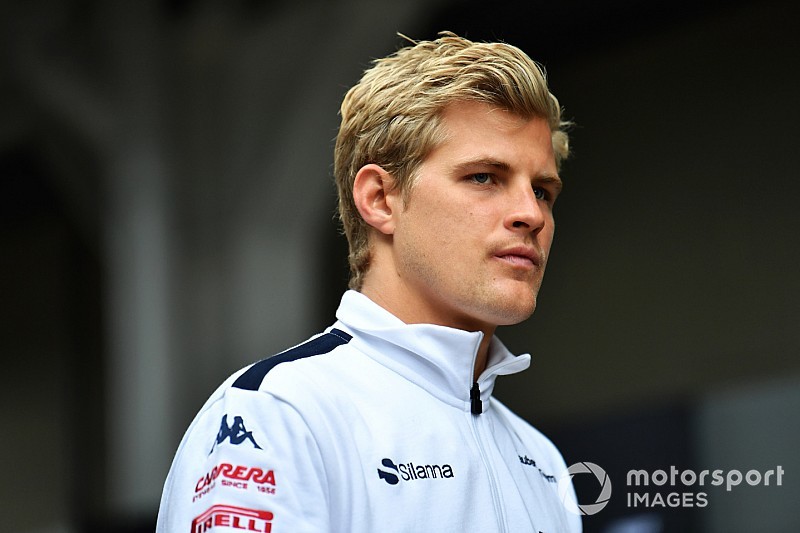 DM: Schmidt Peterson’s manager Taylor Kiel told me you had aced your first test for the team. Are you similarly happy with how the test went?

ME: Yeah, I’m very happy with it. It was a great first day, great to get started, and it was very positive. Everything went according to plan and I got used to the car and got into the rhythm a bit faster than I had expected, to be honest. So I have to give credit to the team there; they helped me prepare with all the pre-event information, so after a couple of runs I was ready to start pushing and start giving feedback and testing different things on the setup. Having been in F1 for five years, I was expecting it to take a bit longer to be honest, because it’s quite a big difference between the cars.

From your first impression, would you say there’s enough range of adjustability in an IndyCar to change the setup to suit your style or is it you who is going to have to adjust your style to suit an IndyCar’s basic traits?

Hmm, I think it’s going to be mix. Definitely as a driver you need to go in with an open mind and learn how a car wants to be driven to make it fast, but also I think my preferred driving style will suit the IndyCar quite well.

But that’s what made today so interesting. I started off driving the car the way I want, and then tweaked that a bit to suit the way the car was behaving, and then from the third run we were altering setup, trying different things that I felt would help it. We got some good answers there but already the setup that the team already had for Sebring was very good, and towards the end of the day we went back in the direction of that baseline setup and that was the setup I felt most comfortable with.

So I think that was a good sign – the way I’m driving is probably quite similar to the way James [Hinchcliffe] and Robbie [Wickens] were driving this year.

Switching from a car with power steering to one without it, do you find it harder to be precise with the steering inputs, kinda heaving it into the corners while still trying to hit your marks?

It’s interesting, yeah. I think that is something I found a bit more difficult and an area where I can still do better. In F1 with the power steering and so many tools, you can perfect the car in every corner. But with IndyCar, first of all it’s more heavy to drive and then also you cannot be so precise in the way you drive it, you have to drive around balance issues, because you have to accept the car cannot be perfect for every single type of corner.

But I got used to that quite quickly although, like I said, I can see where I can still improve. And actually it’s fun and to have a car like this because you feel you can do more as a driver to make the difference, to find the way around the balance issue. So in F1, you’re trying to use all these tools to get your car perfect and precisely right for every corner, but in IndyCar it feels like you have to find the best compromise setup for several corners and then it’s up to you as a driver to make the best job of what you’ve got, even if that means you have to battle the car a bit more. It’s very satisfying.

Sebring is notorious for gaining a lot of grip over the course of a day. With you and the three Penske cars out there laying down rubber, did you feel that gradual increase in grip?

Oh yes, definitely you could lean harder on the car near the end of the day to really push hard. And Sebring – it’s a special track, real old-school! It reminded me a lot of the tracks I was racing at and testing at in the UK in Formula BMW and Formula 3 – places like Pembrey and Croft. Quite tight, hard braking, good fun.

It’s funny; in F1 every track is getting more and more similar to each other – standard curbs and runoff, and things like that; everything smooth. But Sebring has so much character that every corner entry curb and exit curb is different from the one before. There’s more variation in this one short track than across several tracks in F1.

I’m guessing there’s 200-250hp difference between the Ferrari power unit you had in your Sauber and the Honda IndyCar engine. Were you disappointed by that drop or does the low downforce of these IndyCars help make the car still feel lively?

I actually felt it was a lot of fun to drive. I mean, sure, you can feel there was less power than F1, but you have to work so much as you drive, and to me the sensation felt very good, very enjoyable.

Will you get any simulator time before you do your first team test alongside James in January?

I don’t know to be honest. I’m flying back to Indianapolis with the team, stay there for a couple of days with them, then fly to Sweden for Christmas and New Year, and then I will move out to Indianapolis in January and settle into the team as good as I can.

When IndyCar first hosted a teleconference with you when you were confirmed with Schmidt Peterson, you said that you were looking at this as a longterm deal, that you weren’t just filling time before you got another opportunity in F1. Has today convinced you that you would like to race in IndyCar for several years?

Today was super-positive and I have come over here to be successful and do well in America. I don’t want to close any doors, so let’s see where it goes, but I definitely can see myself being over here for a long time. Everything with the team and the car so far feels very good and it’s exciting to have a new challenge to look forward to.