Ex-Aprilia MotoGP rider Sam Lowes vaulted into the lead of the Moto2 standings after securing a dominant lights-to-flag in the Teruel Grand Prix. 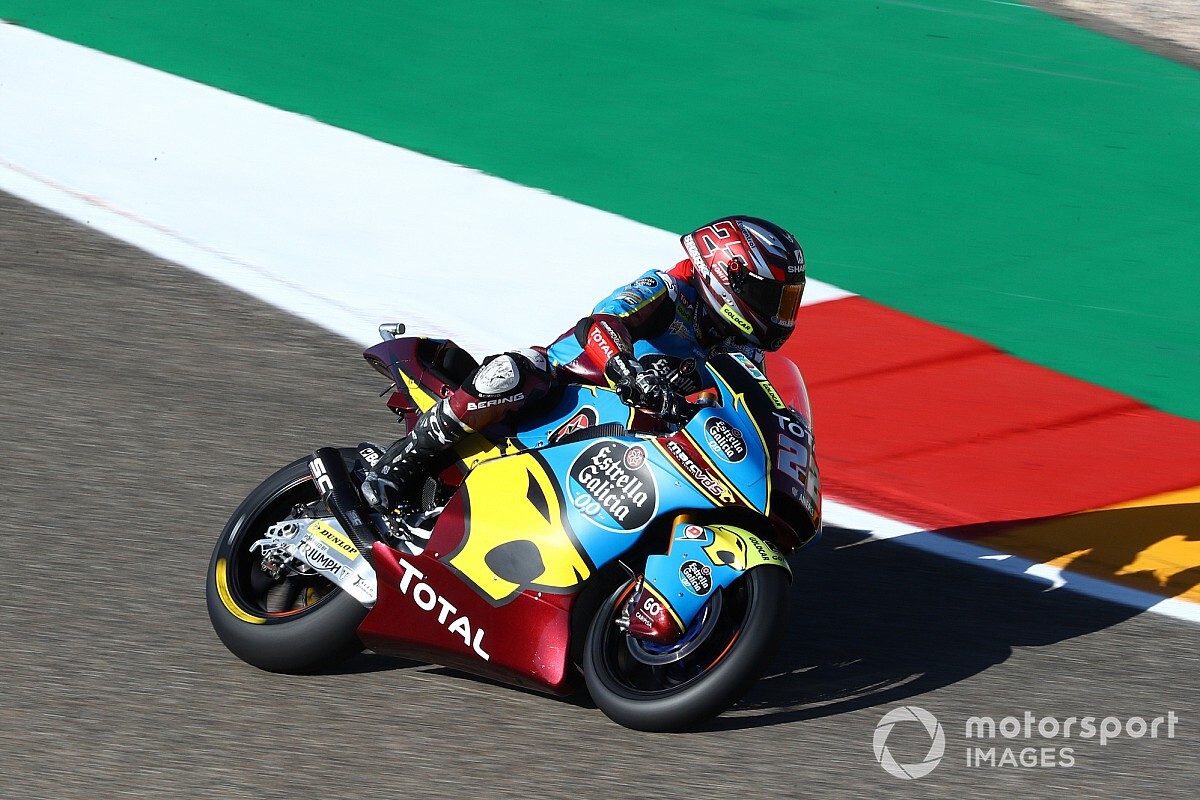 Lowes had capitalised on crashes for rivals to win the previous two races at Le Mans and Aragon, but the Marc VDS rider didn’t require misfortune on others’ part this time as he led every lap of the race to complete a hat-trick of wins.

Lowes got the holeshot from pole position to lead into Turn 1, with Fabio di Giannantonio passing Remy Gardner at the following corner to move up to second.

Petronas Sprinta rider Jake Dixon also dispatched Gardner on the opening lap to grab third after a rapid start from seventh on the grid, only for the SAG rider to repass him on lap 3.

But Gardner was himself demoted from the final podium spot just two laps later by Italtrans’ Enea Bastianini, who had arrived for the second Aragon race as the championship leader.

While Bastianiani had managed to jump up from sixth to third in the opening five laps of the race, the top two were already well up the road by then, with Lowes leading the race by two seconds and di Giannantonio having a 1.3s buffer over third place.

Lowes continued to stretch his lead from there on, doubling his advantage over the next six laps, before pulling another four seconds clear in the final part of the race.

The British rider eventually took the flag by eight seconds to take his sixth career Moto2 win, and move into the lead of the riders' standings for the first time in 2020.

Di Giannantonio enjoyed a clean run to second, with Bastianini finishing another two seconds down in third to remain within seven points of new championship leader Lowes.

Their title rival Luca Marini ran as high as eighth in the early laps of the race, but fell outside the points at one stage, before recovering enough to salvage an eight-place result.

Marini’s VR46 teammate Marco Bezzecchi’s title hopes all but ended when he crashed at Turn 1 on lap 4, having qualified a disastrous 14th. Bezzecchi now sits 48 points adrift of Lowes with just three rounds to run.

Back at the front, Gardner finished two seconds off the podium in fourth, with front row starter Jorge Navarro (Speed Up) taking fifth after recovering from a terrible launch that left him in the lower reaches of the top 10.

Jorge Martin was sixth on the lead Ajo bike, ahead of Dixon and Augusto Fernandez (Marc VDS), with American Racing Team pair Marco Ramirez and Joe Roberts completing the top 10.

Why America's latest MotoGP export could be a game changer